NSRI Kommetjie, on Saturday morning, (15th December), responded to reports of a paddler in difficulty on a surf-ski off Scarborough.
It appears that a Kommetjie man abandoned his surf-ski off  Scarborough and swam ashore after getting into difficulty. His brother, also from Kommetjie, paddled out on a surf-ski to try to recover the surf-ski but then also got into difficulty. he managed to get ashore further along the coast and his brothers surf-ski then also washed ashore.
No one was injured.
West Coast: 3 men towed safely to port in their cabin cruiser, not injured.
Three local men were towed, in their 40 foot cabin cruiser, by NSRI Yzerfontein, towards Mykonos, on Sunday afternoon, (16th). Their boat sustained engine failure 5 nautical miles off Yzerfontein and NSRI Mykonos took over the tow from NSRI Yzerfontein, at Vonderling Island and the cabin cruiser was safely towed to Mykonos.
Port Alfred: Two incidents, one a false alarm with good intentions and one a man missing in inland quarry waters.
NSRI Port Alfred, on Sunday afternoon, (16th December), responded following reports of a drowning in progress at West Pier, however when NSRI arrived on-scene it was confirmed that earlier in the day a six year old boy had fallen into the water at West Pier and his father jumped in after him to try to rescue him. Local fishermen managed to pull both of them out of the water and they were not injured.
It appears that some two hours later the NSRI were called when a member of the public, on hearing of the incident, thought that it had just happened.
NSRI Port Alfred, on Monday afternoon, (17th), responded to assist the Police Dive Unit at a quarry 15km inland of Port Alfred where a young man has gone missing in the quarry while swimming. A Police Dive Unit are continuing to dive search for the missing man. Police are dealing with any further enquiries.
Gordons Bay: NSRI assist paramedics to get injured man off a boat in the harbour.
NSRI Gordons Bay responded, on Monday morning, (17th), to reports of a man injured after falling while on a boat and suspected to have dislocated both shoulders. NSRI assisted with the incident inside the Gordons Bay harbour and the man was transported to hospital in a serious but stable condition by an ambulance.
It is suspected that the man fell on the boat, injuring himself, after the boat encountered choppy waters while leaving the harbour.
Simonstown: Nothing found following search for surf-skiers suspected to be in trouble.
NSRI Simonstown responded, on Monday morning, (17th), to reports from eye-witnesses of two paddlers on surf-ski’s in difficulty off  Millers Point.
Despite an extensive search no sign of surf-skiers in any difficulty could be found.
A subsequent event involving paddlers on surf-skiers paddling from Millers Point to Simonstown continued to shed no light on any surf-skiers in any difficulty despite the ongoing attendance of NSRI during the event and in the area of the suspected incident.
It is suspected that the two surf-skiers who were thought to be in difficulty were not aware that the NSRI had been called and they made it safely to shore or they may have continued with their paddle as no reports have been received of anyone overdue or missing that may relate to this incident.
Durban: Police dealing with an incident where a 13 year old girl is missing and in a separate incident a man transported to hospital following a fall on a beach.
NSRI Durban were activated on Monday morning, (17th), to reports of three people being swept out to sea at New Pier, Durban beachfront.
The SA Police Services Search and Rescue reportedly rescued two young men from the water and a 14 year old girl remained missing despite a search.
It was reported that the three were swept away in rip-currents.
Later in the day lifeguards located and recovered the body of the 14 year old girl from the surf and the body has been handed into the care of the Forensic Pathology Services.
Police are dealing with this case and have opened an inquest docket. NSRI have no further details.
NSRI Durban were activated to respond to Merebank beach, South of Durban, on Monday afternoon, (17th), following reports of a drowning in progress however on arrival on-scene it was confirmed that this was not a drowning but a 60 year old Durban man who had fallen at the beach and fractured a leg.
The man was treated by KZN Government Health EMS and transported to hospital by an EMS ambulance.
NSRI have no further details on this incident.
Durban beachfront – 17th December:
Tonight, between 18h00 and midnight, Monday 17th, NSRI Durban have dispatched NSRI rescue swimmers in support of lifeguards to assist manning beaches at Durbans main beach and along Durbans North Shore.
Lifeguards are on full alert. Lifeguards were kept busy last night (Sunday, 16th) with approximately 25 rescues of bathers from the water who got into difficulty while swimming in that area.
NSRI are urging bathers to exercise caution, swim within the safe demarcated swimming zones that lifeguards post on beaches (using their red and yellow flags), obey the instructions of the lifeguards and be cautious of rip-currents.
From the 22nd of December, 2012 to 04th January, 2013, media are requested to call the NSRI’s Andrew Ingram – 0829905977 or Meriel Bartlett – 0829947555 for media enquiries.
You can watch a six minute video on Rip currents here. 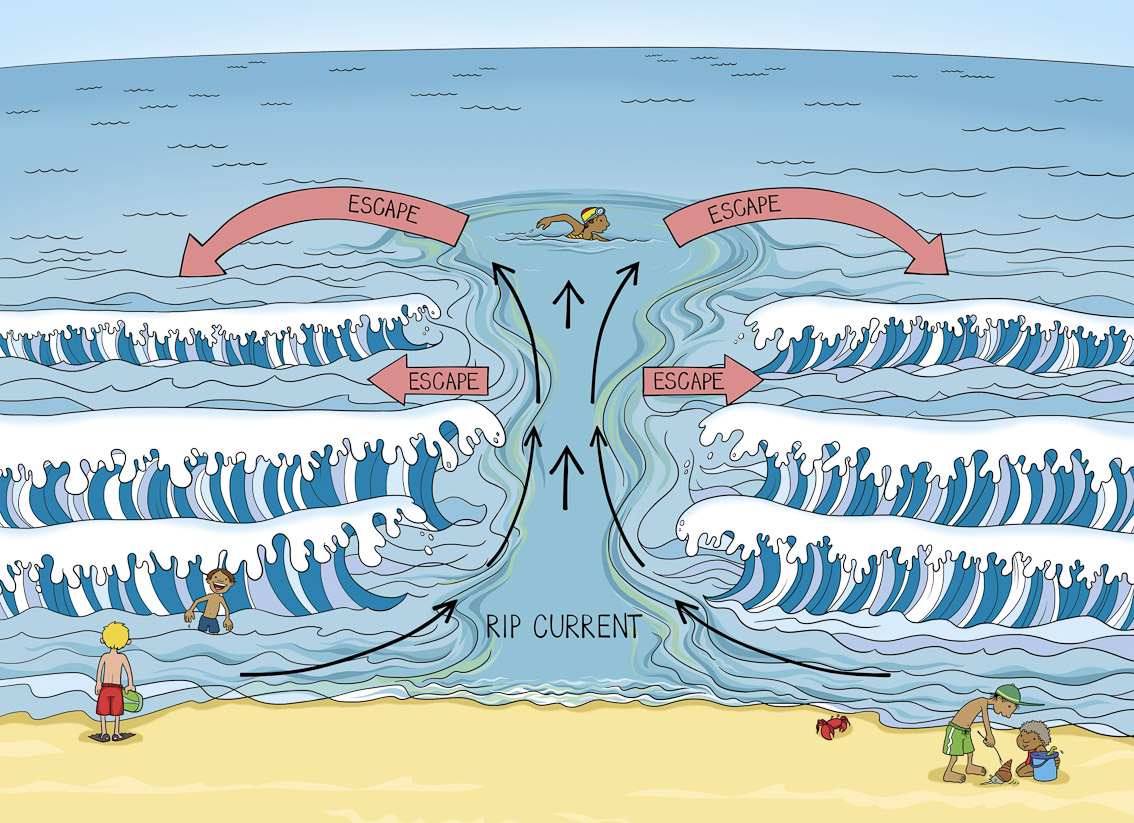