SEA POINT:Quentin Botha, NSRI Table Bay station commander, said:At 16h21, Friday, 05 July, NSRI Table Bay duty crew were activated following eye-witness reports of a drowning in progress at Sunset Beach, Sea Point.NSRI Table Bay, NSRI Headquarters and NSRI Bakoven dispatched rescue swimmers to respond to the scene.Sea rescue craft at NSRI Table Bay and NSRI Bakoven were prepared to be launched.WC Government Health EMS control activated the EMS/AMS Skymed rescue helicopter and Community Medics, Cape Town Fire and Rescue Services dive unit, Law Enforcement and Netcare 911 ambulance services were activated to respond.While responding to the scene it was confirmed that 2 woment were in difficulty in the surf caught in rip currents while swimming.A bystander, 23 year old Michael Veltman, a surfer and a Freelance Cinematographer, from Sea Point, who regularly surfs in the area, while driving past he noticed the commotion at Sunset Beach and on stopping his car and investigating closer he volunteered to launch into the surf to assist.One of the two girls, who were caught in rip currents, a 14 year old, had managed to reach the beach and safety and she required no assistance and Michael swam out to sea about 100 meters and on reaching a 19 year old woman, he was able to coach her to use the waves to get back to shore.Michael confirmed that the teenager showed a good presence of mind and did not panic, which helped the situation, and she appeared to him to be a good swimmer and together they used the incoming waves to swim towards the beach and they reached the beach as the first emergency rescue services were arriving on the scene.Paramedics medically assessed the 2 women, who are visiting family and they are both from the Northern Suburbs, and they required no medical assistance and no further assistance was required.NSRI commend the effort of Michael Veltman who assisted the teenage girl today.HERMANUS:Deon Langenhoven, NSRI Hermanus station commander, said:At 17h32, Thursday, 04th July, NSRI Hermanus duty crew were activated to assist Overberg Fire and Rescue Services and emergency services deployed to a local 53 year old woman who was trapped on the mountain above Hermanus with her dog, a poodle.During an attempt to recover her dog after the dog had fallen about half way down the mountain and was on a ledge, the lady became trapped on the ledge unable to go up or down the mountain with her dog.3 of our NSRI duty crew, trained in high angle rescue, responded in our sea rescue vehicle with additional equipment, and set up a high angle rescue rope system.An NSRI rescue medic, using the high angle rope system, abseiled to the woman and her dog and secured them and confirmed that they were not injured.WC Government Health EMS rescue squad and WSAR (Wilderness Search and Rescue), arrived and set up additional high angle rescue ropes and an EMS rescue technician and WSAR rescue technician abseiled to the site and in an operation lasting just over an hour the casualty and her dog were safely hoisted to the summit of the mountain and once safe off the mountain no further assistance was required.KNYSNA:Jerome Simonis, NSRI Knysna station commander, said:At 22h15, Thursday, 04th July, NSRI Knysna duty crew were activated following a request for assistance from 3 men on a row boat reporting to be trying to row home but were caught in increasing wind speeds and were not making headway and in the vicinity of the train bridge on the lagoon.Our NSRI sea rescue craft Jaytee IV was launched, an NSRI rescue vehicle and Knysna Fire and Rescue Services were activated and they dispatched rescue vehicles and responded.On arrival on the scene we found the 3 men safe but unable to row against the strong winds and we took them onboard our sea rescue craft and rigged a towline and towed their row boat safely to their destination at their mooring at the St James Jetty and no further assistance was required.DURBAN: 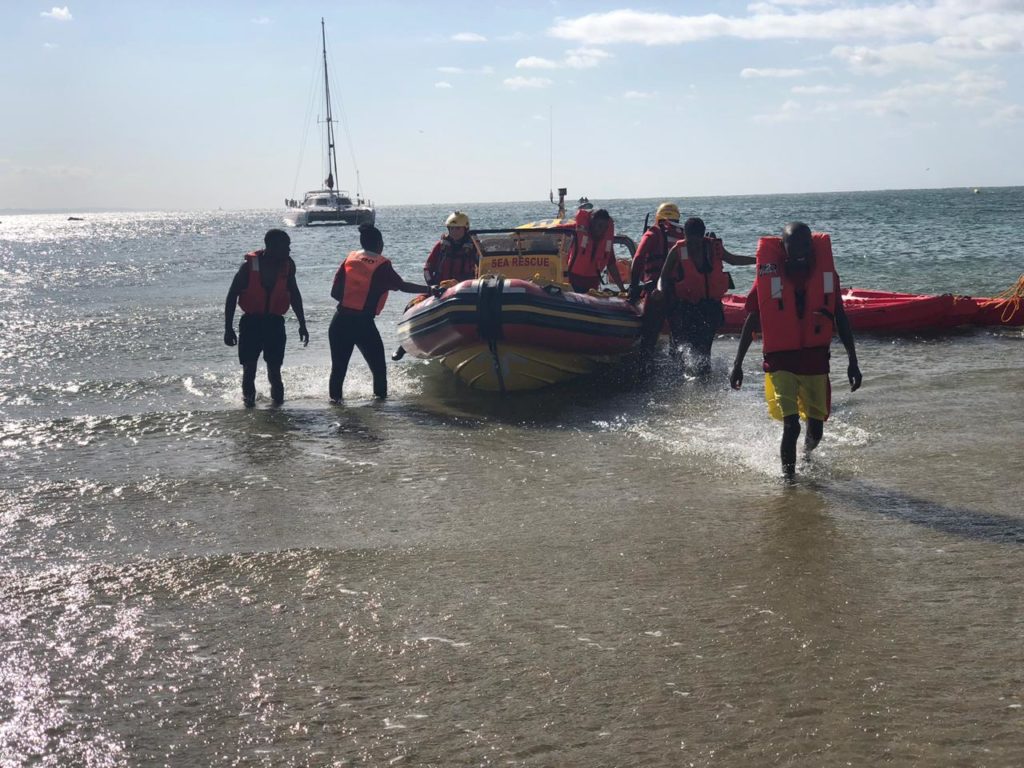 Andre Fletcher, NSRI Durban station commander, said:At 11h25, Friday, 05th July, an NSRI Development Training team, during regional training operations, were called to assist 3 double kayaks, with 2 persons in each kayak, ages 19 and 20, caught in strong winds while paddling and being blown out to sea off-shore of Vetchies Beach.The sea rescue craft Freemasons Way diverted to assist.On arrival on the scene the 6 casualties, males and females, were taken onboard the sea rescue craft and their kayaks were taken under tow and NSRI brought them safely to the beach where they reunited with friends and after being provided some rewarming measures by the NSRI medics for mild hypothermia no further assistance was required.At 14h11, Friday, 05th July, NSRI Durban duty crew were activated to assist the Catamaran Jolla II, sailing from Malta to Cape Town, and requiring assistance to get into the Port of Durban.Jolla II, with a Norwegian solo sailor onboard, initially required assistance deep sea off-shore of East London after suffering motor failure and a broken mast.He was monitored with the assistance of MRCC (Maritime Rescue Coordination Centre), Telkom Maritime Radio Services, NSRI Durban, NSRI East London, NSRI Port Edward, and by his wife who had a computer tracking site to monitored his progress on his voyage.On Wednesday it was confirmed that he had rigged a storm sail and was heading towards Durban and the rescue authorities monitored his progress and NSRI stations on the East Coast remained on alert.Arriving safely in Durban today, NSRI Durban and NSRI Ballito, aboard the sea rescue craft Alick Rennie and Spirit of Surfski 3 rendezvoused with the Catamaran Jolla II 1 nautical mile off-shore of Durban's Port.The Catamaran was taken under tow and towed safely to the International mooring at the Port of Durban and once safely moored he required no further assistance.