Howard Bell awarded with Directors' thanks

Howard Bell, from Bakoven, was awarded with a Directors’ Letter of Thanks for a rescue that he carried out on 06 January 2019.
The Letter of thanks reads:
'Howard joined Station 2 in 1983 and served as sea-going crew until August 2017 when he took on the role of station engineer. On the morning of 6th January this year he was in the station control room when a worried telephone call came in from a wife that her husband and friend had launched their kayaks from Bakoven beach but she could no longer see them.
Without hesitation Howard grabbed an unattended paddle ski he saw on the beach and paddled out along the channel to the open sea, to Bakoven Rock, to investigate. There he found both kayaks semi-submerged, one paddler afloat and the other clinging to the nearby Castle Rock. Getting the swimmer to hold on to the back of the paddle ski Howard towed him back to the beach.
Howard then commandeered an inflatable stand-up paddle board from its owner, tied its leash to one of his legs and towed it out to Castle Rock. There he persuaded the second casualty to slide off the rock onto the inflatable and by dint of hard paddling in the freshening wind, towed the stand-up paddle board and its badly lacerated occupant, back down Bakoven channel to the beach, where the two kayakers were treated for exhaustion, hypothermia and the injuries they sustained during their ordeal.
Howard Bell’s actions that day, in acting without hesitation and no thought for his own safety, were in the finest traditions of the NSRI and we are delighted to record his efforts in this way.' 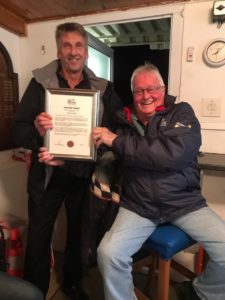