ST LUCIA:Jan Hoffman, NSRI St Lucia station commander, said:At 11h45, Saturday, 20th April, NSRI St Lucia duty crew were activated following reports from Netcare 911 ambulance services who were responding to Jabula Beach, St Lucia, to a drowning in progress.Our NSRI duty crew responded and on arrival on the scene we found a 14 year old female had been removed from the surf reportedly by bystanders and was on the beach where our NSRI medics initiated CPR (Cardio Pulmonary Resuscitation) efforts and were joined by Netcare 911 paramedics.Sadly, despite extensive CPR efforts, the teenager has been declared deceased and her body has been taken into the care of the Forensic Pathology Services.Police have opened an inquest docket.Condolences are conveyed to family.RICHARDS BAY:Jacques Kruger, NSRI Richards Bay duty coxswain, said:During the afternoon of Friday, 19th April, NSRI Richards Bay duty crew, on routine training aboard the sea rescue craft Spirit of Round Table II , following a request for assistance from the Richards Bay Ski-boat Club, diverted to assist their member ski boat with 2 crew onboard experiencing motor failure from a fuel line ruptured.On arrival on the scene, in the vicinity of the Richards Bay lighthouse, we set up a towline and towed the craft without incident to the ski boat club and no further assistance was required.On Saturday, 20th April, at 09h19, our duty crew were activated to assist a yacht returning from the Inhaca yacht race and unable to make way due to damage sustained to their boom during the night and with motor mechanical failure to their motor they drifted off-shore of Richards Bay and we launched the sea rescue craft Spirit of Richards Bay and rendezvoused with them and a towline was rigged and we towed them to their moorings without incident and no further assistance was required.ROCKY BAY:Kevin Fourie, NSRI Rocky Bay station commander, said:At 09h29, Friday, 19th April, NSRI Rocky Bay were activated following reports of a drowning in progress at a beach in front of the caravan park - a beach that is not protected by lifeguards.Our NSRI rescue swimmers and Tower 13 Lifesaving lifeguards responded.On arrival on the scene 2 Tower 13 lifeguards entered the heavy rough sea surf to assist 4 males (2 adults, a teenager and a child) caught in strong rip currents.The lifeguards are commended for rescuing the casualties in trying conditions and getting them safely to shore and no one was injured.KOMMETJIE:Ian Klopper, NSRI Kommetjie station commander, said:At 08h15, Saturday, 20th April, NSRI Kommetjie duty crew, CoCT (City of Cape Town) Law Enforcement and CMR (Cape Medical Response) ambulance service were activated following reports of a boat capsized off-shore of the Kommetjie boat slipway with 3 persons onboard and the 3 crew reported to be sitting on the upturned hull of the capsized casualty boat in a dense kelp bed.On arrival on the scene the sea rescue craft Spirit of the Vines and IL Batello were launched and our rescue swimmers were deployed into the surf and reached the 3 casualties finding them unharmed and we used our 6 Inch floatation boat to get the casualties to shore and we righted the casualty craft and then towed the casualty craft ashore where it was recoveredThe 3 local casualties were treated for mild hypothermia and no further assistance was required.MYKONOS:Mike Shaw, NSRI Mykonos duty controller, said:At 12h54, Saturday, 20th April, NSRI Mykonos duty crew were activated following reports of a small open motorboat capsized at Hobie Beach with 6 crew onboard, 3 adults (a male and 2 females) and 3 children (2 males and a female).Our sea rescue craft Spirit of Rotary East London was launched and our NSRI rescue swimmers and Atlantic ambulance services and WC Government Health EMS responded.On arrival on the scene the 6 casualty crew were found already safely ashore and treated by NSRI medics and paramedics for minor cuts and bruises and we righted and recovered their craft and no further assistance was required.PLETTENBERG BAY:Ross Badenhorst, NSRI Plettenberg Bay deputy station commander, said:At 12h13, Saturday, 20th April, NSRI Plettenberg Bay were activated following a request for assistance from a Port Elizabeth group of day hikers on the Robberg Nature Reserve trail reporting an adult female hiker in their party injured with a suspected fractured or strained Patella at The Point.Her husband, a doctor, had initiated medical treatment and confirmed that she would not be able to hike any further and medical evacuation assistance was required.We dispatched our sea rescue craft Leonard Smith and Free Runner and on arrival on the scene we put our NSRI rescue swimmers ashore and they secured the patient into our floating stretcher and in between wave sets our rescue swimmers swam her through the surf and loaded her onto the sea rescue craft and we transported her to our sea rescue station where she was collected by a family friend who is also a doctor.Her husband and the rest of the hikers hiked to the car park. 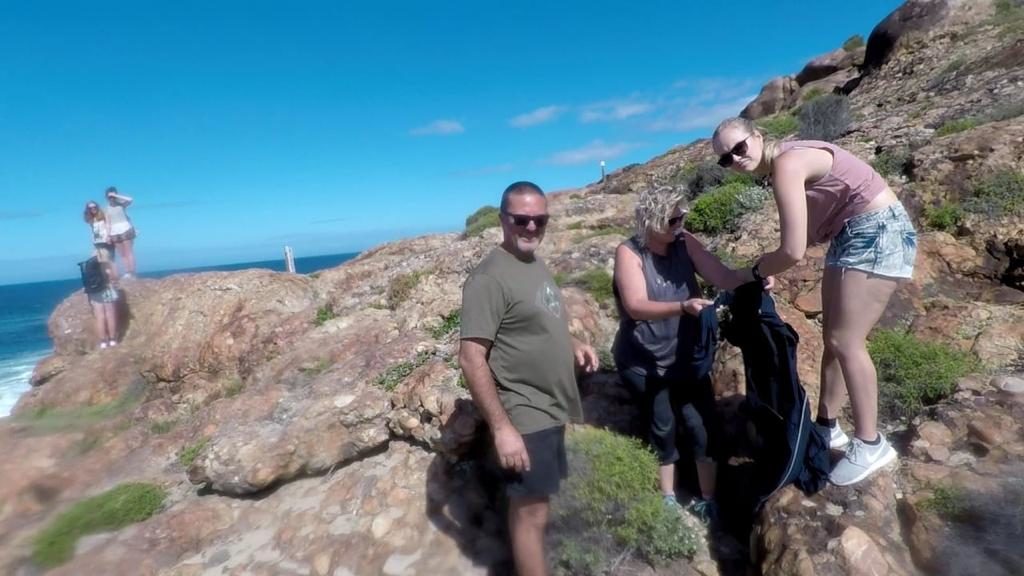 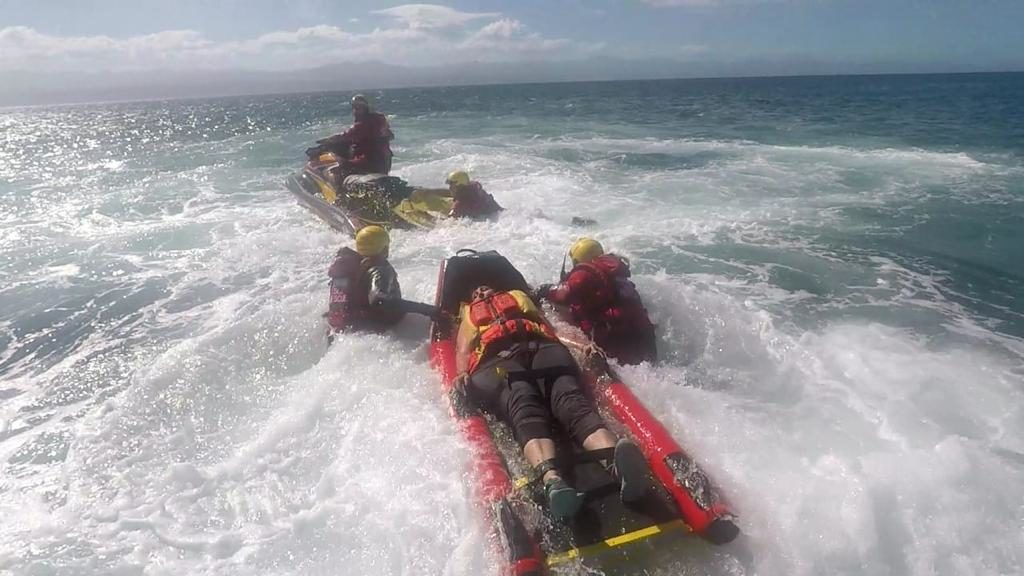 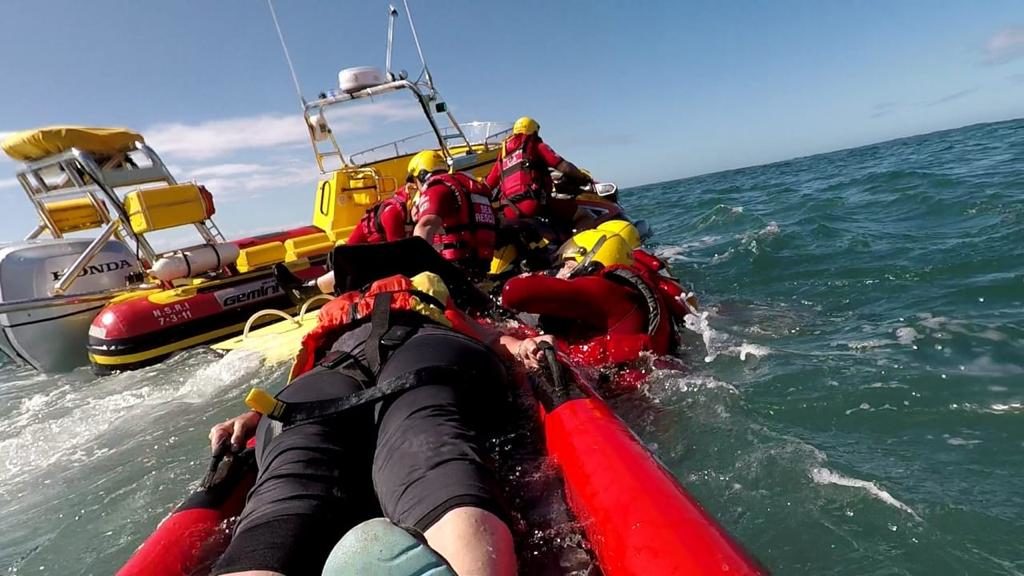 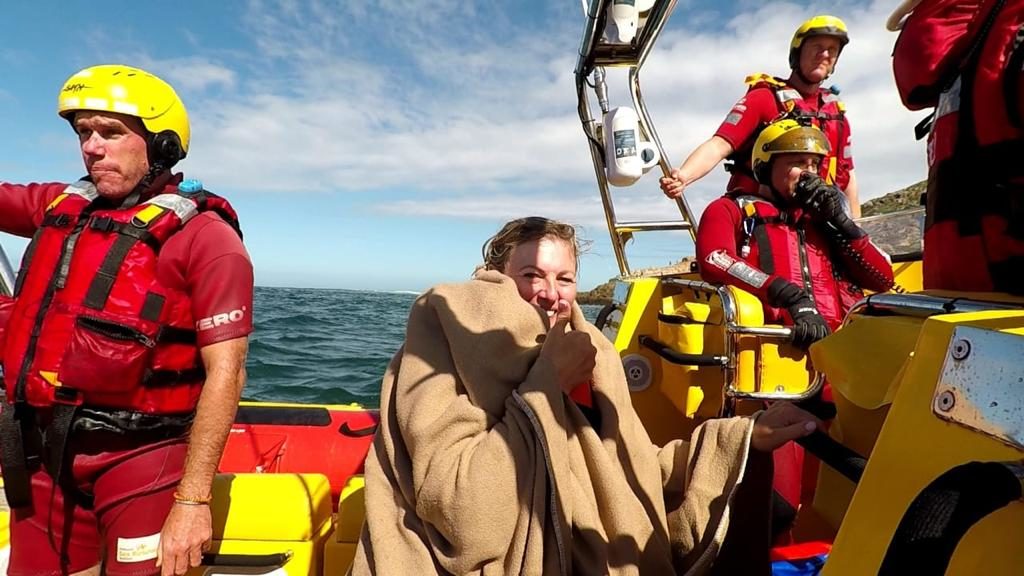 PORT EDWARD:John Nicholas, NSRI Port Edward station commander, said:At 09h00, Saturday, 20th April, NSRI Port Edward duty crew were activated following reports of a drowning in progress at TO Beach, Port Edward.Our sea rescue craft Wild Coast Sun Rescuer was prepared to launch and Tower 13 lifeguards, Police Search and Rescue and Med-Evac ambulance services responded and NSRI Shelly Beach dispatched a rescue team.2 Tower 13 lifeguards swam after the 2 casualties, adult males on body boards, in heavy surf conditions of 3 to 4 meter breaking swells.On reaching the casualties and using the floatation of the lifeguards rescue torpedo buoys and the added assistance of the floatation aid of the 2 body boards between the 4 of them (the 2 lifeguards and the 2 casualties) they were able to negotiate the strong currents, wave wash and heavy swells to reach rocks and were able to get to safety and then safely made their way to the beach.No one was injured and the Tower 13 lifeguards are commended for this rescue.AMANZIMTOTI:NSRI are informed that eThekwini lifeguards rescued an adult man caught in strong rip currents and who was being swept out to sea in rough sea conditions at a beach not protected by lifeguards at Amanzimtoti.The 3 lifeguards are commended for their efforts negotiating rough sea swells and strong currents to reach the man who they brought safely ashore and who was not injured.NSRI are urging the public to swim at beaches only where and when lifeguards are on duty and swim in the protected area marked by the lifeguards using their red and yellow flags.The full moon Spring Tide - a higher than normal high tide and lower than normal low tide, remains in effect for the duration of this long weekend and into most of next week and public caution is advised.
TO REPORT A SEA RESCUE EMERGENCY DIAL 112 FROM A CELLPHONE
Share