On Wednesday the 1st of January, at 14h33, NSRI Port Elizabeth and Police, including a Police Dive Unit, responded to the Swartkops River where it was reported that a child had disappeared under water after being caught in the river currents.

NSRI Port Elizabeth launched a sea rescue craft 2 km downstream from the incident, which had occurred 5km upstream, of the Swartkops River Mouth. Police divers were escorted to the scene aboard the sea rescue craft where a search commenced for a 12 year old local boy.

Lifeguards and Coastal Rescue joined in the search and an NSRI Quad Bike and 4×4 rescue vehicle were used to search downstream.

Despite an extensive search no sign of the child has been found and Police will continue to search.

It appears that the child was with family at the river when he was caught in the flow and swept down river. His family tried desperately to rescue him; including forming a human chain into the river to try to grab hold of him; but their efforts failed the child disappeared under the water.

Later that same day, NSRI Port Elizabeth responded back to the scene where it was suspected a body could be seen floating in the water but the object was found to be a tree log.

On returning to base from that call the crew aboard the NSRI sea rescue vehicle came across a man lying in the middle of the N2 Freeway.

NSRI volunteers set up a safety cordon around him to prevent him from being run over by passing cars and the Police were summoned.

NSRI volunteers carried him to the shoulder of the road on a trauma board and on their arrival Police took over his care and took him to a place of safety.

It appears that the man had passed out on the road following New Years eve celebrations.

Despite an extensive search no sign of the missing man has been found and Police will continue a search.

At 15h45 the 1st of January, NSRI Wilderness, the SA Police Services, lifeguards, SA National Park rangers, WC Government Health and ER24 ambulance services responded to Wilderness Beach between Steps and the river mouth where it was reported a drowning was in progress.

Neither of the two men needed to be taken to hospital.

Later that day, at 23h34, NSRI Wilderness responded back to the same place as the 15h45 incident to conduct a search after the family of a missing man had arrived home to find that one of their family members, who had been caught in rip currents at the same time as the incident at 15h45, had not arrived home.

At the time of the incident no one had come forward to tell the emergency services that a third man may still be missing in the water.

A search has revealed no sign of the missing man.

While it is suspected that a man may still be missing at sea Police are investigating.

From about 12h05, on the 1st of January, assistance was provided to a Jet Skier to retrieve his jet-ski and also his quad bike that got stuck in the surf. Assistance was also provided to get the Jetski and trailer off the beach when the vehicle got stuck as well. The entire incident took over two hours.

Then at 14h10 the NSRI Jeffreys Bay sea rescue craft and Discovery Rescue Runner was launched, as a precaution, to investigate what appeared to be a swimmer directly in front of the Sea Rescue Jeffreys Bay base in difficulty in the water. After speaking to the swimmer it was established that the swimmer was not in trouble and just swimming.

Then at 16h30 a call was received from the SA Police Services reporting a drowning in progress off Main Beach, Jeffreys Bay. The Sea Rescue craft, Loved 1s24:., already on the water at the time on routine patrol, diverted to Main Beach, after a thorough search of the area and various discussions with lifeguards, it was decided to call off the search as it was established that the Lifeguards had assisted a person in trouble out of the water in the same timeframe as when we received the call. The search was called off at 17:00.

Then at 18:20, a father brought his 4 year old son to the NSRI Jeffreys Bay base who had suffered burns to his foot after stepping onto burning coals on the beach. The 4 year old boy was treated by our crew. After consultation with the NSRI Jeffreys Bay Station Doctor, the child was handed into the care of his Father, with instructions for care and to ensure that he gets his son to a doctor as soon as possible. 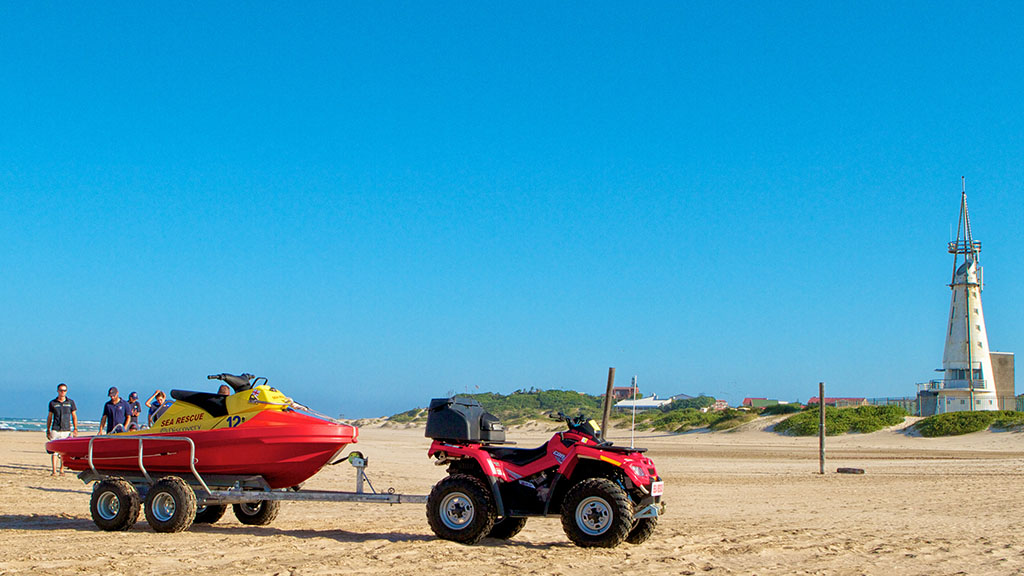 NSRI Richards Bay responded at 09h28, Thursday the 2nd of January, following reports from the fishing boat SUMMER ANJANI that they had happened upon the body of a man floating in the sea 2km off-shore Richards Bay. The boat remained on the scene to direct rescuers to the body.

On arrival on the scene the body of an adult man was recovered onto the sea rescue boat and brought to shore where Police and the Forensic Pathology Services took it into their care.

The body is unidentified and no one has come forward to report a missing person and it is unknown what caused it to be floating in the ocean.

Then at 10h30 NSRI Richards Bay responded to reports of a drowning in progress at Palm Beach.

Bystanders, bathers and surfers, rescued 3 women, from the North West Province, a mom aged 47 and her two daughters aged 11 and 12, from rip currents bringing them safely to shore.

They have been transported to hospital by Netcare for observation for  secondary drowning symptoms.

At 10h00 the 2nd of January, NSRI Witsand responded a sea rescue craft to assist a 16 foot boat CHEETAH, with 4 adult men on board which had run aground onto rocks after running out of fuel. The boat had drifted onto the rocks at Infanta, on the South side of Breede River.

One man, the skipper, had suffered a slight knee injury.

They required no further assistance.

NSRI Simonstown responded at 10h23 on the 2nd January to rendezvous with the dive charter boat PISCES reporting a 34 year old Russian woman suffering a dislocated right shoulder. The injury occurred after when she bumped into a fellow divers dive cylinder while they bailed backwards off the dive boat to go for a dive.

The woman was stabilized by NSRI medics and the CMR paramedic before being transferred onto the sea rescue craft and brought to shore at Millers Point where she has been taken by a CMR ambulance for treatment at hospital.

The woman is on holiday in South Africa.