On Monday 04th February at midday, NSRI was alerted following reports from the yacht DOUGHTY, that one of their crewman, 56 year old Eric Manshoven from Germany, had fractured his left hand after their boom broke in rough sea conditions off Coffee Bay on the Transkei Coast. Doughty was sailing from Durban to Cape Town with a crew of 6, 2 women and 4 men.

While preparing to launch a sea rescue operation NSRI Port St Johns were stood down and NSRI Port Edward were alerted to be prepared to launch to casualty evacuate the patient off the yacht when it was closer to Port Edward.

At 13h15 NSRI Port Edward crew launched the sea rescue craft WILD COAST SUN RESCUER and rendezvoused with the yacht 25 km South of Port Edward in 5 meter swells and a 25 knot South Westerly wind, 1 km off the Sikaba River Mouth. The patient was found to be in a stable condition with his left hand bandaged (following first aid treatment that had been administered by his fellow crew following the damage to the boom of their yacht). He had three fractured fingers on his left hand, and was transferred onto the sea rescue craft and brought to shore at Port Edward.

The skipper’s fiance, was also brought off the casualty yacht to accompany the patient to hospital.

The yacht is continuing back towards Durban, with her remaining 4 crew onboard, where they will effect repairs to the yacht and wait on the recovery of their fellow crewman. 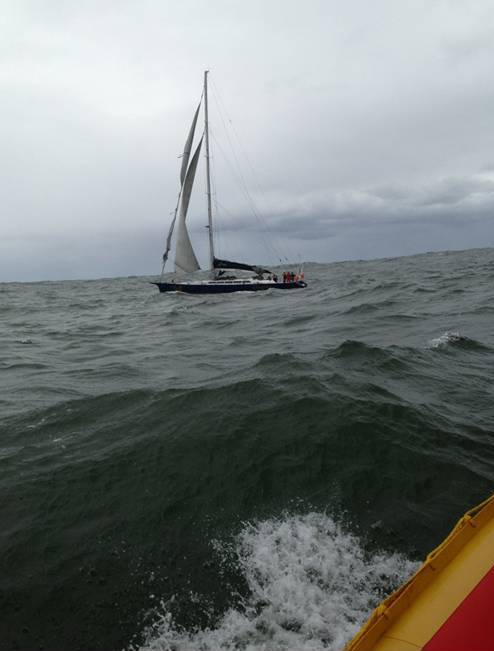