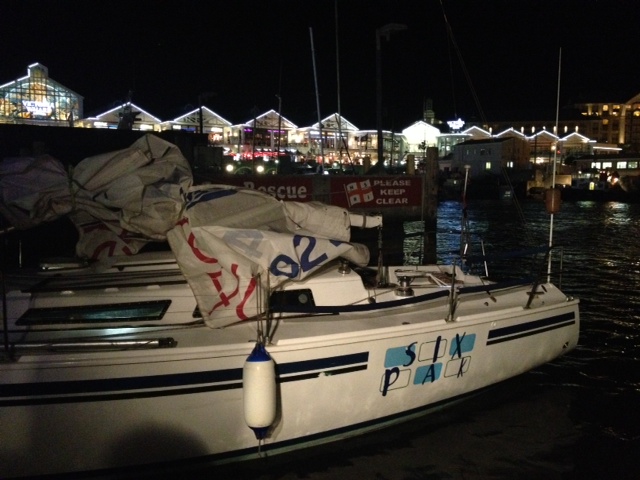 Pat van Eyssen, NSRI Table Bay station commander, said: “On Friday, 11th January, at around 19h30 an NSRI volunteer at the Royal Cape Yacht Club was informed by yacht club members of an overdue yacht, the 34 foot yacht SIX PAK, with 4 crew onboard, sailing from Saldanha to Cape Town.

“Attempts were made to raise the yacht SIX PAK by VHF radio and after attempts failed the Telkom Maritime Radio Services were alerted and they managed to raise the yacht by VHF radio.
“The skipper, Martin Winter, informed us that they were experiencing mechanical motor problems in the 50 knot winds but were not in any dire emergency and were seeking to shelter at Granger Bay.
“NSRI Table Bay volunteer sea rescue duty crew were placed on alert.
“Later, at around 20h45, the skipper informed us that they were at shelter in Granger Bay but their motor was not able to engage gears and they requested assistance to be towed into Port.
“Our NSRI volunteer crew launched our sea rescue craft SPIRIT OF VODACOM and on arrival on-scene the yacht was taken under tow and brought safely to berth at the V&A Waterfront at 21h15 where they required no further assistance.”