At approximately 12:00pm on Saturday 7th May a multiple emergency situation developed off Robben Island, shortly after the Cadiz Freedom Swim, from Robben Island to Big Bay, had been called off by race officials due to the strong South Easterly winds and developing rough seas.
While the support boats were returning to their various launch sites from Murray Bay, Robben Island, a distress call was received about a single engine vessel, Odyssey, that had taken a wave over their bow and, due to a blocked scupper, was swamped and sinking east of Robben Island light house.

Spirit of the Vines, Mens Health Rescuer and Discovery Rescue Runner 4 from Melkbosstrand were all close by and responded to the distress call. 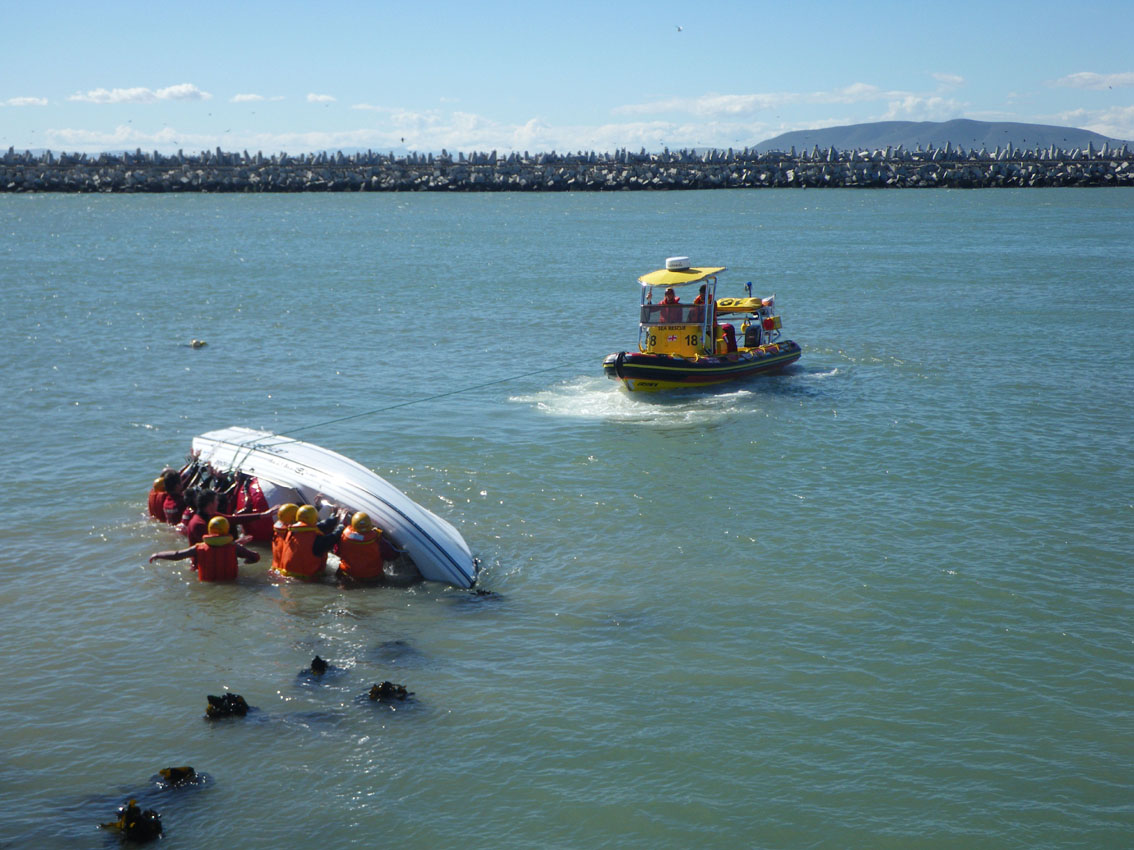 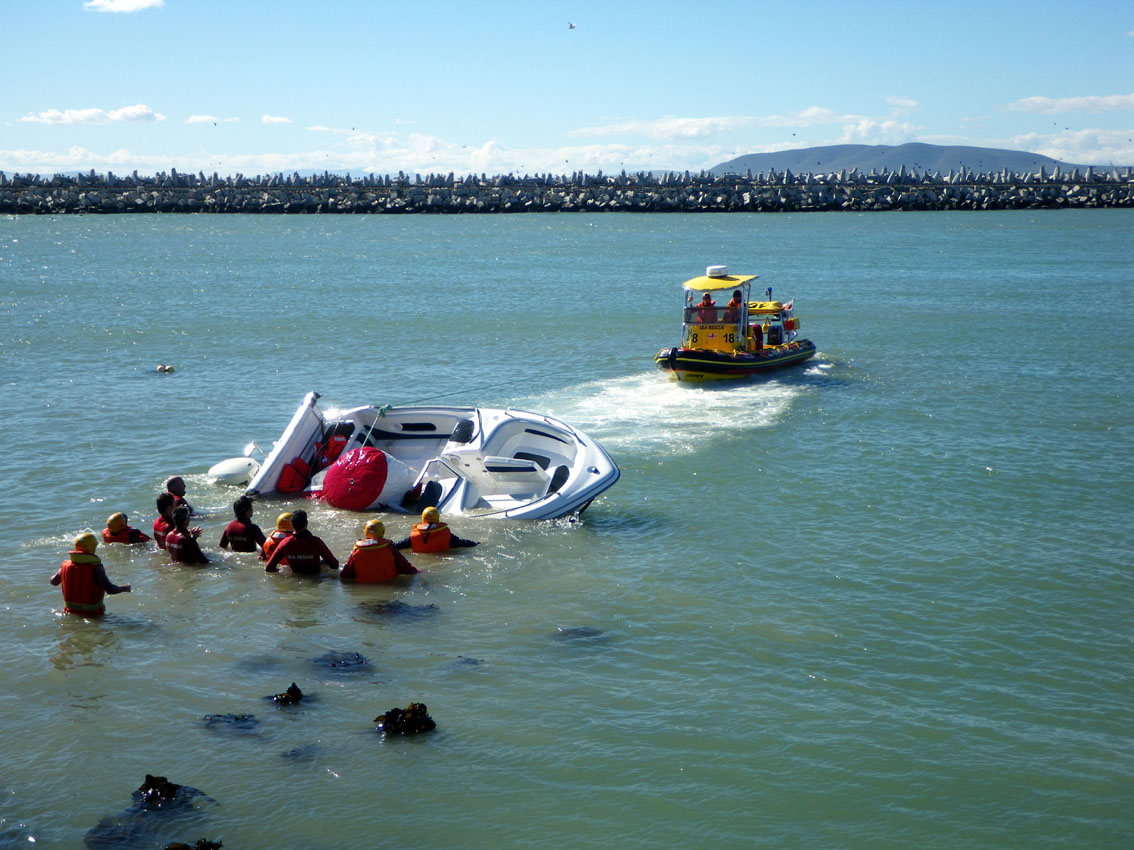 On arrival the crew of Odyssey were found to be uninjured. Their craft however was at a 45 degree angle and almost entirely under water.
Fortunately the single outboard had not cut out despite being almost entirely submerged and the skipper of the vessel showed great tenacity in maintaining forward momentum on his mostly submerged craft.
Spirit of Vodacom from NSRI Table Bay in the interim responded to a second distress call from a ski-boat of the same hull design, also sinking, some 800m away.
The 3 rescue vessels from Melkbosstrand focused on the first Odyssey. The skipper was asked to turn to starboard and run with the wind and swell on his stern, in the direction of the relatively sheltered Murray Bay beach some 800m away. By this stage the vessels entire steering column, throttle controls and starboard side where fully submerged however the vessel was still making headway.
Two NSRI crew were transferred onto the moving vessel to assist with stabilising it to an even keel and assist with bailing.
Approximately 500m off the beach the outboard started losing power, and the skipper of the swamped vessel was then advised to run his vessel hard aground onto the beach to prevent it from capsizing. After successfully beaching the craft, our NSRI crew assisted with turning the flooded vessel to face into the oncoming surf.
After approximately 30 minutes of draining the water from the boat a towline was set up and the boat was towed by Spirit of the Vines into the shelter of the nearby harbour and moored. The vessel was later towed back to Table Bay harbour by Spirit of Vodacom from NSRI Station 3.

The skipper of the Oddesey is commended for remaining calm and immediately actioning advice received from NSRI, throughout the operation.
During NSRI Table Bay and NSRI Melkbosstrand’s attendance to the two swamped vessels, a third distress situation developed when the private vessel “Blue Skye” came down hard off a breaking swell whereupon one of their crew, who was seated at the time, suffered a suspected spinal injury.
The casualty was  stabilised and immobilised onto a backboard, and then transferred to Robben Island harbour by Rotary Endeavour for a subsequent AMS helicopter evacuation.

In the interim a 4th distress call was received from the vessel “Dream On” reporting motor difficulties approximately 3 Nautical Miles South of Robben Island. The vessel was not in immediate danger and still had one outboard motor running. Rescue 18 Alpha responded, however while on route, “Dream On” confirmed that they were being assisted by a private vessel “Voluptuous” who was accompanying them back to their launch site and that they no longer required assistance. 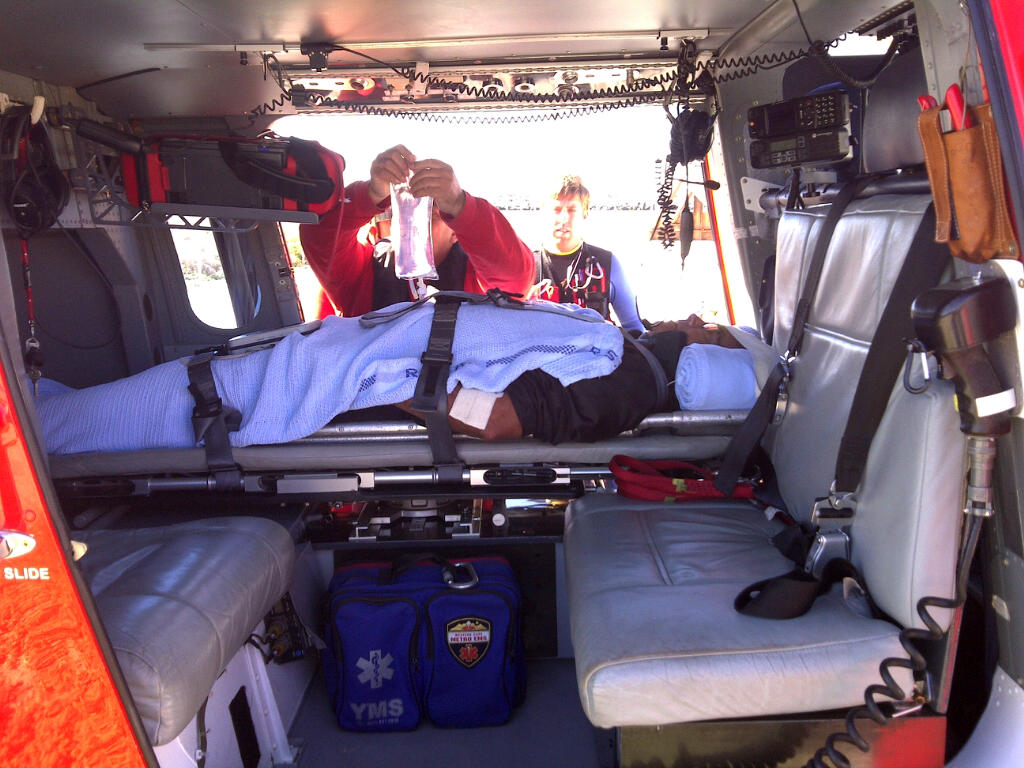 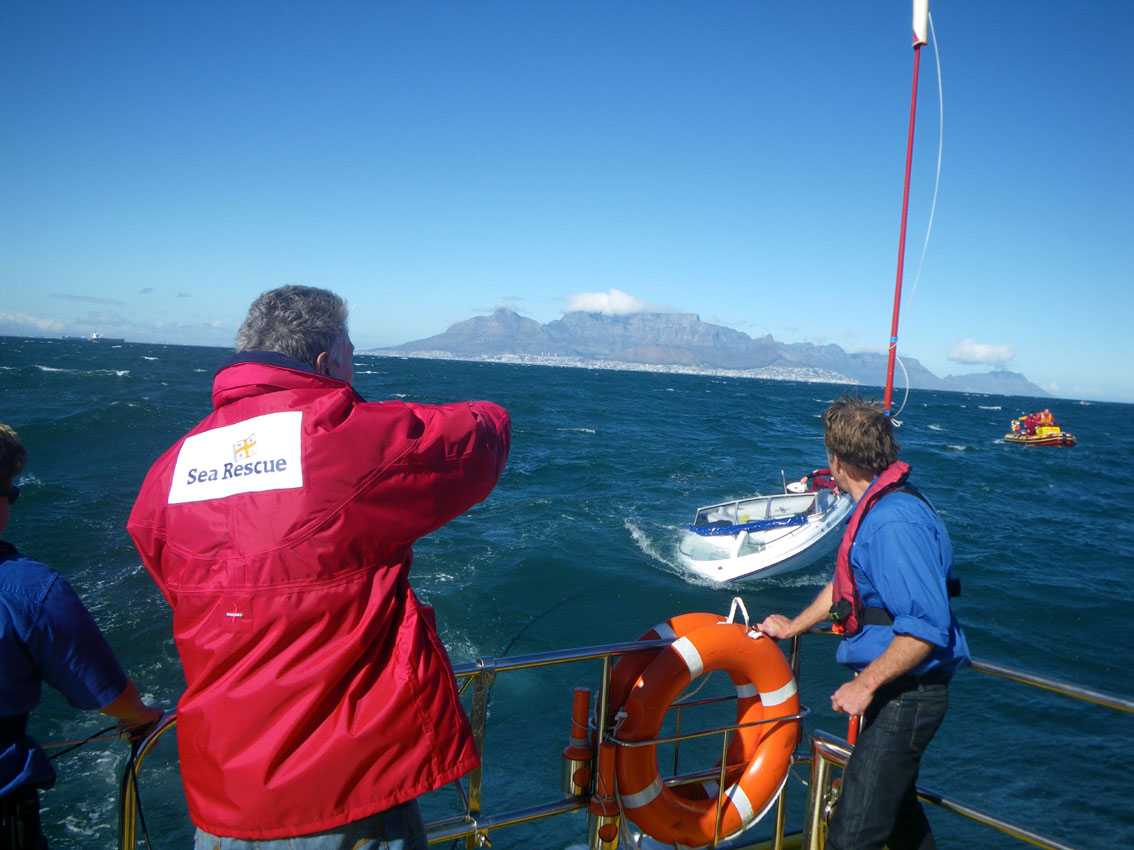