A 26 year old local man, a 26 year old Frenchman, from France, and a 20 year Frenchman, from Ecuador, sought help after getting into difficulty during a hike that started at Sandy Bay at 08h00. By around 16h00 they had reached a gulley, near to Duiker Island, and were unable to cross the gulley.

Running out of daylight and reluctant to turn around and hike back to Sandy Bay, which would have lasted well into the night, while also running low of drinking waster and with no warm clothing for the night they raised the alarm.

On arrival on the scene NSRI rescue swimmers were deployed to swim ashore. They reached the 3 casualties on the shore and in 2 relays they were transferred onto our sea rescue craft.

First 2 of the casualties were loaded onto the Croc, they were brought safely to the rescue craft Tintswalo Phoenix and then delivered further out to sea to board the rescue craft Albie Matthews. The third man was then transferred from the shore in the same sequence.

During the operation a dense fog descended around us causing visibility to reduced drastically in a short time frame.

They are commended for calling for help with daylight hours to spare.

They were brought to our NSRI Hout Bay sea rescue station aboard our sea rescue craft without incident and they required no further assistance. 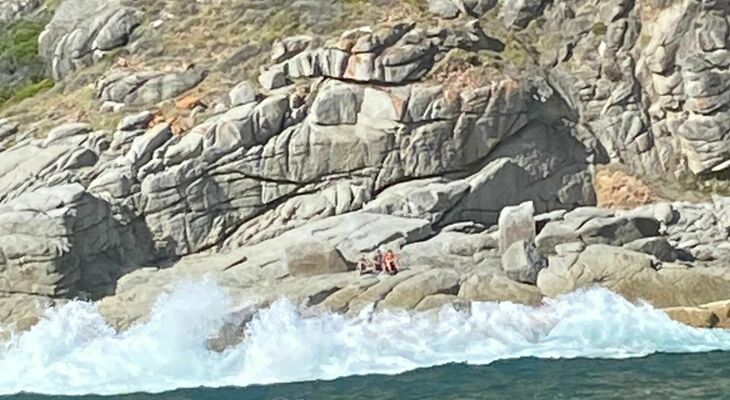