The NSRI welcomed the inauguration of World Drowning Prevention Day on 25 July as part of the United Nation’s resolution on drowning prevention.

According to the World Health Organization, nearly 360 000 people lose their lives due to drowning annually, and more than half of these deaths are among people aged 25 and younger. Drowning is the third leading cause of death in children aged five to 14 worldwide.

The UN Resolution recognises that ‘Drowning is a social equity issue that disproportionately affects children and adolescents in rural areas, with many countries reporting drowning as the leading cause of childhood mortality and drowning being among the 10 leading causes of death globally for 5-14-year-olds.’ It goes on to state that the world’s highest drowning rates occur in Africa, and the highest number of drowning deaths in Asia.

In South Africa, there are approximately 1 500 fatal drownings each year, about a third of which are children under the age of 14. The impact of lives lost on families and communities cannot be measured, neither can the effects of non-fatal drowning which may cause lifelong disabilities in victims.

NSRI’s Director of Drowning Prevention, Dr Jill Fortuin (PhD), welcomed the news: ‘A UN Global Drowning Prevention Resolution and an international day to focus the world’s attention on drowning will help to put the spotlight on these tragedies which are preventable. Importantly, it also commits the South African Government to take action to prevent drowning.’

To alleviate the impact of the burden of injuries and deaths associated with drowning, a number of preventative measures were advocated by the UN’s resolution, including:

• Introduction of water safety, swimming and first-aid lessons in schools.

The resolution stressed that drowning is preventable and encouraged all member nations to develop countrywide prevention programmes, and enact and enforce water safety laws.

Fortuin agrees, saying that ‘the old adage of “prevention is better than cure” couldn’t ring more true when it comes to drowning’. But, she adds, ‘With drowning, it’s often not possible to “cure” the damage done. Prevention is therefore a major focus area for the NSRI.’ 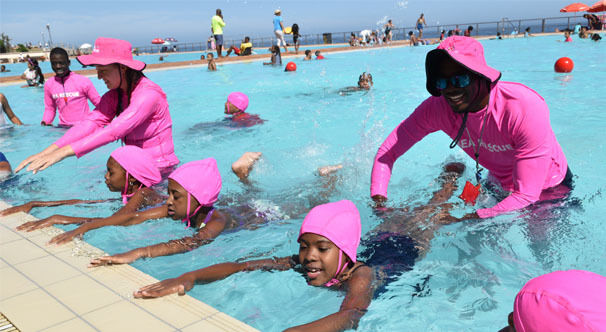 The NSRI has made a commitment to Drowning Prevention through its Water Safety Education programme. Established in 2006, the programme targets the most vulnerable members of the South African community: children. In this country drowning rates are highest among children under four years of age, followed by children aged five to 14 years. In the case of very young children, 70% of drowning deaths take place in or around the home in ponds, pools, bathtubs and buckets. Drowning is silent and can occur within 20 seconds.

Since its inception, the NSRI’s Drowning Prevention Department has engaged with communities and community leaders, schools, policymakers, municipalities and the public to share knowledge, collaborate, educate and gather and fund resources to address this critical public health issue that is largely underacknowledged and yet highly preventable.

As a result, a number of initiatives have been introduced targeting high-risk areas and communities across the country. These have taken the form of water-safety lessons in schools, pop-up survival swimming classes at public swimming pools, water-safety learning materials that are freely available, and the roll-out of Pink Rescue Buoys at public swimming areas like beaches and dams.

‘The NSRI is proud of the difference that we have made in helping to reduce the number of drownings in South Africa in the last 15 years. Since 2006, the NSRI has been teaching water safety in schools around the country. In total our 20 full-time water safety instructors have reached just over 3 million people (mostly primary school children) with our lessons on how to be safe in and near water as well as how to do bystander CPR,’ explains Fortuin

Following the World Health Organisation’s 2017 Report on Preventing Drowning, the NSRI launched their Pink Rescue Buoy campaign. To date the NSRI’s public rescue devices have been used to rescue 75 people with no harm to a rescuer and all rescues that were attempted were successful. Currently there are over 1000 Pink Rescue Buoys deployed around South Africa.

More recently the NSRI launched their Survival Swimming programme where their professional instructors and volunteer instructors give free lessons to children, teaching them how to control their breathing, orientate themselves in water, float and propel themselves at least five metres through the water.

NSRI continues to address this critical issue through innovative teaching, targeted campaigns and community participation. ‘Prevention is key when it comes to water safety, and the NSRI has the tools to help prevent these deaths but we need your help,’ Fortuin says.

You can help the NSRI to save lives by donating to their survival swimming programme or to their rescue services – you can see the various way to donate here: www.nsri.org.za/donate

Drowning is a leading cause of child mortality - with around 450 children drowning every year - deaths that could be prevented with something as simple as having a #DrowningPrevention policy in place in schools.

Sign our call to action to make a national Water Safety Education program for children an urgent priority.

Read about our activation on World Drowning Prevention Day as we celebrated 75 lives saved with our Pink Rescue Buoy initiative.