STORMS RIVER:Lodewyk van Rensburg, NSRI Oyster Bay station commander, said:At 13h55, Sunday, 30 May, NSRI Oyster Bay duty crew activated following a request for assistance from SANParks reporting a husband and his wife, from the Netherlands,injured after falling from a 4 meter cliff at the Storms River Waterfall Trail, approximately 1.4 kilometers from the starting point.NSRI Oyster Bay crew were already assisting SANParks at the Storms River Gorge, at a SAN Parks project, and we responded to the scene with oursea rescue craft Caltex Challenger 2.The EMS/AMS Skymed rescue helicopter was placed on alertSANParks rangers, WC Government Health EMS, Private Care ambulance services, NSRI Oyster Bay and NSRI Plettenberg Bay were activated.Following an assessment and further communications with SANParks rangers, because of adverse weather conditions that prevented access for NSRI rescue swimmers, the EMS/AMS Skymed rescue helicopter was activated by Metro Control.The sea rescue craft Caltex Challenger 2 was recovered and a land rescue party of SANParks rangers, NSRI Oyster Bay crew, NSRI Plettenberg Bay crew and Private Care paramedics, reached the casualties.Both were medically stabilised before being airlifted to a nearby landing one by the rescue helicopter.They were both transported to hospital by Private Care ambulance in stable conditions.Durban North Coast:Quentin Power, NSRI Ballito station commander, said:On Wednesday, 26 May, at approximately 13h00, 2 NSRI Ballito off duty crew members were attending a meeting in Durban, at North Beach, when they noticed a commotion in shallow surf on the beach front.On investigating they found a group of surfers assisting one of the surfers who had suffered an injury to his face.While riding a wave he had reportedly collided with his surfboard and one of the skegs had struck his face. The impact had caused the skeg to be separated from the board .While the surfers friends collected his personal belongings our NSRI crew members assisted to dress the wounds to stop the bleeding.The surfer was taken to a doctor in Umhlanga by his friends for further medical treatment.On Thursday morning, 27 May, at approximately 08h30, NSRI Ballito duty crew were activated following reports of a vessel capsized at Salmon Bay, Ballito, with a husband and wife onboard.Kwadakuza lifeguards and IPSS Medical Rescue were also activated.On arrival of the rescue crews it was established that the 2 casualty crew had been assisted to the beach by local surfers who happened to be on the water at the same time.They were assessed and treated for minor lacerations by the medics on the scene.The draining Spring Tide combined with the inshore sandbanks had made conditions challenging that may have contributed to the capsizing of their craft.The casualty craft washed onto the rocks and in a combined effort by rescue crews, community members and members of the Ballito Ski-boat Club, the casualty craft was righted and recovered onto its trailer without incident and no further assistance was required.The surfers who assisted on the scene are commended for their quick actions in assisting the 2 casualty crew to the shore.On Saturday morning, 29 May, at approximately 07h30, NSRI Ballito duty crew were activated for a craft, with 2 people on board offshore of Westbrook Beach, that was experiencing engine failure.The craft was in no immediate danger but as a precaution, due to prevailing conditions, the skipper dropped anchor and NSRI Ballito were activated while the skipper attempted to repair the motor.The sea rescue craft Freemasons Way was launched from Salmon Bay to assist the casualty craft.On arrival at the casualty craft, offshore of Westbrook, it was found that the skipper had completed additional fault finding checks and he had established that possible fuel contamination may have been responsible for the motor failure.The skipper flushed the fuel system and then switched over to spare fuel tanks that were onboard and he attempted to run the motors which then started without any further problems.It was decided that our sea rescue craft would accompany the casualty craft as she motored Southward, to ensure that the motors were running correctly. After running South for some time and with no further problems with the motors NSRI were released to return to base.It was later discovered that diesel may have contaminated the petrol fuel tanks and while this is not common NSRI urge boaters to always check when filling their fuel tanks at fuel stations that the correct fuel is poured.We commend the skipper of the vessel for his calm approach to the situation and for his trouble shooting to solve the problem.NSRI thank Salmon Bay Ski-boat Club for the use of there tractor during the launch of the sea rescue craft at Salmon Bay.On Sunday, 30 May, at approximately 07h40, NSRI Ballito duty crew were activated following reports of a Subantarctic Fur Seal appearing to be injured at Four Poles Beach, North of Salt Rock.On arrival on the scene an assessment of the seals condition and its locality was made and in conjunction with the Marine Animal Stranding Network and SAAMBR (The South African Association for Marine Biological Research), because of the large numbers of domestic animals being walked at that beach, the seal was captured by our NSRI Ballito team and taken to uShaka Marine World where a vet and a team from SAAMBR further assessed the animal.After a full assessment had been made at uShaka Marine World it was agreed that the animal be released to a secluded beach with less foot and domestic animal traffic where it could safely rest undisturbed.We thank all the community members that were walking their pets at Four Poles Beach for bearing with the rescue teams while that stretch of beach was temporary closed off for the capture of the animal. 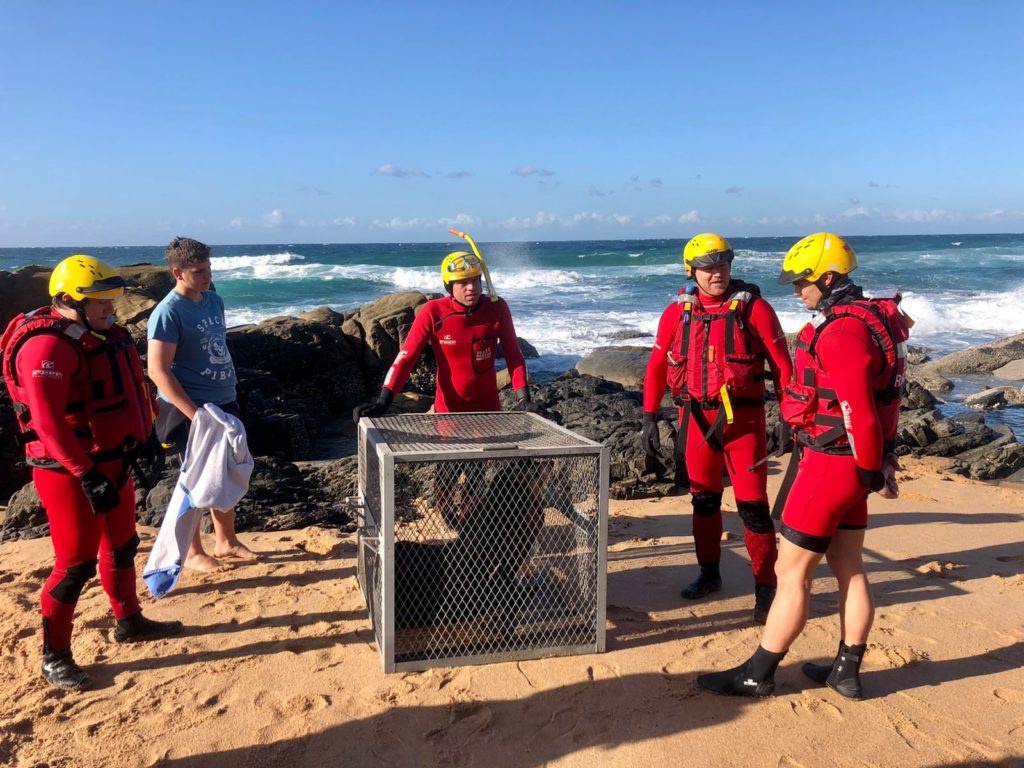