In the first of a series of stories on NSRI bases around the country, we chat to a few crew members at Station 2 (Bakoven) to find out more about the base and its family of volunteers.Since its establishment in 1967, Station 2 (Bakoven) has been involved in 849 operations. Talking about the early days of the station’s 54-year history, station commander Luke van Riet acknowledges that community is as important now as it was then. When the need for a rescue service for South African coastal waters became apparent in the late 1960s, the South African Inshore Rescue Service (SAIRS) was formed. As a fledgling organisation it relied heavily on local communities to work together to share skills and resources. Station 2 was no different, with the local residents of Bakoven coming together to face the challenges and “make the impossible happen”. “Station 2 was originally a shed on the beach,” Luke explains, “with a very antiquated launching system that took time and placed a lot of physical demands on the crew responding. The boats were small and needed to be manually carried up and down the beach in order to launch. As time went by, the base became more established and better infrastructure was installed.” After a storm in the early 2000s destroyed the base, it was rebuilt and the improvements that came with it meant a sturdier building and better launching facilities.Luke joined as an operational crew member 15 years ago, and this is his second year as station commander, “steering the metaphorical ship”, as he puts it, together with deputy station commander Dave Rosenberg who’s been on base for 17 years. Bakoven crew is 27 strong, with volunteers ranging in age from 24 to 55, and comprising trainees, shore crew, sea crew, coxswains and trainee coxswains.Tremendous gees and strong work ethicBoth Luke and Dave agree that there is an exceptional sense of community and family at the base. “We have a family-based station and we are all quite close knit. At our base, if anyone needs help or assistance, the whole station will lend a hand. The gees is remarkable,” Dave says. Regarding teamwork and callouts, Luke adds, “We all know what the common goal is and strive to achieve it. In order to make volunteering possible in this crazy time, it’s important that everyone plays their small part in the big picture of our station.”Mark Thompson, one of the station’s longest-serving members (he has 35 years of service under his belt) says camaraderie was a huge factor in his decision to join the station. “I was a student when I joined. I used to hang out at the beach quite a lot and knew quite a few of the volunteers at the station. I thought, why not combine beach culture with a bit of community service.” Many years down the line, he still believes in that camaraderie. “There’s nothing like launching a small boat into a wild sea at night, knowing that your success is reliant on your fellow crew – those moments form permanent strong bonds in the station.”Rescue off Robben IslandMark and Luke are reminded of one of their most memorable callouts – one involving negotiating that “wild sea at night”. “It was an epic rescue,” Mark says. The fishing trawler The Claremont ran aground off Robben Island and the call for assistance came in at midnight on 30 August 2013. “Getting to the casualty vessel was a difficult task in driving rain, 6-metre swells and zero visibility,” Mark recalls. “The vessel was in the surf line and we couldn’t gain access from the sea. So all the RIBS (rigid inflatable boats) were ‘parked’ in Murray Harbour, and we were taken by island security to the vessel to do the evacuation from land. Our crew, together with Stations 3 (Table Bay) and 18 (Melkbosstrand) crew swam out through the rocks and surf to the vessel and ferried casualties to shore along a line we had set up between the trawler and the land,” Mark continues. “We saved all 13 crew that night,” Luke says. 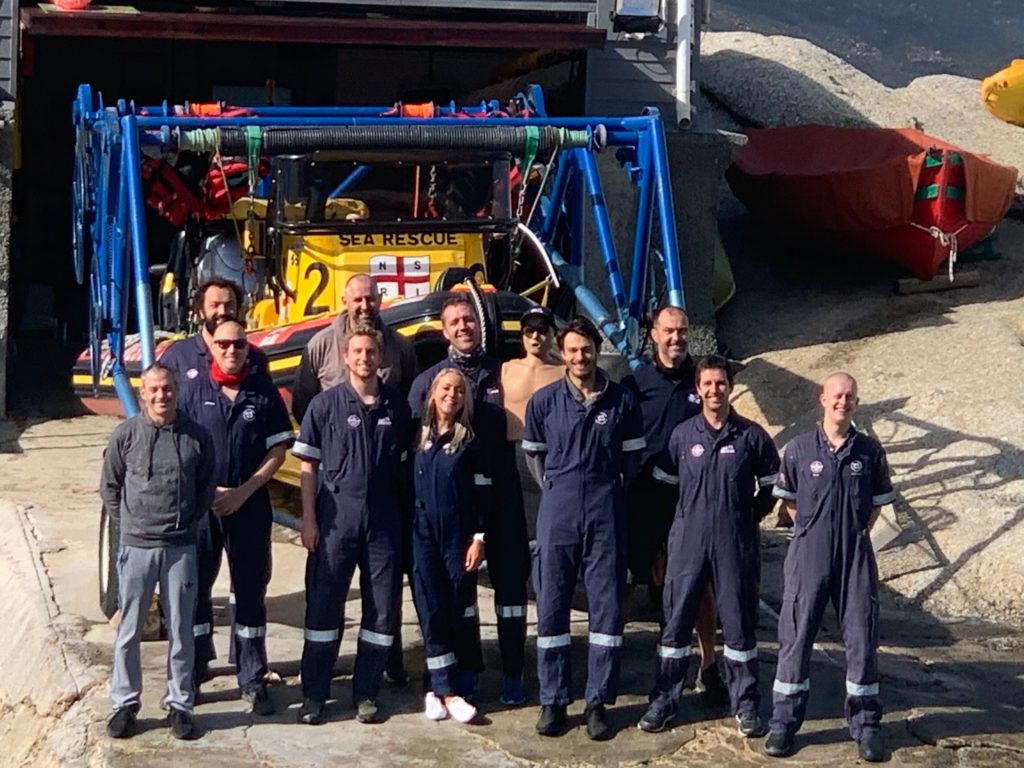 Strong leadership makes all the differenceFor crew member Jessica Shelver, all callouts are memorable, some more than others. “I remember every rescue, the lives we saved and especially the lives that we didn’t. But we learn the most from these and it ensures that we are ever ready to respond to the next rescue,” she says. Jessica grew up in Port Elizabeth and her love for the sea and for serving others first led her to join Nippers and then become a volunteer lifeguard. It seemed a natural progression to join Sea Rescue, where she could continue to use the skills she had learnt growing up. “Being part of something so extraordinary, and serving a cause greater than yourself is one of the most incredible feelings in the world. So is saving a life,” she shares.Jessica takes a moment to acknowledge her station commander, Luke. “Many mentors walk ahead of people showing them how they did it. Instead, Luke walks alongside us, spending hours showing us what we can do, what we can achieve, even if it means doing it over and over again, and even when there’s a warm lasagne waiting for him at home.”Of the station on little Bakoven Beach, she says: “Bakoven is incredible. There is a real sense of community and family among our crew. My husband was diagnosed with terminal brain cancer almost two years ago, and the crew really showed up for me and supported me in any way possible. Ironically, I joined Sea Rescue to save lives but, in reality, I think it saved mine.”Currently, Station 2 requires new spotlights for their rescue boat and contributions towards paving their parking area. If you are able to assist, please email station2@searescue.org.zahttps://www.nsri.org.za/2020/10/sea-kayakers-assisted-bakoven/https://www.nsri.org.za/2020/05/bakoven-sunday-17-may-man-missing/
Share

Rescued after a rocky ordeal