Rescued after a rocky ordeal

When a rogue wave swept an angler off rocks east of the Gwaing River Mouth in Wilderness, it took a concerted group effort to rescue him… the fading light proving to be the most challenging obstacle.Even though it took only 30 minutes from callout to successful rescue, for Station 23 (Wilderness) station commander Garth Dominy, time became suspended. “It’s true, you go into a hyper-focused state of mind, and all other thoughts disappear. Your training kicks in.”Prior to the rescue of the angler, the morale of the station crew had been low, as the previous 10 or so missions had involved deaths. Calls either came in too late or poor conditions hampered rescue efforts. But on 9 March 2021, a man’s life would be saved, and spectacularly so.The call came in just before 7pm on that Tuesday evening.Jan Oosthuizen, 59, from George, was angling from the rocks at a local’s fishing spot east of the Gwaing River Mouth when a wave swept over him, pitching him into the rolling surf where he was engulfed in breaking waves and strong currents. Light was fading fast and there was a rapidly closing window of opportunity before night would fall.With no cellphone coverage in that area, several bystanders had gone to find a signal so they could raise the alarm, while others had gone to fetch their vehicle to drive to where Jan was staying to alert his wife.A quick response“The first call the NSRI received from the Police Dive Unit only indicated that there was a person drowning in the vicinity of the Gwaing River Mouth,” Garth explains. “Crew immediately responded to the station to collect the Sea Rescue vehicle in order to get to the scene.”George Fire and Rescue Services, the SA Police Services and a Western Cape Government Health EMS rescue squad also responded. The Police Dive Unit, who had received the initial call from the Pacaltsdorp Police Station, remained on alert.“A few of our rescue crew responded to the garage at Herold’s Bay, which was recently donated to the station, to launch our 4.2m RHIB (rigid hull inflatable boat) Oscars Rescue,” Garth continues.As they approached the scene, the last of the light was fading fast but they noticed the flashing lights of the police patrol van and fire truck up on the hill, and used these to estimate how far they were from the shoreline. 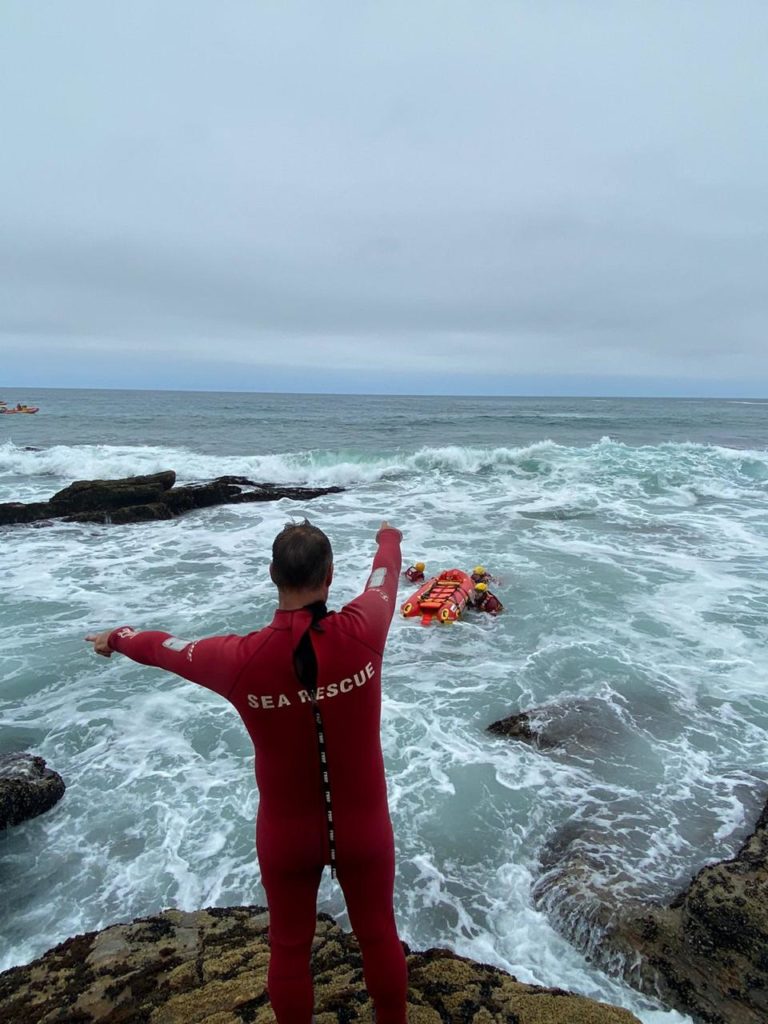 Navigating the rocky shoreline“We were mindful to negotiate the breaking swells and strong currents that make that particular area so dangerous to operate in, even when it’s light. We approached the breaking wave line a number of times before we caught the first glimpse of the casualty, thanks to all the torch lights that were shining onto him from the shore.“We timed the incoming swells and the breaking surf, eventually seeing a gap in the swells that gave us the opportunity we were looking for. Then we raced towards him. When we were close enough, we pulled him onboard and, without hesitation, headed straight out to sea, away from the danger zone.”EMS Metro Rescue and the EMS ambulance were waiting at Herold’s Bay. Jan was hypothermic but alert and safe. He was brought to shore, medically checked, and, although cold, he was not injured. His wife arrived and it was a warm reunion. 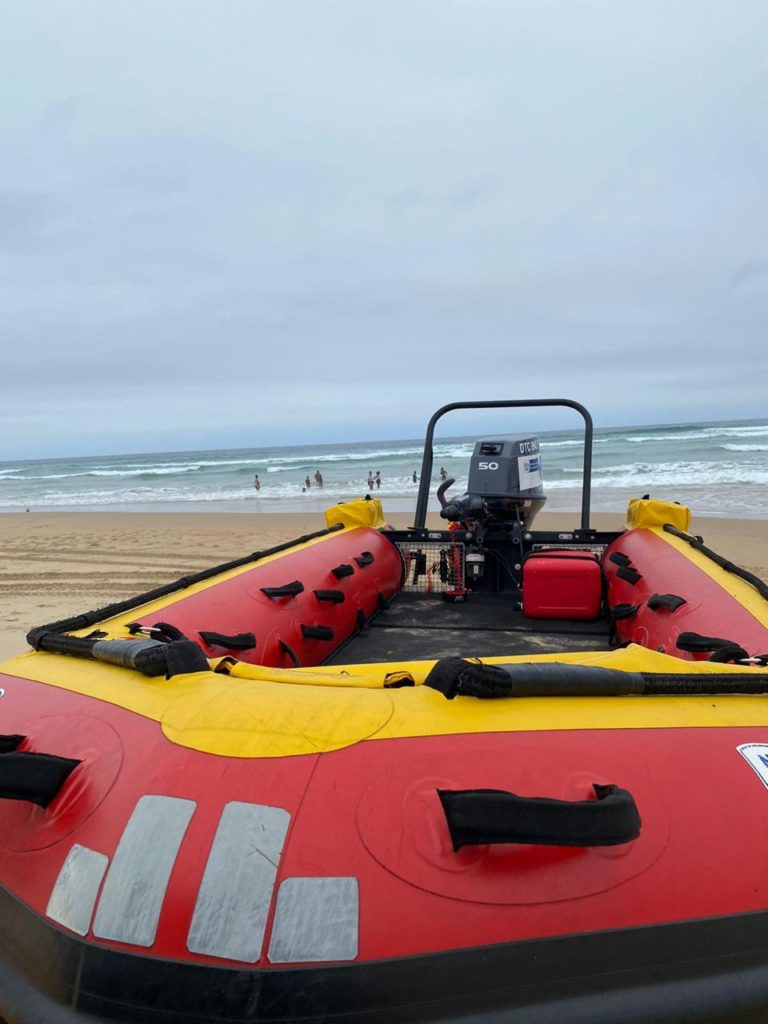 A real community effortThe NSRI commends everyone involved in the rescue, from the Police Dive Unit whose first thought was to call the NSRI to the community of Herold’s Bay that had donated the shed where Oscars Rescue is housed for easier launch in a tricky area. Bystanders and shore crew were shining torches onto the water, and encouraging Jan to try to swim away from the rocks. His fellow fisherman were calling out to him, telling him the NSRI was on its way and, while he was treading water, tied about six empty plastic bottles together and threw them to him for flotation.When crew spoke to Jan a day or so later he said he felt like he had run a marathon. But he was in high spirits and very grateful to all the rescue services that responded. He said he was particularly grateful to his fellow fishermen who had shone their torches on the water. And, of course, when the rescue vessel appeared out of the dark, he knew he was going to be safe.The NSRI urges all water users to be mindful around water. If you see anyone getting into trouble, never attempt a rescue yourself. If there is a flotation device on hand, please use this to assist the casualty, and then call for help immediately. https://www.nsri.org.za/2020/09/wilderness-wednesday-23-september-patient-assisted-and-man-caught-in-rip-currents-assisted-victoria-bay/https://www.nsri.org.za/2020/01/non-fatal-drowning-wilderness/https://www.nsri.org.za/2019/11/sea-rescue-wilderness-sunday-24-november-paraglider-accident/
Share