SEA RESCUE – NSRI – STATION 11, Port Alfred. STATION 7, East London. STATION 6, Port Elizabeth. STATION 17, Hermanus. STATION 16, Strandfontein. STATION 4, Mykonos. NSRI Lifesaving. STATION 25, Hartbeespoort Dam. STATION 9, Gordons BayPORT ALFRED:Steven Slade, NSRI Port Alfred station commander, said:At 13h55, Wednesday, 01 January, NSRI Port Alfred, EC Government Health EMS, and Gardmed ambulance services attended to a 10-year-old girl, from Peddie, for non-fatal drowning symptoms at Kleinemond East River after the paddleboard she was on with her dad capsized.Bystanders had initiated chest compressions on the girl and their efforts were joined by former NSRI Port Alfred crewmen and then by an NSRI Port Alfred trainee crewman who assisted before NSRI Port Alfred duty crew and paramedics arrived.The girl was transported by EMS ambulance to hospital in a serious but stable condition.NSRI commend the actions of the public members and former NSRI crew members who assisted.EAST LONDON:Geoff McGregor, NSRI East London station commander, said:NSRI East London were notified on Wednesday, 01 January, in the morning, of a 3-year-old child rescued by BCMM (Buffalo City Metropolitan Municipal) Gonubie Lifesaving lifeguards at the Gonubie River Mouth.The child was airlifted to hospital by an EC Government Health EMS helicopter in a serious but stable condition.PORT ELIZABETH:On 01 January, during the morning, NSRI Port Elizabeth were notified that EC Government Health EMS, Gardmed ambulance services and NMB (Nelson Mandela Bay) Sardinia Bay Lifesaving lifeguards, assisted by the SA Police Services, NMB Beach office and a Police Dive Unit, attended to a 51-year-old woman suffering non-fatal drowning symptoms at Sardinia Bay and she was airlifted to hospital aboard the EMS Aero Med 3 helicopter in a serious but stable condition.GANSBAAI:Deon Langenhoven, NSRI Hermanus station commander, said:On 01 January, NSRI Hermanus were activated to reports of a drowning incident near to Gansbaai.Prior to arriving on the scene, WC Government Health EMS paramedics confirmed that a 10-year-old boy suffered a fatal drowning.The SA Police Services and Government Health Forensic Pathology Services attended at the scene.STRANDFONTEIN:At 15h00, Wednesday, 01 January, While NSRI Strandfontein duty crew were on duty at the NSRI rescue base, a pregnant lady arrived at the NSRI Strandfontein sea rescue base reporting contractions.NSRI Strandfontein duty crew sprang into action and NSRI Strandfontein medics, including NSRI's Tammy Pasensie, who is an ECP paramedic student and currently qualified as a Basic Ambulance Assistant, and NSRI's Lakin Seconds, a 4th-year medical student, who is the daughter of NSRI Strandfontein station commander Vaughn Seconds, assisted in the delivery of a healthy baby boy who was born at 15h40 inside the NSRI Strandfontein sea rescue base.Netcare 911 ambulance services and WC Government Health EMS responded and Disaster Risk Management volunteer officers, who were on stand-by at Strandfontein Beach, also came to the station to assist after the baby was born.The mom and child were transported to hospital by Netcare 911 ambulance and both are reportedly doing well.While this was going on a woman was treated at the base for a dislocated knee and she has been transported to hospital by EMS ambulance. 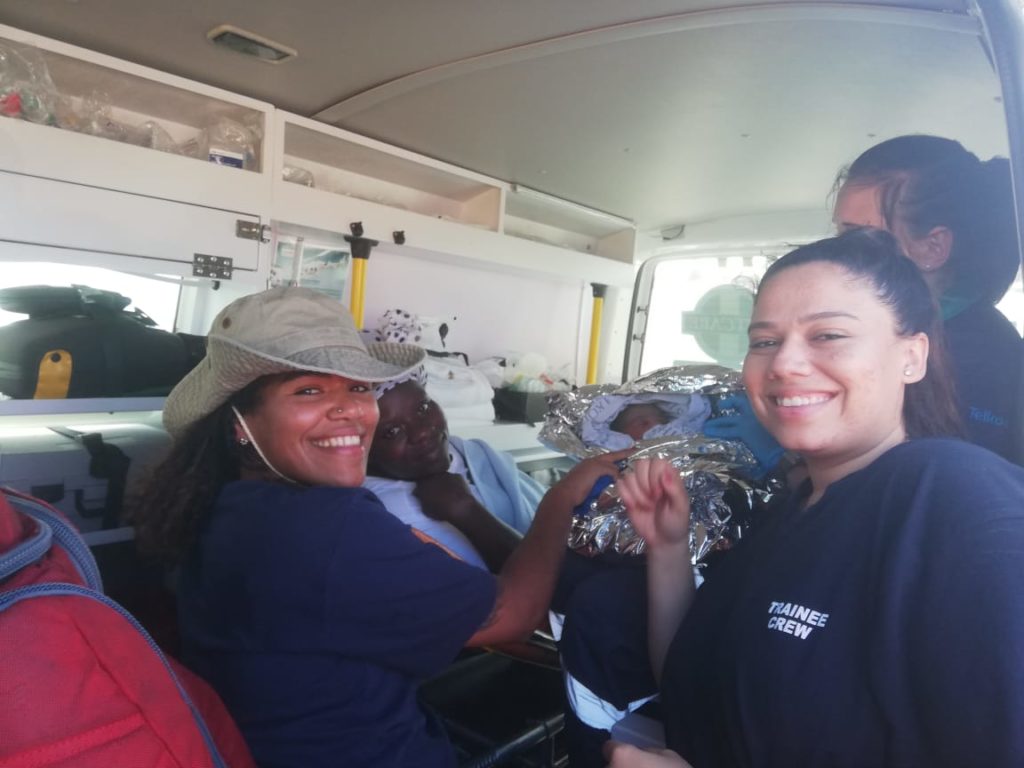 The baby boy born at NSRI Strandfontein rescue base on 01 January and his Mom, Mollieny Mushayi, 27, from Zimbabwe. Here pictured In the Netcare 911 ambulance that took them to hospital. In the picture mom and baby are flanked by NSRI’s Tammy Pasensie, an ECP (Emergency Care Practitioner) paramedic student (with the hat on) (picture left) and NSRI’s Lakin Seconds (picture right). Lakin is a 4th year medical student and the daughter of NSRI Strandfontein station commander Vaughn Seconds. Lakin and Tammy assisted in the delivery of the baby at the NSRI Strandfontein sea rescue base and they were helped by the NSRI Strandfontein duty crew. In picture, but obscured from view, is Netcare 911 Advanced ECP (Emergency Care Practioner) Yolande Myburgh. Mom and her son remain in hospital as a precaution but are reported to be doing well. The baby boy remains unnamed.WEST COAST:Mike Shaw, NSRI Mykonos station commander, said:On 01 January, NSRI Mykonos rescued a windsurfer on Langebaan Lagoon after his sail tore.A boat capsized at St Helena Bay and prior to NSRI Mykonos launching Sea Rescue craft, we were informed all persons were safely ashore.Telkom Maritime Radio Services broadcast an all ships alert on VHF Marine navigational hazard warning for the capsized which was not recoveredLater, our Sea Rescue craft Jacqueline, while on patrol on Langebaan Lagoon to check that everyone was safe, we found a kayak in difficulty and took the kayak under tow to the Langebaan beach where no further assistance was required.STRANDFONTEIN – WEST COAST:Stewart Seini, NSRI lifeguard coordinator, said:At 16h48, 01 January, at Strandfontein on the West Coast, the watchtower lifeguard crew member noticed what looked like the top of a head bobbing in the water to the far right of the beach and caught in a rip current, but against the suns glare the tower watchman was not able to fully make out what it was in the water.As a precaution, a rescue was declared and rescue swimmers launched into the surf with a Malibu rescue board and rescue torpedo buoys.A rescue swimmer reached a man floating in the water and he was completely still and silent with his head back and his body was vertical in the water and he appeared to be at the point of submerging underwater.The adult man was rescued onto the Malibu rescue board and brought safely back to shore and he has expressed his gratitude to his rescuers admitting that in a short space of time he felt he was going to drown and surprised at how quickly the lifeguards reached him.After being medically assessed it was determined that he had no injuries or swallowed water, but was tired and cold, and was left in the care of family.HARTBEESPOORT DAM:Arthur Crewe, NSRI Hartbeespoort Dam station commander, said:At 00h19, 01 January, we launched our rescue craft after multiple red distress flares were sighted on the dam.While patrolling we found a boat with motor failure and although the crew of the casualty boat had not set off red distress flares we towed them to shore.At 20h48 we launched our sea rescue craft to assist a boat trapped in Hyacinth near to Pecanwood with 3 men onboard.In a storm and heavy rainfall, we released their boat from the entrapment and towed them to Pecanwood.On 02 January, after heavy storms, we responded to assist boats that had dragged anchor in strong winds on the dam and we searched for additional boats that were missing but no persons were involved.STRAND:Alan Meiklejohn, NSRI Gordon's Bay station commander, said:On 01 January, at 17h04, NSRI Gordon's Bay were alerted to a 25-year-old woman suffering non-fatal drowning symptoms at Strand Beach and she was in the care of lifeguards and GB Med Sec ambulance services paramedics and she was in a critical condition.The lady was transported to the hospital by GB Med Sec ambulance.TO REPORT A SEA RESCUE EMERGENCY DIAL 112 FROM A CELLPHONE
Share