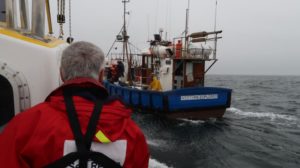 Spirit of Safmarine III beside the fishing trawler.Darren Zimmerman, NSRI Simon's town station commander, said:At 08h06, Tuesday, 12th March, NSRI Simon's town duty crew were activated by the Transnet National Ports Authority (TNPA) following a request for medical assistance from a fishing trawler 16 nautical miles South of Cape Point.MRCC (Maritime Rescue Coordination Centre) had arranged for a Government Health EMS duty doctor to evaluate the patient condition and it was suspected that the patient may be suffering a stroke (CVA - Cerbrovascular Accident).Communications were assisted by Telkom Maritime Radio Services.The sea rescue craft Spirit of Safmarine III was launched accompanied by a Cape Medical Response (CMR) rescue paramedic team and an SA Air Force (SAAF) 22 Squadron Oryx helicopter was tasked accompanied by NSRI ASR (Airborne Sea Rescue) rescue simmers and WC Government Health EMS rescue paramedics.On arrival on the scene NSRI rescue swimmers were transferred from the sea rescue craft Spirit of Safmarine III onto the fishing trawler and the patient, in a stable and satisfactory condition, was transferred onto the sea rescue craft and in the care of the CMR rescue paramedics it was determined that the patient was stable enough to remain on the sea rescue craft and not required to be airlifted into the Air Force helicopter that had also arrived on the scene. 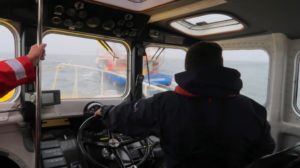 Inside Spirit of Safmarine III.The patient, a 34 year old fisherman, was brought to the NSRI Simon's town sea rescue station and he has been transported to hospital by CMR ambulance in a stable condition for further care.
Share