At 08h30 on Wednesday the 30th of August, NSRI Witsand Port Beaufort duty crew were activated to assist SAMSA (South African Maritime Safety Authority) who were investigating reports of a suspected chemical fluid spillage between the Breede River Mouth and Takheining (a well known fishing area).

At 07h23 on Thursday the 31st of August, NSRI Plettenberg Bay medical crew were activated following reports of a young man collapsed from unknown causes at home at a residence between Plettenberg Bay and Knysna.

Our NSRI medics responded to the residence while Med-Life ambulance services were activated.

On arrival on the scene a 20 year old male was treated for chest pains and breathing difficulties by our NSRI medics and he was taken into the care of paramedics on their arrival and was transported to hospital by ambulance in a stable condition.

It was later confirmed that the local man was recovering well and suffering from a pinched nerve and is expected to recover fully.

MRCC (Maritime Rescue Coordination Centre) arranged for the WC Government Health EMS duty doctor to speak to the Captain of the fishing trawler by radio phone in order to medically assess the patient and communications were assisted by Telkom Maritime Radio Services.

The EMS duty doctor deemed it necessary for the patient to be evacuated to hospital as soon as possible and the NSRI Table Bay duty crew were activated by TNPA (Transnet National Ports Authority) at 06h55.

Telkom Maritime Radio Services instructed the fishing vessel Ellis-S to begin a heading towards the Port of Table Bay.

The NSRI Table Bay sea rescue Spirit of Day, with coxswain Davide Del Fante and crew Gal Chiles and Ewald Bonzet (Gal and Ewald are also Community Medics dispatchers), was sent ahead as a first response.

On the sea rescue craft Spirit of Day’s arrival on the scene, approximately 30 nautical miles North West of the Port of Table Bay, the two NSRI crew, Gal Chiles and Ewald Bonzet, were transferred from the sea rescue craft onto the trawler and commenced medical treatment to the patient who was found to be showing signs and symptoms of a heart attack (Myocardial Infarction).

On the arrival on the scene of the sea rescue craft Spirit of Vodacom two of the EMS rescue paramedics, Antoinette Burrows and Anina Balie, were transferred onto the fishing vessel and they continued with medical treatment.

The operation was completed at 10h30.

PICTURE ATTACHED: By NSRI Table Bay – The patient being hoisted from the fishing vessel Ellis-S into the SAAF 22 Squadron Oryx helicopter while the 2 NSRI Table Bay sea rescue craft stand by on the scene. 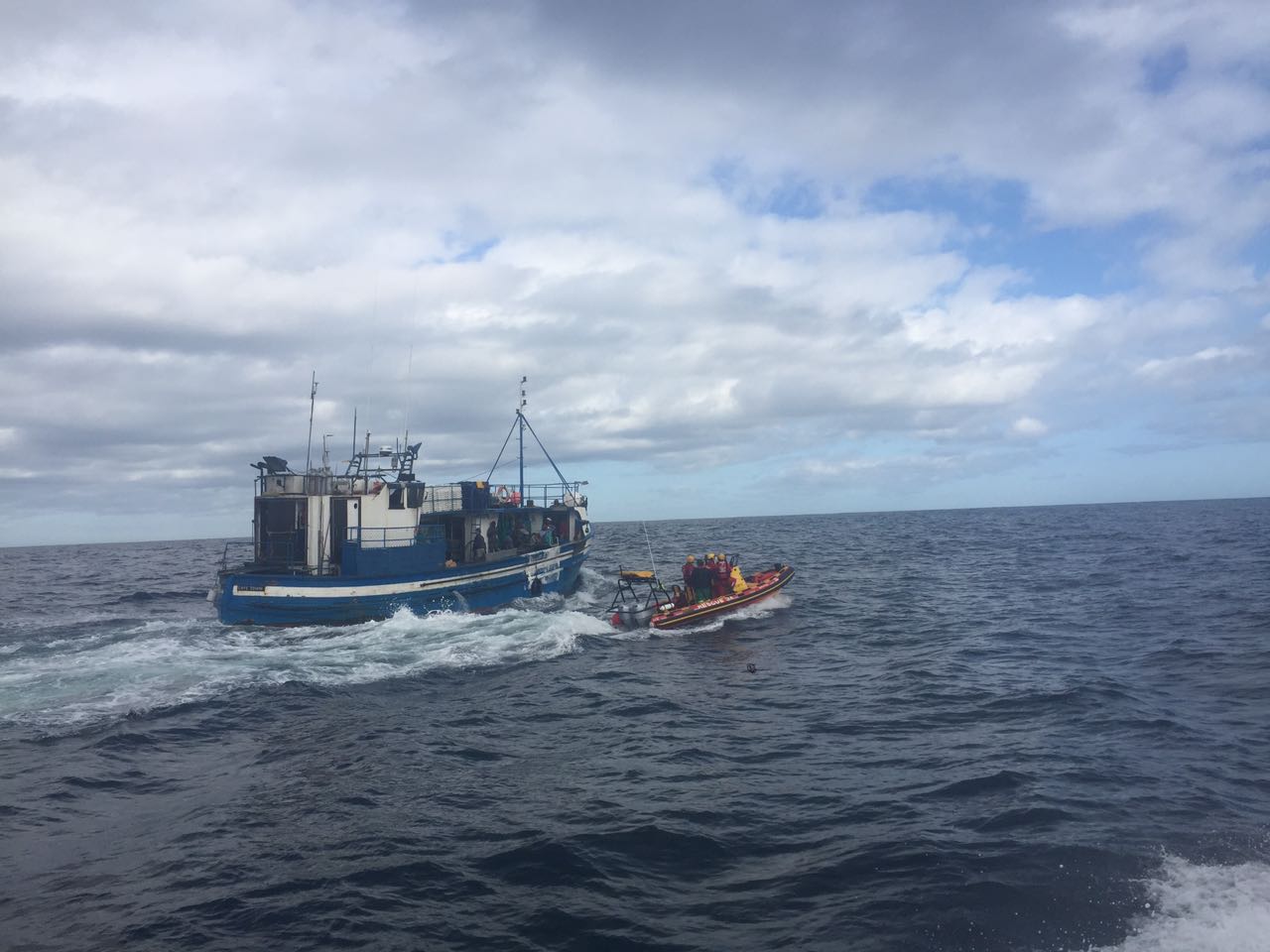