While preparing to launch sea rescue craft NSRI were informed that Clifton Surf lifeguards had rescued all of the people from the surf, assisted by members of the public, and Community Medics were in attendance assisting the lifeguards treating multiple patients for non-fatal drowning symptoms.

ER24 ambulances and WC Government Health EMS ambulances transported two men to hospital in serious but stable conditions for further treatment and the remainder of the patients were released following medical treatment and requiring no further assistance.

It appears that after the high tide peaked and started to drop towards low tide strong rip currents formed at Second Beach and a group of four bathers had been swept out to sea and they had been rescued without incident by Clifton Surf lifeguards.

Shortly after that incident at least eight people were then swept out to sea and the two duty lifeguards called for back up while launching into the surf to chase after the eight people.

Jason Lemmer (a long distance swimmer) and Juan Swanepoel (a surfer and Ernesta’s brother), who happened to be on the beach at the time, also went into the water to assist the lifeguards while additional lifeguards, with Malibu Rescue Boards, had launched to assist.

The Clifton Surf Lifesaving rescue rubber duck had been diverted from a patrol at Camps Bay Beach to respond to assist.

Juan had asked a young girl on the beach if he could borrow her body board and he launched into the surf and reached two people about 100 meters off-shore and passed them the body board instructing them to use the body board to stay afloat.

At that stage the additional lifeguards had reached the remaining people in the water and they were all brought safely back to the beach.

Clifton Surf Lifesaving lifeguards, Juan Swanepoel and the unidentified man are commended for their quick actions.

On returning to the beach Juan gave the young girl her body board and thanked her.

Then during routine patrols along the Camps Bay beachfront NSRI Bakoven assisted lifeguards in two incidents where swimmers were swept out to sea by strong rip currents.

In the one incident Camps Bay Beach lifeguards could be seen running along the beach and following their direction NSRI Bakoven crew aboard the sea rescue craft Rotarian Schipper noticed a man in difficulty in the surf and responded in that direction and deploying me into the water an adult man was assisted. Lifeguards, who had swum out to assist, took the man back to the beach assisted by the NSRI Bakoven rescue swimmer.

A similar incident occurred later and an adult man, assisted by NSRI Bakoven and Camps Bay Beach lifeguards was saved from drowning after being swept out to sea by rip currents.

The Camps Bay Beach lifeguards are commended for their swift action.

CMR paramedics continued with Advanced Life Support medical treatment on the 54 year old man from Bonteheuvel.  The man was stabilised on the scene and transported to hospital in a stable condition by ambulance.

Fish Hoek Surf Lifesaving lifeguards are commended for their quick action administering medical treatment to the man and calling for back-up.

The man suffering multiple lacerations and arterial bleeding was stabilised before being transported to hospital by ambulance and Police are investigating the incident.

Deon Langenhoven, NSRI Hermanus station commander, said: NSRI Hermanus duty crew, assisted by the SA Police Services and Overberg Fire and Rescue Services, launched a search at 22h35 Monday, 26th December, following reports from a lady reporting her son and her husband, who had gone fishing along the shoreline earlier in the day but after not checking in since 14h00 she feared for their safety.

An extensive search along the shoreline and investigating camping sites yielded no results but later they were discovered at Struisbaai, safe and camping, and no further assistance was required.

Wesley Barnes, NSRI Melkbosstrand duty coxswain, said: At approximately 16h17, Monday, 26th December, a 21 year old man from Vredenburg, caught in a rip current was assisted after he appeared to fall from rocks into the water before being swept out to sea by rip currents.

The incident was witnessed by our rescue crew aboard the sea rescue craft Spirit of Brenda who were on patrol in the vicinity of Slabbert se Klippe where the incident occurred.

He was rescued onto the sea rescue craft and brought to shore where he was treated by NSRI Melkbosstrand medics for injuries to his left leg.

Members of The City of Cape Town Disaster Risk Management were also in attendance.

He was treated on the scene and advised to see his doctor and he required no further assistance.

At around 07h30, Tuesday, 27th December, NSRI Melkbosstrand duty crew dispatched sea rescue craft to assist where a 23 year old female from Durbanville had been thrown from her horse while on a beach ride and reportedly riding in the surf-line.

The horse was reportedly still in the sea and handlers were struggling to corral the horse while medical attention was needed for the female rider.

On arrival on the scene handlers had managed to calm the horse that was safely being loaded into a horse box and NSRI medics attended to the female on the beach suffering from a knee injury and she was transported to hospital by ambulance and she is recovering.

At 18h26, Tuesday, 27th December, a 22 year old local man was brought to NSRI Melkbosstrand station after he had reportedly fallen out of a tree while trying to retrieve his beach ball but falling and fracturing his ankle.

An ambulance was arranged while NSRI medics stabilised the man and he was transported to hospital in a stable condition by WC Government Health EMS ambulance. 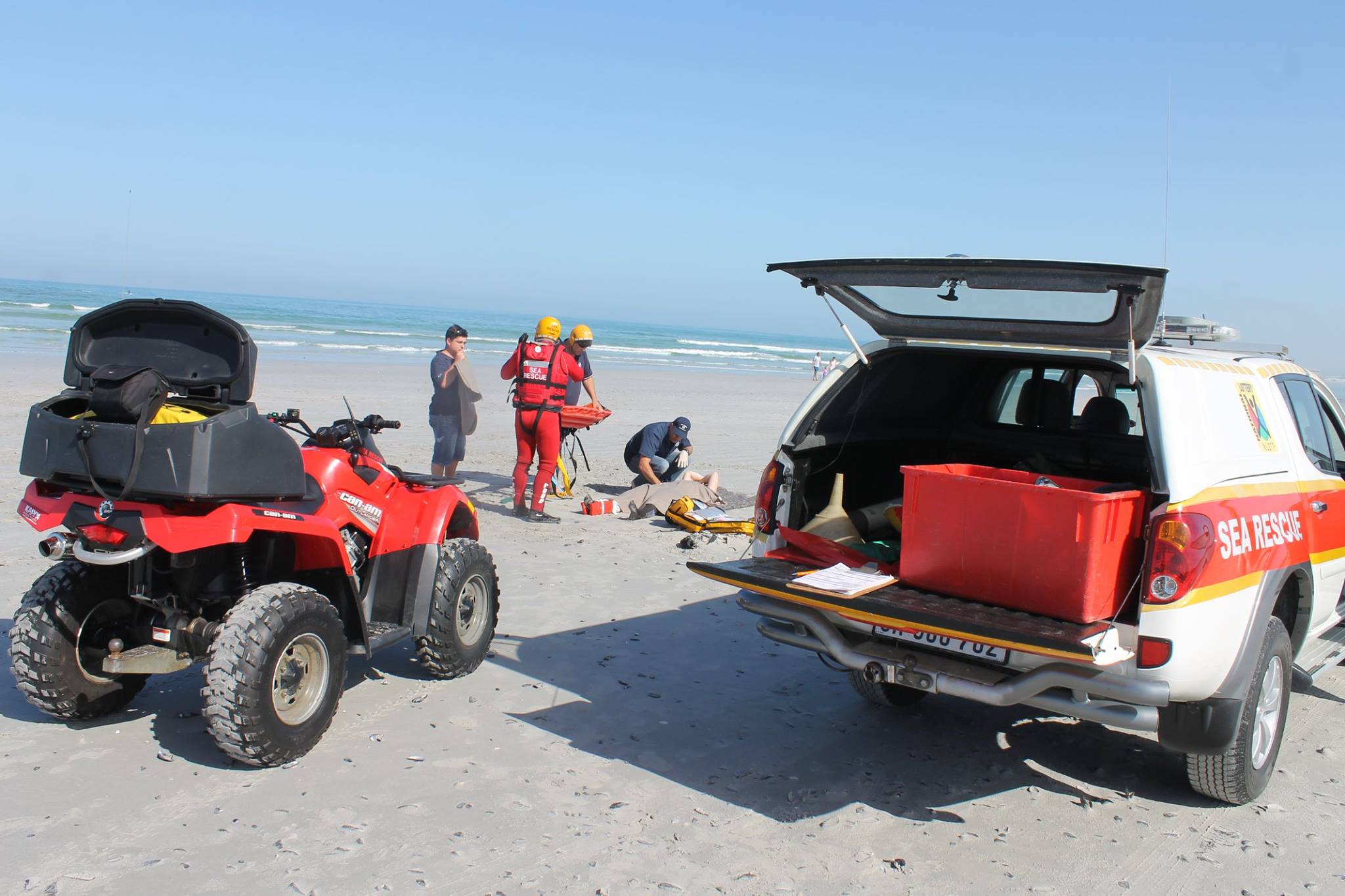 The man was treated by paramedics but he did not require to go to hospital.

Then at 19h45 a search at Eastern Beach for an unidentified man who had reportedly gone missing in the surf has yielded no result and a Police K-9 Search and Rescue unit and a Police dive unit will continue with a search.

NSRI East London had responded to the scene along with Netcare 911 ambulance services, the SA Police Services and a Police K-9 Search and Rescue team.

A Police officer, Constable Luthando Mdingi, who was off duty and on the beach for the day, saw the man being swept out to sea and swam out to sea to try to rescue the man but in the dark he lost sight of the man and a search by rescue resources revealed no sign of the man.

Police have opened an investigation and a search is continuing.

The missing man was identified by Police as a 22 year old man from Alice.

Constable Mdingi is commended for his efforts in trying to save the man.

On investigation it was found that the paraglider had landed safely amongst The Dunes and he required no further assistance.

Then at 17h50 NSRI activated to assist SA National Park rangers and family searching for a 12 year old girl missing while cycling in the Harkeville forest.  Before arriving on the scene the child was found safe and no further assistance was required.

Jerome Simonis, NSRI Knysna station commander, said: Since Tuesday, 27th December, Municipal Authorities have closed beaches in the Southern Cape between Maoli Beach, Sedgefield, and Brenton-on-Sea due to the high number of sharks spotted in the vicinity of beaches along this stretch of coastline.

Municipal Authorities will reportedly use a helicopter today, Wednesday, 28th December, to monitor the coastline before they decide on a further course of action.  NSRI urge the public to heed the Municipal Authorities decision which was made in the interests of public safety.

Media and the public are urged to follow official notifications regarding this situation posted by Municipal Authorities and cooperation is deeply appreciated.

The 10 crew were transferred onto the sea rescue craft Spirit of Dawn and brought to shore in relays.

At the same time 2 females suffering motion sickness on the boat Sea Freaks were transferred onto the sea rescue craft Spirit of Dawn and brought safely ashore after asking to be assisted while NSRI were busy with the boat Lucky Sands.