NSRI medics rendered medical care to a critically injured man, believed to be aged approximately 30, who had crashed his motorbike on the roadway. It appears that no other vehicle or persons were involved in the accident.

An ambulance was summoned and the man was transported to hospital in a critical condition by ambulance.

Police are investigating the accident.

On arrival on-scene NSRI recovered a man who had been rescued out of the water onto a surfboard by a surfer and 2 men were rescued off the upturned hull of the boat by NSRI. All 3 men, aged 17, 29 and 52, from Somerset West, were brought to shore. The 17 year old was transported to hospital by a CMR (Cape Medical Response) ambulance suffering exhaustion and hypothermia but in a stable condition and he is expected to make a full recovery.

Their boat was righted and recovered by NSRI Kommetjie.

A short while later NSRI Kommetjie sea rescue craft SPIRIT OF WINELANDS and the Police Sea Borderline boat responded again to Long Beach, Kommetjie, where another rubber-duck capsized with 4 men onboard.

All 4 men, known only to be Capetonians, were rescued by the Police Sea Borderline and they were brought to shore uninjured.

On arrival on-scene, 2 nautical miles off-shore, 3 adult men from Brackenfell were found on their boat which had sustained motor failure while the men were fishing.

They had raised the alarm by firing the 3 red distress flares.

They were towed to the harbour where they required no further assistance.

Early this morning, NSRI Hermanus were informed that lifeguards at Voelklip beach had assisted a small dolphin found stranded on the beach. The lifeguards had swum the dolphin out to sea with the aid of rip-currents and released the dolphin hoping it would survive.

Later, at 14h00, NSRI Hermanus were activated to respond to Grotto Beach where bystanders had found a small dolphin beached.

Believing this to be the same dolphin NSRI Hermanus volunteer duty crew responded to assist. They found the dolphin in a weak state, loaded it onto the sea rescue vehicle and transported it to the old harbour White Shark Conservancy in an attempt to seek assistance for it. Sadly, during transportation, the dolphin died. It’s carcass has been taken to the New Harbour and will be collected by the Department of Environment – Oceans and Coasts. 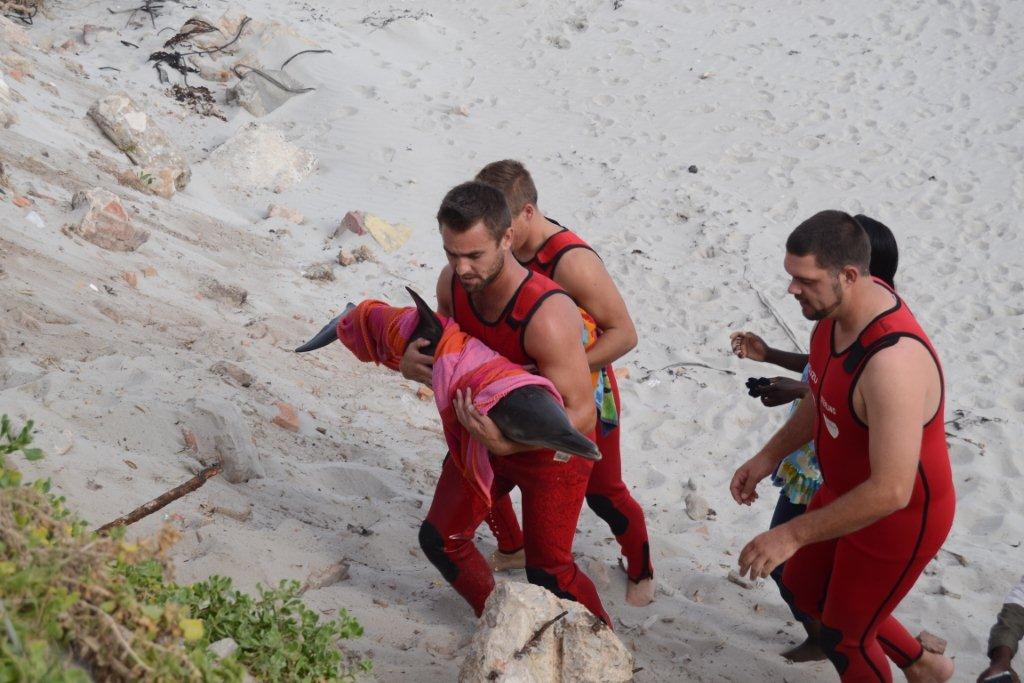 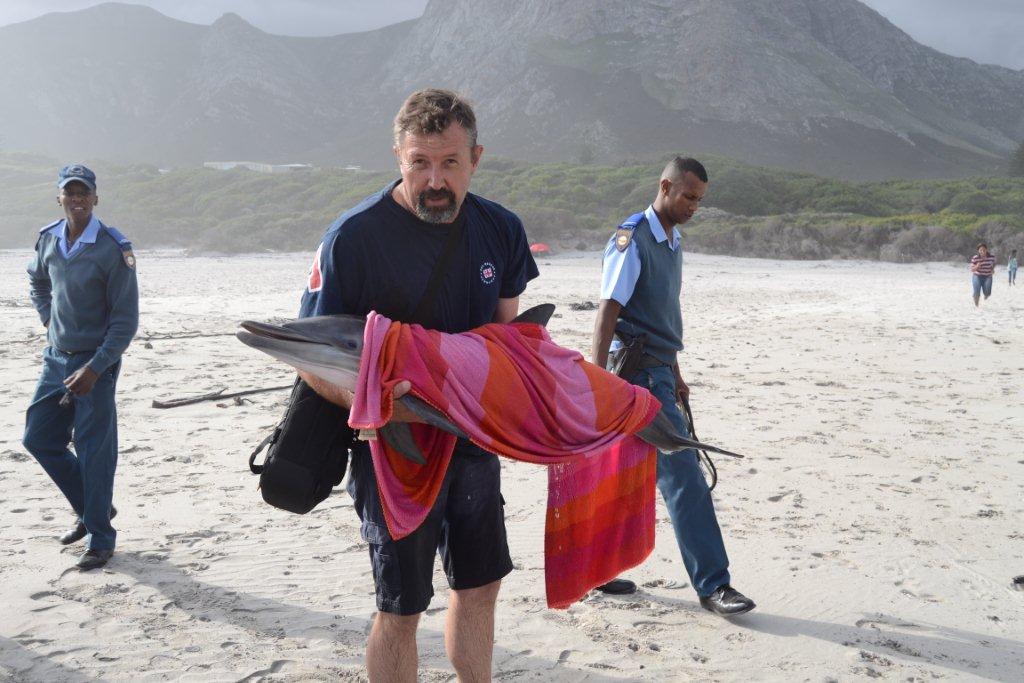 Later, at approximately 15h00, NSRI Hermanus were activated to respond to assist 5 people, 3 adult men, a teenage boy and a teenage girl, on a 7 meter rubber-duck, off Skulphoek, Hermanus, after their boat had sustained motor failure.

NSRI Hermanus towed the boat to the New Harbour, where once safely ashore, they required no further assistance.