At just after 09h00 on Friday the 25th of April, NSRI Port Edward volunteer sea rescue duty crew were activated following reports of a man fallen overboard a fishing ski-boat in the surf line at Silver Beach, Port Edward.

It appears that the 55 year old man, from Van Der Bijl Park, Johannesburg, had fallen overboard after the fishing ski-boat GRR GRR appeared to have side swiped a wave during the early stages of a Marlin Ski-Boat Club fishing competition that started today.

While NSRI Port Edward volunteer sea rescue duty crew responded to the scene eye-witnesses confirmed that the man was still in the surf line and uBunthu lifeguards were entering the water to go to the man’s assistance.

The boat GRR GRR appears to have continued on out to sea while uBunthu lifeguards, on duty at Silver Beach at the time, had dispatched 2 lifeguards into the surf and they rescued that man and brought him safely ashore.

On the NSRI’s arrival on-scene the uBunthu lifeguards had the man on the beach already. The man, suffering a fractured left Tibia, was treated by NSRI medics and brought to the NSRI Port Edward sea rescue station medical room where he received further medical treatment before a Netcare 911 ambulance arrived on-scene and the man has been transported to hospital in a stable condition. 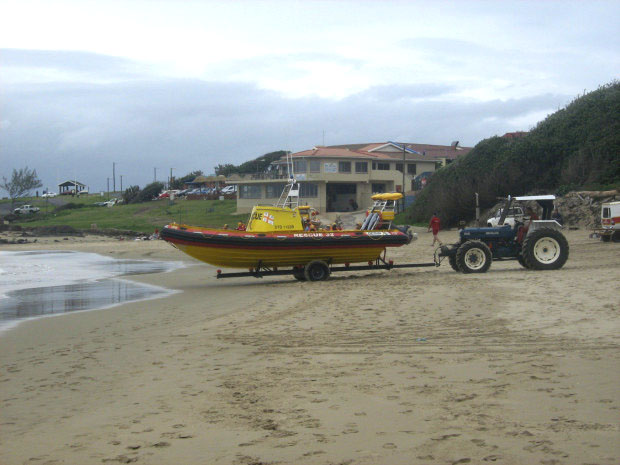