Both men were then in difficulty in the water and members of the public, attempting to raise the alarm, flagged down a passing WC Government Health EMS ambulance that happened to be driving past at the time.

The EMS ambulance men, Benwin Greeff and Goolam Mowzer, immediately stopped their ambulance to investigate and found one of the casualties, the 20 year old man, attempting to get out of the water but the man kept being swept back into the sea as waves washed over the rocks.

EMS paramedic Mr. Greeff discarded some clothing and went into waist deep water to assist the struggling man and managed to get the man onto the rocks and out of danger.

A search commenced for the missing man and it is reported that Clifton Surf Lifeguards entered the water to search while a member of the public, Wesley Billett, 22, from Cape Town, who had been body boarding, entered the water with his body-board to assist in a search.

At that stage members of the public then spotted the body of a man washing up against rocks and Mr. Billett on his body board managed to reach the body of the man and he pulled the body around towards an accessible area on rocks where EMS paramedic Benwin Greeff and Cape Town Fire and Rescue Services officer Shanton Petersen, together with other members of the public, assisted Mr. Billett to get the lifeless body of the man onto the rocks where paramedics commenced Cardio Pulmonary Resuscitation (CPR) efforts.

NSRI Bakoven and Table Bay Sea Rescue craft responding to the scene stood down prior to arriving on the scene after it was confirmed that both persons were out of the water.

After all efforts by paramedics and emergency personnel to resuscitate the man were exhausted on the scene paramedics declared the man deceased.

The surviving 20 year old male was transported to hospital by EMS ambulance for observation for secondary drowning and he is expected to make a full recovery.

The body of the deceased man, believed to be approximately 30 years old, from Elsies River, has been handed into the care of the Forensic Pathology Services. 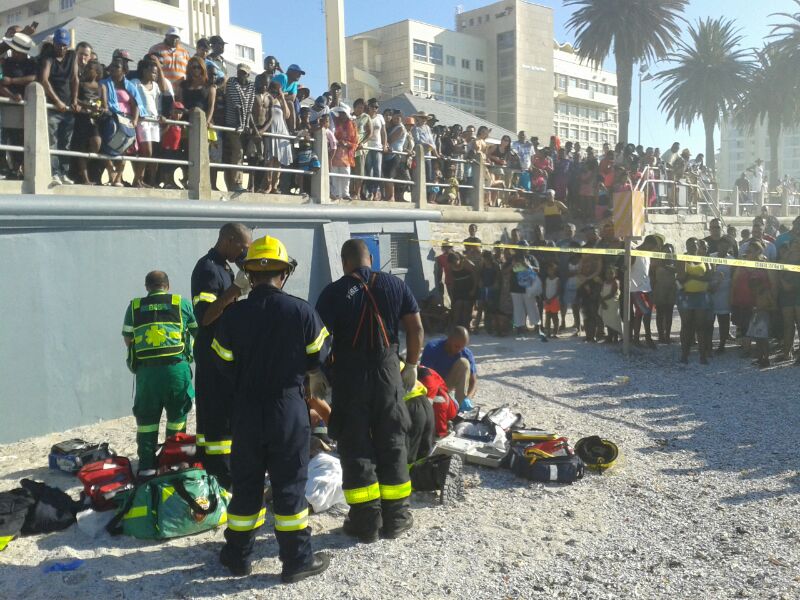