Cornel du Toit, NSRI Richards Bay station commander, said:  “At 07h31 (Thursday, 07th November) NSRI Richards Bay crew were alerted to prepare to launch to assist a solo sailor on the yacht HIKARI, deep-sea off-shore of the North East Coast.
“Canadian skipper, Sergei Morozov (aged 49) sailing from Madagascar (departed 15th October) to the Caribbean, had been in contact with NSRI Richards Bay since Wednesday morning.  He had been limping along off Sodwana, with motor failure and damage to his rudder (the rudder had completely broken off).  It appears that a host of other mechanical problems made progress difficult for the solo sailor.  He was reluctant to call an emergency at that stage, requesting rather to continue sailing towards Richards Bay but was thankful that NSRI were on alert and aware of his situation while he continued limping towards Richards Bay.
“The sailor had opted to head towards Richards Bay, aborting his original voyage plans, following the multiple mechanical problems his yacht was experiencing.
“NSRI Richards Bay remained on high alert throughout yesterday and last night and then we launched our sea rescue craft SPIRIT OF RICHARDS BAY II at 09h00 today, with the yacht 35 nautical miles out, and the skipper having finally requesting help.
“On arrival a tow-line was rigged to the yacht and the yacht has been safely towed to Port in Richards Bay and berthed at 17h40 and the skipper will affect repairs to his yacht before continuing his voyage.
PORT ELIZABETH:
Ian Gray, NSRI Port Elizabeth station commander, said:  “At 16h00 (Thursday, 07th November) NSRI Port Elizabeth crew launched to rendezvous with the Clipper Yacht Race yacht MISSION PERFORMANCE to casualty evacuate injured sailor David Griffin (aged 40) from Australia, reported to have suffered an injury to his calf after being hit by a wave yesterday while working on the bow of the yacht in rough sea conditions.
“The yacht, sailing on the yacht race leg from Cape Town to Australia had initially called MRCC (Maritime Rescue Coordination Centre) for assistance yesterday when they were 270 nautical miles off-shore of South Africa’s East coast and the skipper of MISSION PERFORMANCE opted to change course and set sail to Port Elizabeth where NSRI Port Elizabeth were tasked to rendezvous with the yacht on her arrival to casualty evacuate the injured sailor.
“We launched our sea rescue craft EIKOS RESCUER IV just after 16h00 and on arrival, just outside the Port of Port Elizabeth, the injured sailor was transferred onto our sea rescue craft and brought to shore where a Guardmed ambulance has transported him to hospital in a stable condition.
“David Griffin appeared to be a bit uncomfortable when we arrived at the yacht but he was in good spirits. The yacht has continued on her voyage to Australia.” 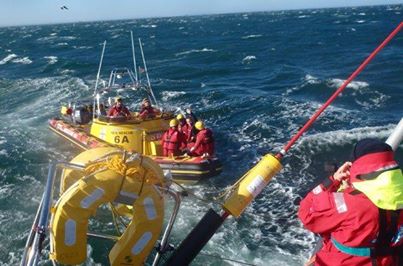