Lyall Pringle, NSRI Hout Bay station commander, said: “On Sunday, 13th January, at 15h30 NSRI Hout Bay volunteer crew were placed on alert following a request for assistance from a hiking club reporting to be hiking with 20 Cape Town hikers on the Karbonkelberg Hiking Trail, between Sandy Bay and Hout Bay and stuck at Die Braak, approximately half way along the trail, and unable to proceed.

“It was determined that their guide had never hiked the trail before. They appeared to be ill equipped with some of the hikers wearing slip-slops and some hikers having no warm gear.   It appeared that most had inadequate water supplies.
“Two of the hikers were reported to be asthmatic.
“Die Braak is a well known junction on this trail where scores of past hikers have found themselves needing to be rescued.
“The hikers had departed at 08h00 and had reportedly got lost, delaying their hike, on a hiking trail that can take experienced hikers a good 8 hours to negotiate.
“The Hout Bay branch of Wilderness Search and Rescue (WSAR) and the WC Government Health EMS rescue division were alerted and the EMS Skymed helicopter was placed on alert.
“Our plan was to deliver experienced rescue guides, by boat, to the location to assist to walk the hikers out of their predicament as well as supplies, including water, cool drinks and extra food and energy bars, which was purchased by NSRI.  Prior to being able to do this the Skymed rescue helicopter was confirmed to be responding and the WSAR rescuers would be deployed to the hikers by the Skymed rescue helicopter.  A decision would be taken to either hoist the hikers into the helicopter or for the rescue guides to hike them to safety.
“Our NSRI Hout Bay volunteer crew launched our sea rescue craft ALBIE MATTHEWS and NEDBANK RESCUER and responded and on arrival on-scene two NSRI rescue swimmers swam ashore to begin to triage the hikers.  Our rescue swimmers took hand-held radio’s, for communications, and our sea rescue vehicle was dispatched to Rocket Road, Llandudno to aid with VHF radio communications.
“On arrival on-scene our rescue swimmers were met with some confusion as there were only 15 hikers present.  They claimed that initially 4 hikers had left the group to hike back to Sandy Bay and that later another two hikers had left the group to also hike back to Sandy Bay but this brought the total hikers numbers to 21.  When initially we were informed that there were only 20 and it came to light that some hikers may have joined the group at the last minute and may have gone unaccounted for.
“Some of the hikers, apparently fearing dehydration, had drunk sea water which had accelerated their path to dehydration while also making them feel rather unwell.
“The Skymed helicopter then arrived and,in relays,all 15 hikers were hoisted into the rescue helicopter and airlifted to our sea rescue base.  Then, following a brief search, an additional two hikers, who had separated from the main group, were found near to the Boss 400 crane barge wreck and they were also hoisted into the rescue helicopter and airlifted to our sea rescue base.
“It was then revealed that the remaining 4 hikers, who had also separated from the main group, had made it safely back to the Sandy Bay car park in Llandudno without assistance and they were safe and needed no further help.
“Then, lone female hiker was spotted by the Skymed rescue helicopter, hiking on the trail, and initial thoughts were that she may also be in difficulty and that she may have also been part of the hiking group, particularly because in fading light she was alone, walking far along the trail – a good 3 hours hike, at best, to the Sandy Bay side of the hiking trail but she indicated to the helicopter crew that she was in no danger and that she was happy to continue with her walk. It was later determined that she was not part of the hiking club and we suspect that she may be a very experienced hiker on her evening walk!
“No one was injured and after consuming the supplies that NSRI had purchased for them, at our sea rescue base, all 17 hikers left to go home.” 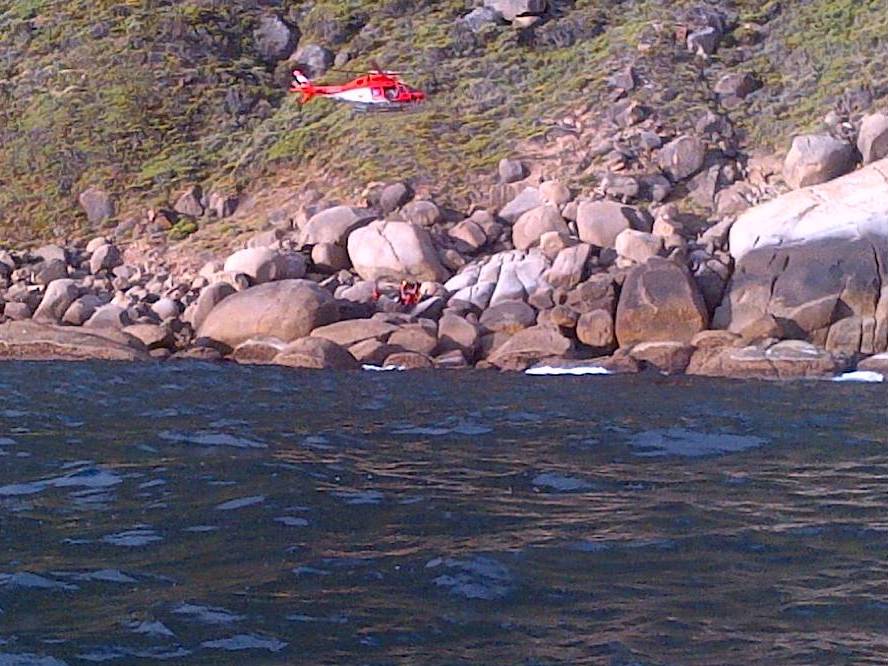