Twenty one people were swept out sea by rip-currents in one incident at around midday on Sunday 25th March. Most of the 21 people swept out were members of the local Motherwell Rugby Football Club reportedly cooling down after a rugby practice while preparing for an SA Rugby Union Easter tournament in Cape Town.

Of the 21 people swept out to sea 3 youngsters were not members of the Motherwell Rugby Football Club.

The 5 missing men are presumed to have drowned.

Seven Blue Water Bay Life Saving Club lifeguards, five who were on duty at the beach at the time and two who had run to the scene from their duty post further down the coast, have been commended for rescuing 15 people in this incident. Some of the lifeguards rescued up to three casualties at a time.
A 16th person rescued from the water was declared dead on-scene and an extensive search has so far revealed no sign of the remaining 5 missing men.

“On arrival on-scene it was estimated that at least 21 people had been swept out to sea by rip-currents. Most of those swept out to sea are believed to be members of the local Motherwell Rugby Club.

“One person, recovered from the surf by Blue Water Bay LSC lifeguards, has been declared dead.  Five people remain missing and they are presumed to have drowned.

“An extensive search, by thre NSRI sea rescue craft, a Nelson Mandela Bay Municipality Beach Managers office rescue rubber-duck and rescue jet-ski, a Blue Water Bay LSC rescue rubber-duck, the EMS helicopter, and Blue Water Bay LSC lifeguards free swimming has revealed no sign of the 5 missing men, all believed to be aged in their early 20’s and all 5 missing are believed to be members of the Motherwell Rugby Club.”

Seven Blue Water Bay Life Saving Club lifeguards, five who were at the beach at the time of the incident, and two who had run to the scene from their duty post further along the coast, had swum after the 21 people swept out to sea by rip-currents.  Some of the lifeguards had rescued up to 3 people at a time. Of the 15 people rescued alive, none were required to go to hospital although some were treated for shock and near drowning symptoms on the beach by paramedics.

The deceased body has been handed into the care of the Forensic Pathology Services.

Lifeguards and Police remain on-scene continuing with an ongoing search for the 5 missing men and a Police Dive Unit will continue the search tomorrow with a Police K-9 dog unit.

The beach was closed to swimming at 14h00 by the Nelson Mandela Bay Municipality Beach Managers Office.

It is believed that all 21 people swept out to sea were caught in strong rip currents.” 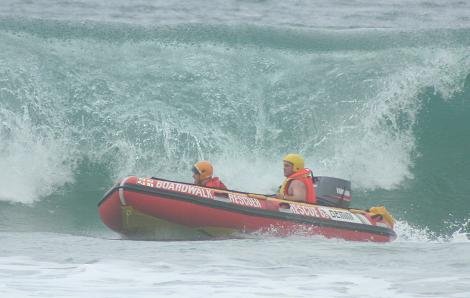