Saturday 21 January -SIMONSTOWN:At 16h05 on Saturday 21 January NSRI Simonstown volunteers were called out for a Hobie-Cat that had capsized and was trapped in kelp at Clovelly, near Fish Hoek. Our duty crew launched a sea rescue boat and responded as well as WC Government Health: EMS and Cape Town Fire and Rescue Services.On arrival we found Mr. Hartland, from Oranjezicht, had capsized his Hobie-Cat while sailing solo in False Bay and had drifted onto rocks between Clovelly and Kalk Bay harbour.Two Kalk Bay residents, Johnathan Gloyd-Jones and his brother Sebastian (about 16 years old), had donned wet-suits and had swum out to assist Mr. Hartland after noticing that he was in trouble.Well known local fisherman George Mandolis, aboard his fishing trawler Kalkie had also launched his boat to assist and George had managed to rig a tow-line onto the Hobie Cat and had pulled the it free from the rocks. The two teenagers assisted George to attach the tow-line.Our NSRI team confirmed that no one was injured and George towed the Hobie Cat to Kalk Bay harbour where it was recovered from the water using a Harbour crane.MYKONOS:At 15h12 Mykonos volunteer sea rescue duty crew were called out to The Cove, near Mykonos where a Hobie-Cat had capsized with Capetonians Johan van Staaden, 45, and Genevieve Perks, 35, both from Bloubergstrand on board. They were drifting and appeared to be unable to right their craft.Off-duty NSRI Air Sea Rescue swimmer Rob Fine and an unidentified bystander, who happened to be on the beach at the time, both swam out to assist the sailors after Rob confirmed that NSRI Mykonos had been activated.Rob, the bystander and NSRI Mykonos volunteers aboard our sea rescue craft helped the two sailors to right their craft and the two sailors then sailed their boat to Mykonos harbour without further problems. Our sea rescue craft monitored their safe passage and Rob and the bystander swam ashore.' ST FRANCIS BAYNSRI St Francis Bay volunteers are continuing an extensive search at St Francis Bay main beach where a man, about 20 years old, from St Francis Bay, went missing in the surf while swimming earlier today.Our duty crew were called out at 11h05 and launched our sea rescue boat and a search so far has revealed no sign of the man who is missing and is presumed to have drowned.A Police dive unit will join in the search.KOMMETJIE :At 15h43 NSRI Kommetjie duty crew were called out for a man missing in the surf at Inner Komm, Kommetjie, near to the Kommetjie boat slip-way. The 29 year old father was swimming with his 8 year old son when he got into difficulty and disappeared under water at around 11h30 this morning.Our duty crew launched the DISCOVERY rescue runner and NSRI rescue swimmers free dived on the scene to try to find the missing man.The SA Police Force were on-scene assisting in the search and had taken the child home to fetch his mother and other family members. A police dive unit was activated to respond to join in the search. The NSRI volunteers located and recovered the body of the man onto the sea rescue craft. He was found by NSRI volunteers floating semi-submerged under water near to where he had been reported to have gone missing.The body of the man was brought ashore aboard the NSRI sea rescue craft and handed into the care of the Forensic Pathology Services. The family are receiving trauma counseling. The deceased man is Christopher Robinson, from Ocean View.Police have opened an inquest docket.
Share 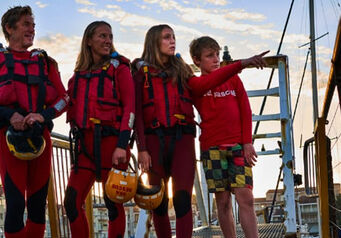