PE based Sea Rescue Coxswain and WaterWise educator Marcus Oshry traveled to the Baviaanskloof to teach children about water safety. This is his story.

It was for this reason that I decided to phone the principle of Zaaimanshoek Primary to organise a WaterWise workshop. From previous visits to the Baviaanskloof, I already knew how many rivers and streams there were, but when the principle told me that most of his students have to cross water of some kind just to get to school, I knew that a trip into the Baviaanskloof was necessary. 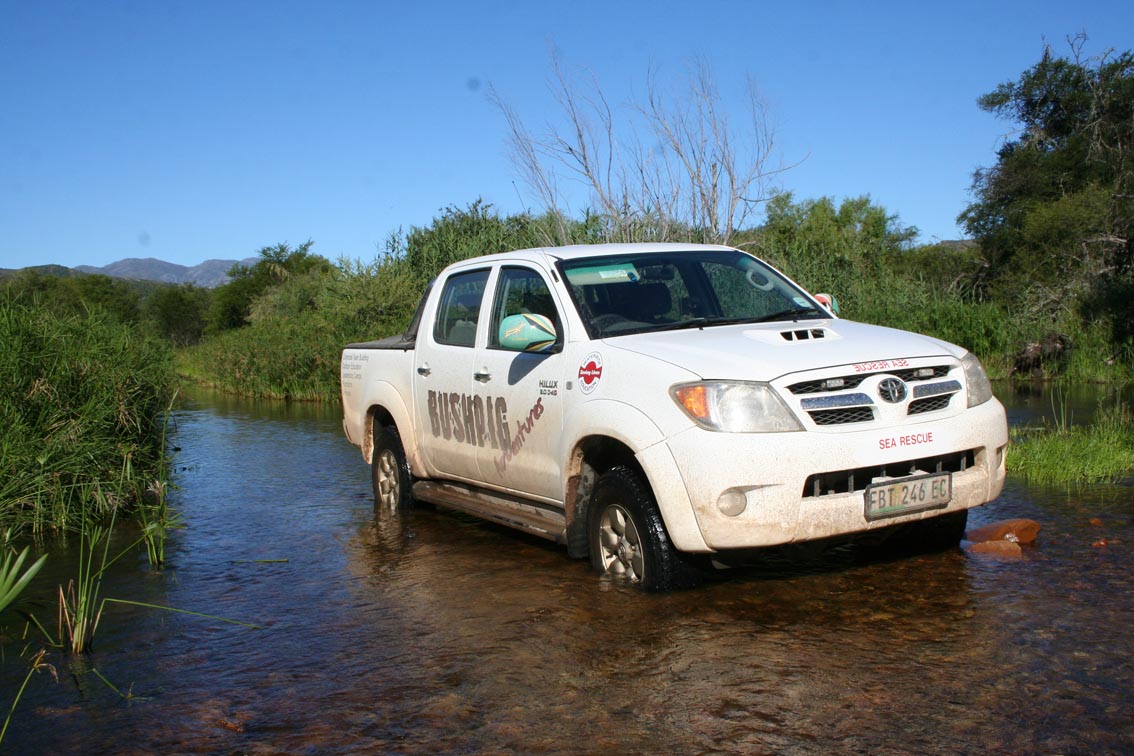 Over the past 2 months, the Eastern Cape has had large amounts of rain and this has hampered the trip as I kept on being informed that the route was inaccessible due to the low level bridges being too deep to cross.  If I couldn’t get in, this meant that the locals within the reserve couldn’t get out.  Once the rains had let up and the weather had cleared, I packed my trusty Toyota and headed off into the Baviaanskloof. 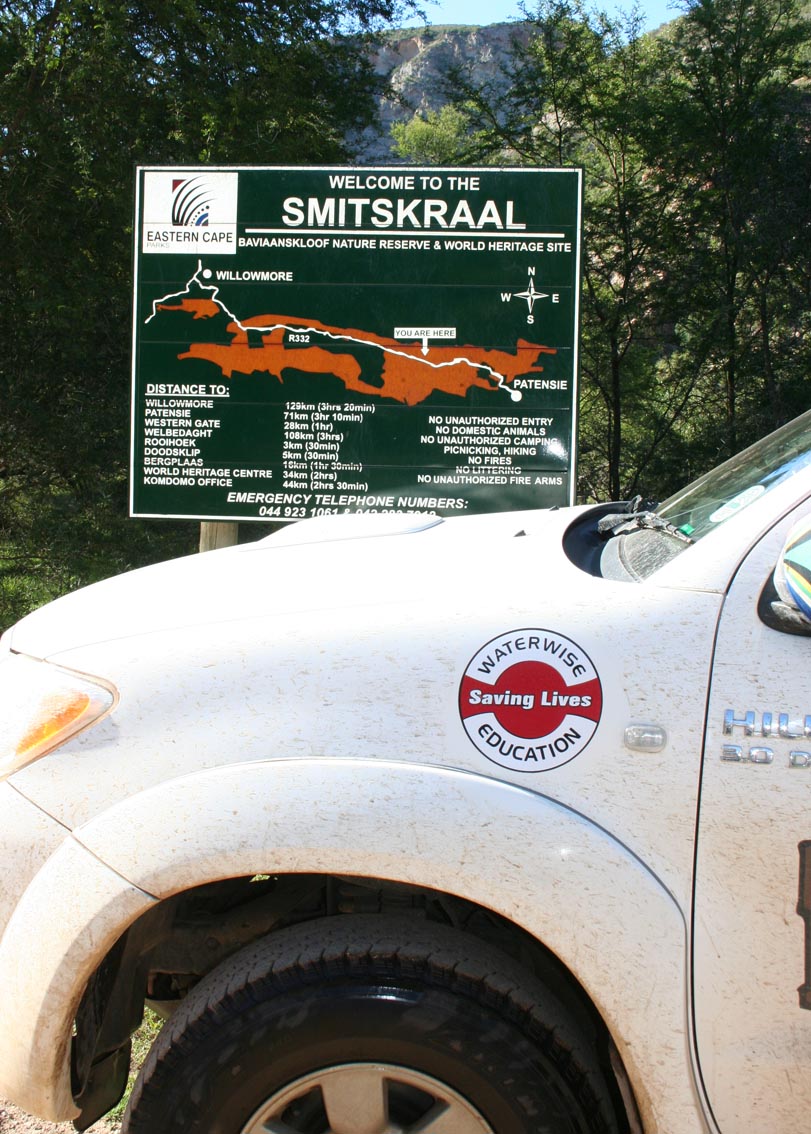 The trip into this magnificent reserve is breathtaking. The views from the top of the mountains to that of the marshy river crossings in the valleys are amazing. The day before I left I had phoned up the owner of a camp spot which looked close enough to the school and asked her for a camp spot for the night before I go to the school. Her response was typical of the friendly people of the Eastern Cape. She said, “We aren’t there at the moment but you are welcome to camp over. Just pop R60 under the door and close the gate on your way out.”

I love the Eastern Cape! 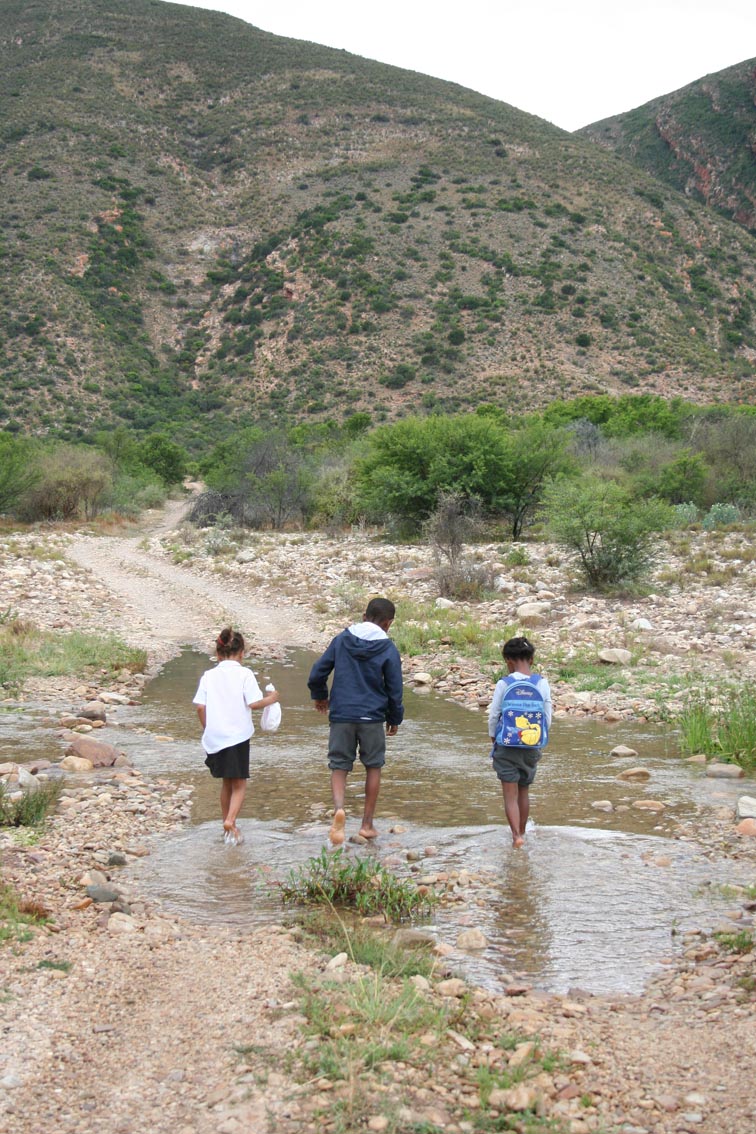 During my trip to the Doringkloof Camp Site, I counted no fewer than 53 low level bridge crossings. 23 of these had water flowing over the top of them.  Some of them were flowing river beds that had to be traversed.  This is a staggering amount of water that covers this mountainess area and one can only imagine the Logistical nightmares the local children must have just getting from home to school on a daily basis.

After a great night’s rest at Doringkloof Camp Site, I set off to find the school.  It was still far too early to be at the school so after finding it, I set off in search of a high point to get cell phone reception to let my wife know I hadn’t fallen off a cliff or drowned crossing a river.  I hadn’t spoken to her since entering the reserve at 2pm the previous day.  After traveling for another 50km and having stopped on every koppie, showing my phone up to the gods searching for signal, I resigned myself to the fact that there was just no way I was going to be getting any signal.  I stopped at a local’s house along the road and asked them where I could get cell phone signal.  With her broad Eastern Cape smile, she laughed at me.  She invited me into her house and showed me her land line.  I paid her R20 to call my wife.  It was the best R20 I have ever spent.  She had a few homemade curios which I also bought just to repay the favour.

After my successful search for telephony, I headed back towards Zaaimanshoek Primary to present my WaterWise Workshop.  The little settlement is only accessible by crossing a low level bridge.  The learners packed themselves into their tiny school hall and they ranged from 7 years of age up to 15 years old. Normally my talks are centred around rip currents but today they needed to be modified to “How to get to school safely”.  I also included what they should do if they are washed off one of the low level bridges and taught them bystander CPR.

The class was very interactive and when it came to me asking them how many of them had to cross rivers or streams to get to school, at least half of the school put up their hands.  They spoke of a place below the school called “Die Gat”.  This is their swimming pool.  It is a small section of the river which is 50m from their classrooms where they go to swim if it is hot.  It is not particularly deep but there are holes caused by the eddies and also glass from the small children that throw bottles off the top of the kloof.  This causes all sorts of problems for the bathers in the pool as they stand on the glass and cut themselves.  It also causes them to lose their balance and if they can’t swim, they swallow water.  The holes caused by the eddying currents, also cause the smaller children to lose balance and fall over.  Again if they can’t swim, they start to panic.  I managed to show them how to make a throw line with a empty 5 litre container.  They are now going to keep one next to “Die Gat”. 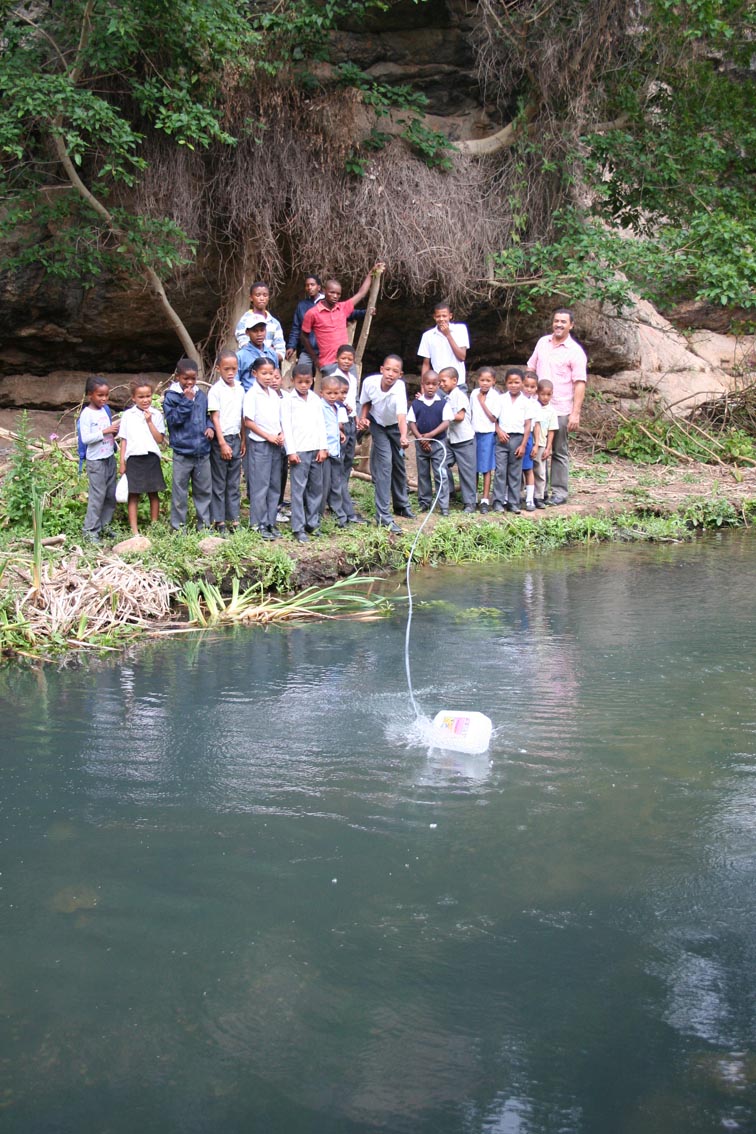 After the WaterWise Workshop, the Principle told me that during the rains, they were trapped at the school for 2 weeks.  They couldn’t get out of Zaaimanshoek and nobody could get in.  He says that the river rises 2 meters very quickly and that they have watched people’s cars swept off the road when the waters come down. 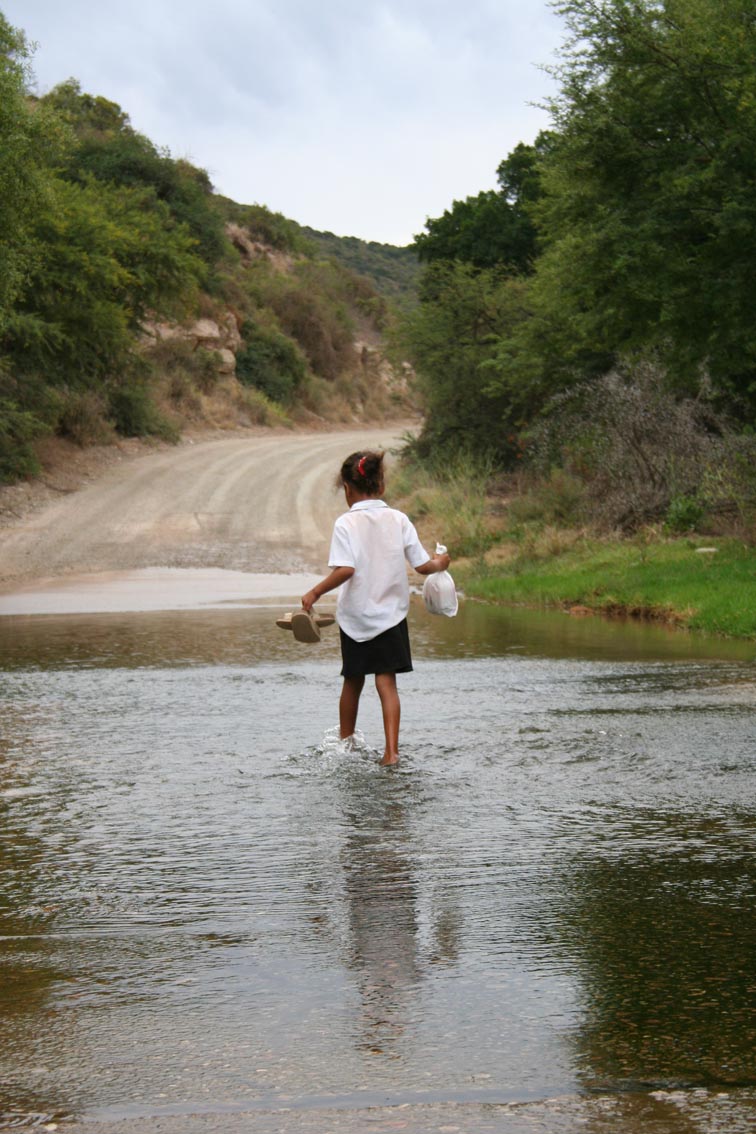 Too often the assumption is made that water safety is relevant for coastal school children and not enough attention is given to those inland such as Zaaimanshoek Primary.  I hope that the water safety education that they have been left with will never be needed, however in the event that it is, I hope that it dramatically changes the outcome of what might be.  Even if  just one child’s life is spared, it would make this trip worth it. 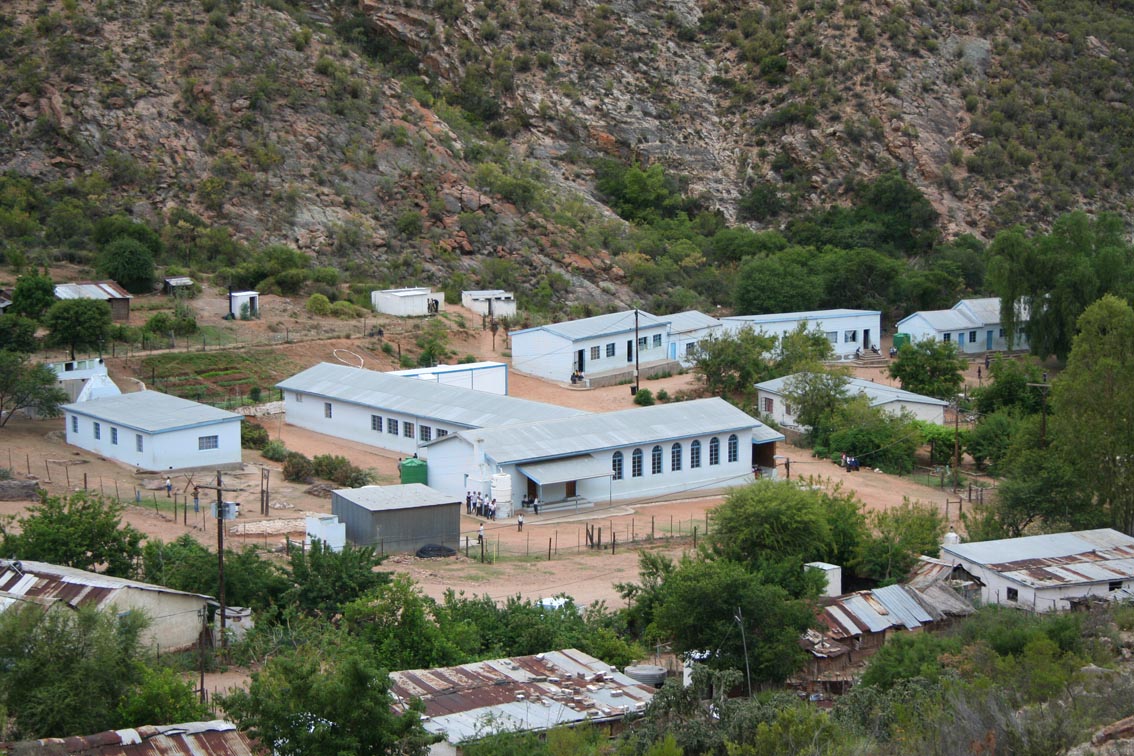 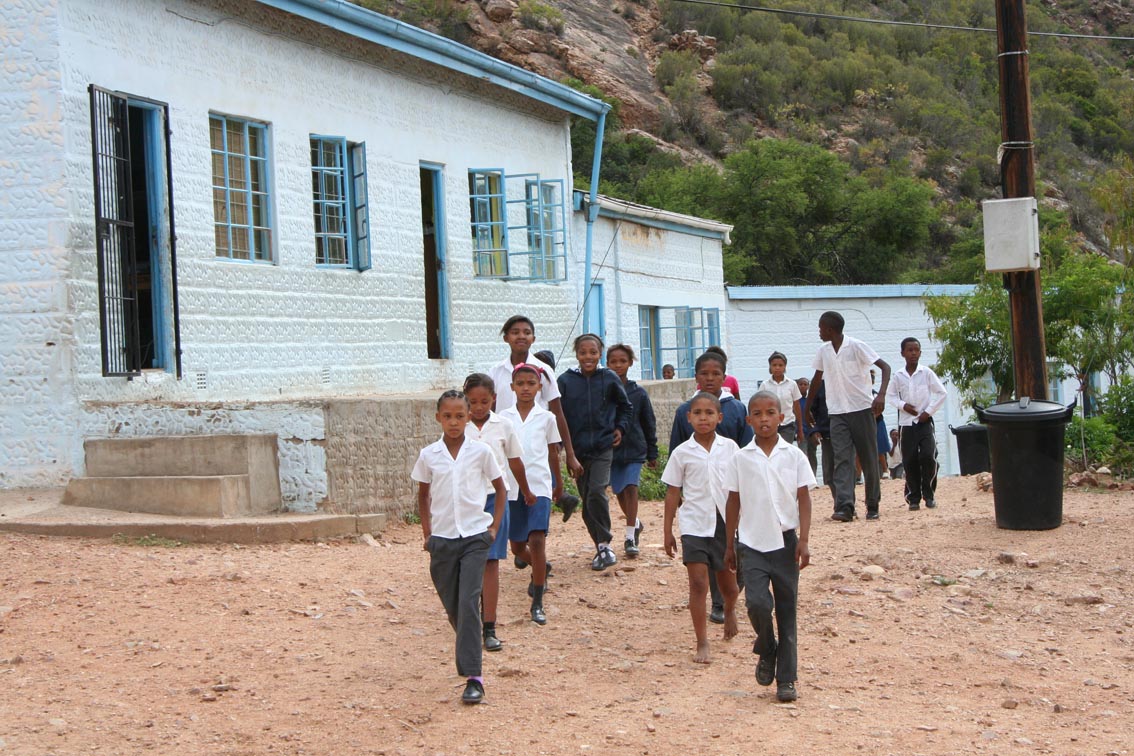