Skip to content
On Wednesday 28 September at 12h24 NSRI Simonstown volunteer duty crew were activated following reports of a man being bitten by a shark while swimming at Clovelly Corner close to Fish Hoek Beach.
NSRI Simonstown volunteer duty crew launched their sea rescue craft and EMT (Emergency Medical Treatment) paramedics, CMR (Cape Medical Response) paramedics, Metro EMS, ER-24 private ambulance service, the Discovery ER-24 helicopter, Disaster Management and Fish Hoek Surf Lifeguards responded.  The SA Police Services, responded to assist.
On arrival on-scene a 42 year old man was found on the shore suffering complete amputation of his right leg, above the knee, and partial amputation of his left leg, below the knee. It appears he was rescued from the water by a bystander who left the scene before we could identify him.
The 42 year old man is believed to be a British citizen but resident locally in South Africa, and believed to be from Plumstead, but this has not yet been confirmed.
The man was stabilized on-scene by paramedics and airlifted to Constantiaberg Medi-Clinic hospital by the Discovery ER-24 helicopter in a critical condition but he is now believed to have been stabilized.
The man was conscious when paramedics attended to him on the beach but was sedated on-scene by paramedics in their efforts to stabilize the patient.
From what we understand the City of Cape Town shark spotters had flown the “sharks present – no swimming” flags since early this morning and bathers to Fish Hoek and the individual had personally been warned, by the shark spotters, not to swim due to the presence of at least 3 White Sharks visible in the water close inshore since this morning.
At this time of year warnings are also posted, through the press, by NSRI and the City of Cape Town warning of higher than normal concentrations of shark activity close in-shore particularly along the False Bay coastline where shark researchers have identified the phenomenon of increased shark activity close inshore.
We are encouraging bathers and surfers not to enter the water today and to be generally cautious swimming or surfing along the False Bay Coastline and, where shark spotters are present, to obey the shark spotters instructions. 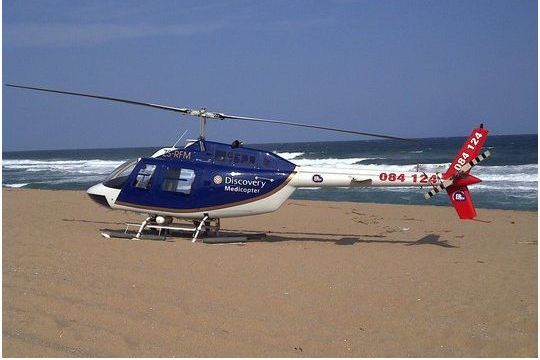