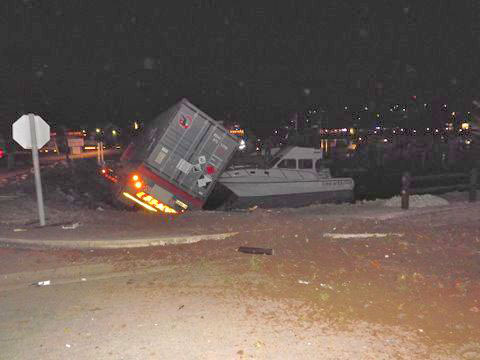 At 21h31 on Sunday 31 July 2011 NSRI Port Alfred’s volunteer duty crew and Emergency Services were called out after a truck crashed into the Port Alfred harbor.

NSRI volunteers responded to the scene directly and fearing that there may be persons trapped in the truck, we took the station commander’s private boat, AQUAVITAE as she was moored literally 10 meters from the accident, allowing a full crew to be on scene very fast.
Local Fire and Rescue Services, the SA Police Services, Metro EMS and Traffic Services also responded.

We found a large truck and trailer in the water. The truck, with two large containers on the trailer were fortunately empty.

It appears that the truck had left the road after striking a car which had allegedly run a stop street while being pursued by Police.
The truck had then apparently swerved and crashed through a fence and fell over the edge of the harbor into the water. The driver left the cab through the passenger window and managed to get himself out of the water safely.

He had minor injuries and was taken to hospital by Metro EMS in a stable condition suffering only from shock.
Police arrested youths in the car that they had been chasing.

An East London heavy duty tow-truck service were called. NSRI Port Alfred assisted on the scene by moving two large boats that were in the way of the recovery operation. A third boat, that was also in the way of the recovery operation, was moved by its owner.
The truck was removed from the water by two large tow-trucks using winches and towed to East London. The operation to remove the truck from the water was completed by 02h30 this morning. 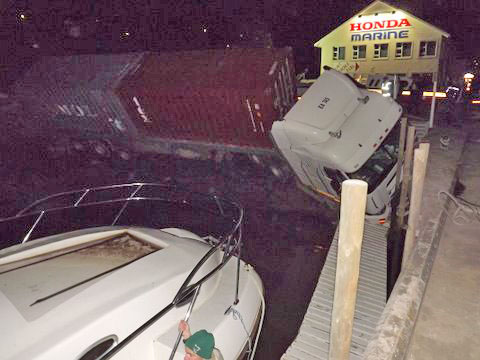