At 10h30 on January 7th the SA Whale Disentanglement Network launched from Yzerfontein harbour, to search for and free a 12 metre Southern Right whale. The whale was reported by rock lobster fisherman to be entangled  in rock lobster rope and flotation buoys in the vicinity of Dassen Island.

The whale was found 1 nautical mile off the Island entangled in rope and buoys anchored to rock lobster nets.
Rope entangled the whales tail, torso, mouth and head and it appeared to be exhausted appearing to be anchored to the rope with little mobility.

We worked our way from the head, to the mouth, to the torso and finally the tail, gently cutting the rope off. Poles with specialised cutting knives attached were used.

The whale showed no sign of resistance and the operation was completed at 12h27, and once freed the whale swam off confidently.
During the operation DNA samples were collected from the whale for scientific analysis.

One pole was bent slightly during the operation and no other equipment was damaged. Normally in operations of this nature we lose or damage equipment.

The whale disentanglement Network team, in this instance made up of members from the Department of Environmental Affairs – Oceans and Coasts, NSRI volunteers and Cape Nature Conservation officers, 9 crew in total were responsible for the release. The two NSRI  sea rescue craft from Yzerfontein, the Rotary Onwards and the Spirit of Iffley were used by the team.

Once the operation was completed we were requested by Cape Nature Conservation officers on Dassen Island to transport an injured White Chin Petrel to SANCOB in Cape Town for treatment and rehabilitation.

THE SA WHALE DISENTANGLEMENT NETWORK (SAWDN) IS A SPECIALISED UNIT THAT SET UP A NETWORK OF VOLUNTEERS IN 2006 TO DEAL WITH THESE TYPES OF SITUATIONS AND COMPRISES VOLUNTEERS – FROM NSRI, THE DEPARTMENT OF ENVIRONMENTAL AFFAIRS – OCEANS AND COAST, SA NATIONAL PARKS, CAPE NATURE, THE SA POLICE SERVICES, VARIOUS AQUARIUMS FROM AROUND SOUTH AFRICA, THE NATAL SHARKS BOARD, VARIOUS OTHER ORGANISATIONS AND VOLUNTEERS, WITH THE SUPPORT OF THE DOLPHIN ACTION AND PROTECTION GROUP. 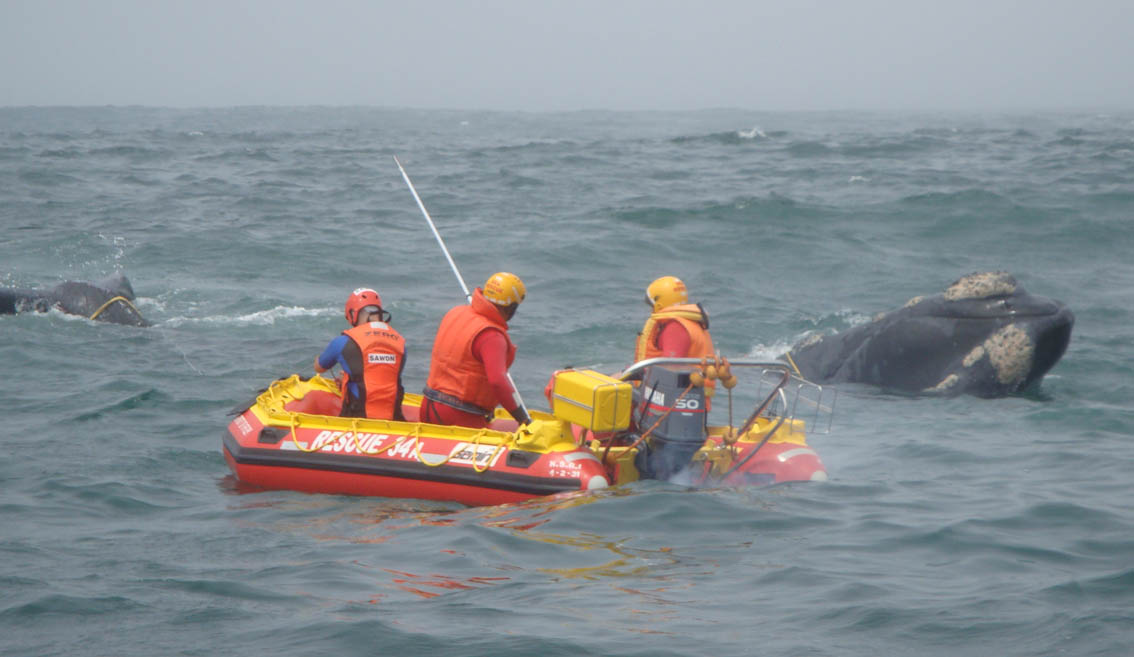