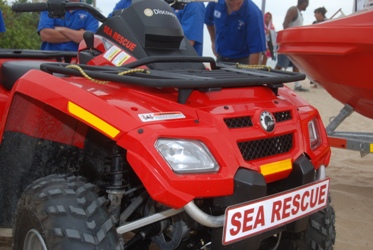 Sea Rescue Plettenberg Bay volunteers responded to the scene in our 4×4 rescue vehicle and our Discovery Quad Bike.

On arrival it was determined that the female, 16 year old Nikki Gericke, was already out of the water after being rescued by her friend, Steven du Preez, 16, who had been body surfing with her at the time. Both are from Plettenberg Bay.

Nikki was treated by our sea rescue medics after she was found to have swallowed quite a bit of water and we transported her to a local hospital where she will be kept overnight for observation although she is in a stable and satisfactory condition.

It appears that Nikki and her friend were body surfing when Nikki got into difficulties in the surf after feeling faint in the water and she appears to have then swallowed water when Steven managed to rescue her and get her safely to the beach where a bystander called the NSRI.

When our sea rescue medics reached the scene they found Nikki to have a very low pulse rate and she was treated for near drowning symptoms and secured onto a trauma board and spinal immobilised as a precaution before being transported to hospital in a stable condition.