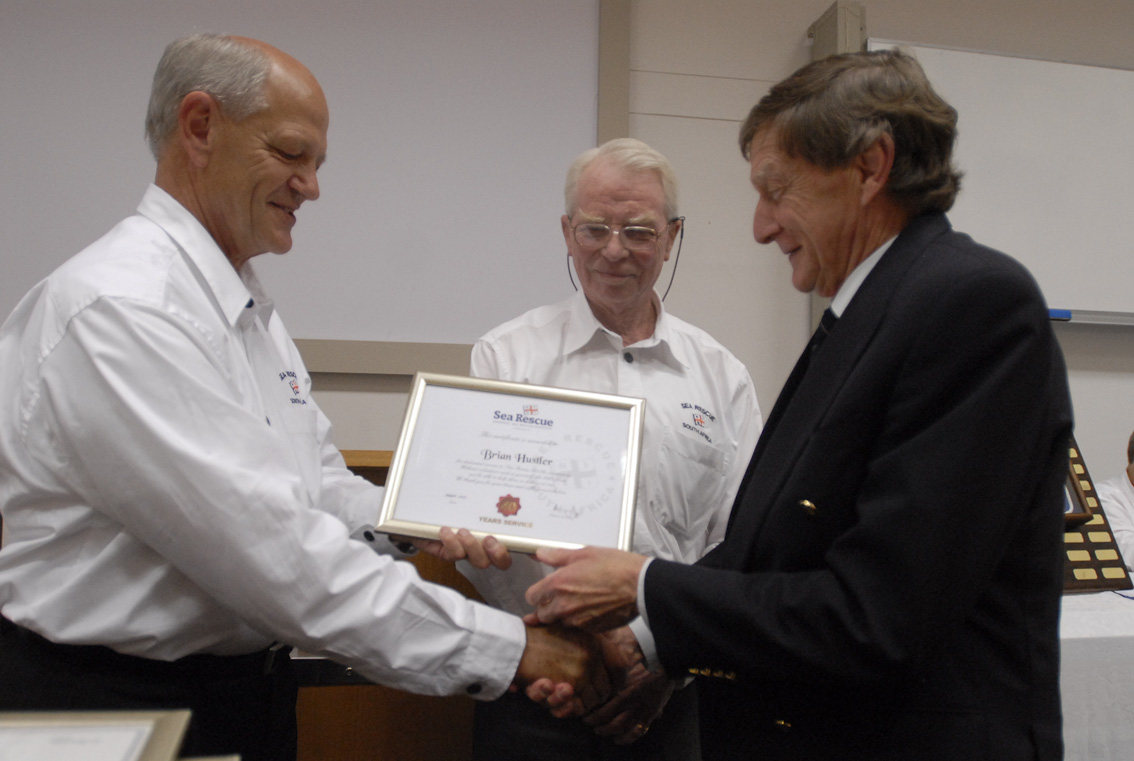 Gallantry Award for acts of gallantry, skill and initiative at sea:

Gold
For a rescue which has been effected as the result of an act in which outstanding gallantry, skill and initiative have been shown.

Silver
For an act of conspicuous gallantry, skill and initiative.

Bronze
For an act of conspicuous gallantry.

Bravery Award
To recognize acts of courage, by persons other than NSRI personnel, at sea or on inland waters.

Directors’ Thanks on Vellum
For remaining members of the lifeboat crew, when a Gallantry Award is given to any boat’s crew member, as a memento of their part in that Award service.

Directors’ Thanks
For especially good work or service afloat by NSRI personnel or an outside person assisting the NSRI with an operation.

Letter of Appreciation
For good work or service afloat by NSRI personnel or an outside person assisting the NSRI with an operation.

Marmion Marsh Floating Trophy
For especially noteworthy service to the cause of sea rescue in South Africa, over a number of years.  May be awarded annually to any person or organisation
(Silver cup with miniature)

Marmion Marsh was the Managing Director of Safmarine from 1968 until he passed away after a short illness in 1985. He was a great supporter of NSRI. Safmarine too supported us in numerous ways, including sponsoring boats, shipping of rescue craft from Europe to South Africa, sitting on our Board of Directors and hosting our AGM’s at their premises, at no charge.

Funding was donated to NSRI by Marmion Marsh specifically for training as this was his passion.

After the passing of Marmion in 1985, Pat O’Sullivan (our Chairman at the time) elected to personally pay for a trophy in the memory of Marmion Marsh for all the support that he had given NSRI over many years.

Alric Simpson Floating Trophy
Awarded annually to a person who or an organisation which has rendered distinguished service to the NSRI.  It is generally considered appropriate as an award for an isolated act particularly associated with the NSRI.

Mrs Eleanor Simpson and her two sons chose to sponsor the Hermanus Brede (10m rescue boat) in memory of her late husband Alric.  Although farmers in Elgin, her sons had spent many happy holidays at a sea and sailing camp in Hermanus, and the area is close to her heart.  She chose to name the boat “South Star” and she was present at the naming and blessing ceremony in 1995.

Although Mrs Simpson did not want the boat named after Alric, she wanted an award named after him, and she wanted a trophy different to the norm. Our Operations Director at the time, Allan Cramb,  was tasked to come up with an idea; and the Alric Simpson knot board was made.

Mrs Simpson now lives in Somerset West and is a dedicated member of our Life boat Circle.

Directors’ Thanks
For especially good work or efficient service ashore.
a) NSRI personnel
b) Outside organisations or persons assisting the NSRI in fundraising.

Letter of Appreciation
For good work or service ashore by NSRI personnel or an outside person assisting the NSRI.