Swimming is a life skill and learning to swim at an early age will reduce drowning incidences, especially among children. In many underprivileged communities in South Africa, this would never become a reality. This is according to Andrew Ingram, Drowning Prevention Manager at the National Sea Rescue Institute (NSRI) who is happy to announce that the NSRI has just launched its second survival swimming centre (SSC 2) in the Eastern Cape. “After the success of our first Survival Swimming Centre in the Western Cape, we are excited to launch SSC 2 in Tombo Village, 19km outside of Port St Johns which our statistics show has the highest incidents of drownings in the Eastern Cape Considering that the province is the second leading province with drowning incidents in the country, it made it crucial that the centre comes here” he states. 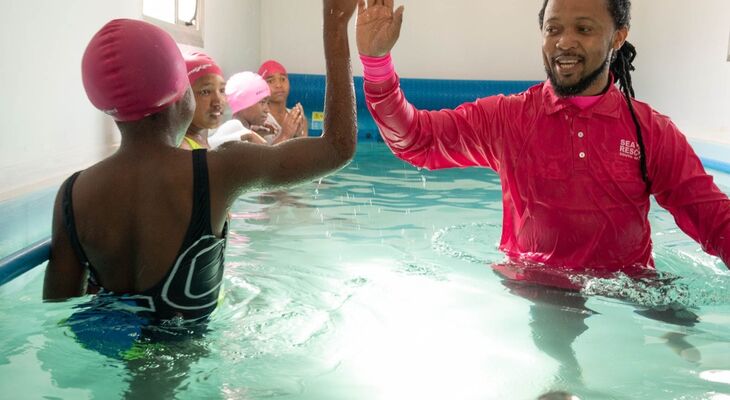 Ingram further explains that these lessons will be offered at no cost to the children in and around the village. “The centre will be placed at Noah Christian Academy an independent school in Tombo. This school was identified by our National Water Safety team leader who works in the area.”

Nwabisa Vera Nkata, Principal at Noah Christian Academy says that they are extremely excited to be the first school in the Eastern Cape to receive the SSC. “Considering that swimming lessons are only afforded by wealthy families, having this centre will be so special for our kids and the community at large. We stay in a village that is close to the Umzimvubu river and the coast where young and old people drown, so equipping our learners with swimming lessons will be a huge advantage” she adds.

The centre is built in a twelve-metre shipping container which features a six-meter-long swimming pool, an office space for the instructor and a change room for the students. In addition to some of the safety features, the pool is one metre deep allowing small children to stand in it. Being a shipping container means that the pool can be completely locked up when not in use to ensure there is no danger of anyone entering the pool while instructors are not on duty.

The rollout of the swimming lessons will start off with teaching the Grade 7s who will be able to take their swimming skills with them to high school. This will be followed by interested school teachers and they will be led by the school principal

Ingram explains that by targeting teachers as well means they will eventually become survival swimming instructors. “The set of skills of becoming a Survival Swimming Instructor is something that we will be leaving the teachers with for the benefit of not only the school but the community as a whole.”

The fundamental lessons that will be covered during the swimming lessons include how to hold your breath under water, opening your eyes whilst under water, how to float and to safely propel yourself for at least 5 metres in water.

“The swimming centre is incredibly advanced with built-in cameras inside that are monitored by the NSRI’s Emergency Operations Centre. In addition to that it has numerous monitoring devices to check the water temperature, air temperature, humidity, and water quality,” Andrew states.

“This project has continued to receive incredible support from Fluidra in particular and the swimming pool industry in general. This is our first Survival Swimming Centre that has a title sponsor – Thank you to Speedo South Africa and their Swim United initiative for doing this for the children of Tombo!”

“We hope to create a swimming culture amongst the children and teachers who we have taught how to swim. The skills the teachers will gain will allow them to teach upcoming students how to survive in water,” concludes Ingram