Quick-thinking bystanders save the lives of two children

A trip to the beach turned into a lesson on the dangers of rip currents, as well as the value of a well-placed Pink Rescue Buoy for a group of learners at Swartvlei Beach.

A local school group was at the beach when a 12-year-old girl was swept away by a rip current while swimming. Her friend swam after her and tried to help her, but unfortunately the current got the better of him as well.

A quick-thinking teacher told her students to get the Pink Rescue Buoy that was stationed at Swartvlei Beach, while another called the NSRI as well as local emergency services.

According to NSRI Wilderness duty coxswain Ian Gerber, eye-witnesses reported the incident to the Wilderness Base, and NSRI Wilderness rescue swimmers responded directly to the scene. An NSRI rescue vehicle also responded and a JetRIB was launched.

A brave matric learner from the same school, who is also a surfer, grabbed the Pink Rescue Buoy and swam towards the stranded students.

“The matric student reached the 12-year-old girl and kept her afloat using the Pink Rescue Buoy,” Ian says. “A teacher shouted towards the 12-year-old boy, and indicated that he must swim parallel to the beach to escape the rip current. The boy, being a strong swimmer, swam out of the rip current and he managed to get back to shore safely without assistance.”

A man who had been paragliding with his friend saw the youngsters in the water, and sprang into action. He quickly fetched his kite-boarding equipment from his car and launched into the water. He managed to reach the two students who were still in the water with the Pink Rescue Buoy, and used his kite board to guide them back to shore.

When the NSRI and emergency services arrived on the scene, the children and the teenager were safely out of the water. They were assessed by paramedics and treated for mild hypothermia before they were released back into the care of their teachers.

“The NSRI would like to commend the German man and the matric teenager for saving the life of the child. We also want to acknowledge the quick reaction and instruction given by the teachers,” Ian says. 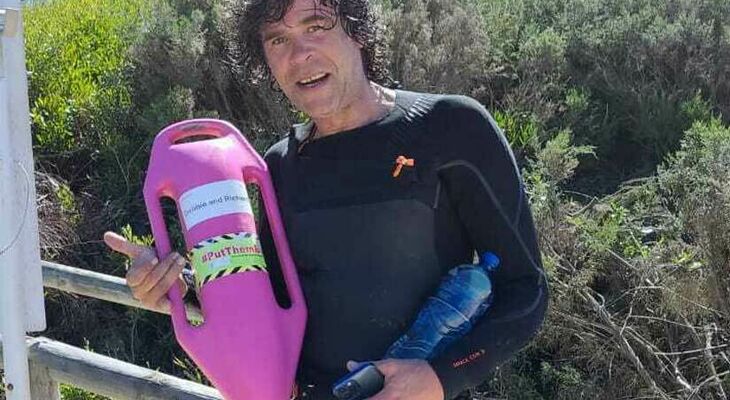