Whale Carcass removed from the shoreline

In an operation accompanied by the Police Dive Unit, NSRI Table Bay and Police divers assisted the City of Cape Town (CoCT) Marine Animal Stranding Network to remove a 9 meter Humpback whale carcass from where the carcass had beached amongst rocks on the Sea Point shoreline.

On Thursday morning, 9 December, a whale carcass was found washed ashore on the Sea Point shoreline.

During the day The Department of Environment - Oceans and Coasts had attached a bridal to the whale carcass. Police divers swam the rope attached to the bridal out to sea and they anchored the rope attached to a floatation buoy in preparation for an operation to be carried out at high tide.

NSRI Table Bay duty crew were alerted during Thursday and at the request of the CoCT prepared an operation, in cooperation with the Police Dive Unit, to tow the whale carcass at the next high tide at 19h35 to OPBC (Oceana Power Boat Club) where CoCT solid waste management were arranging to remove the carcass.

At 19h00 the sea rescue craft Spirit of Vodacom and Spirit of Day were launched accompanied by Police divers and we rendezvoused with a Department of Environment rigid inflatable craft, Sunray, on the scene.

The whale carcass was then towed out to sea and during the early stages of the towing operation the carcass began to sink.

It was agreed to tow the whale to deeper water to be released and at about 2 to 3 nautical miles off-shore, at a depth of 50 meters, the towing rope to the carcass was released and the carcass sunk.

The operation was completed at 21h00. 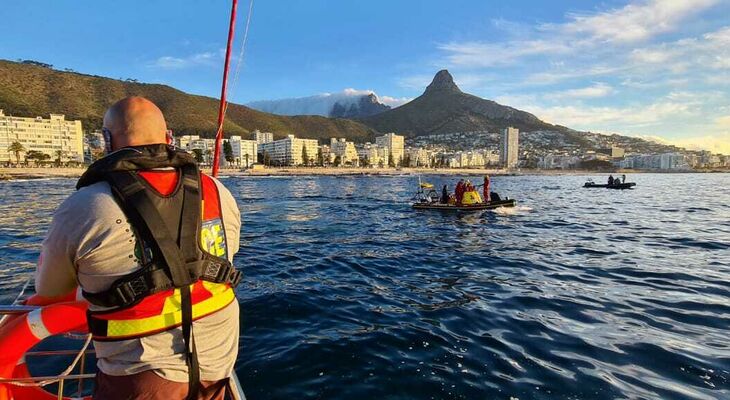 Whales assisted in a disentanglement operation: