Grateful thanks to an “old friend” and now Platinum Partner, Vodacom

Vodacom has travelled a long road with the NSRI. We take a look back to when the journey started and how the company has supported Sea Rescue for more than two decades.NSRI CEO Dr Cleeve Robertson has an overwhelming response to the question of how Vodacom has supported the NSRI and, indeed, other emergency services, since cellphones and cellular technology ‘became a thing’ in the ’90s. Dr Robertson recalls: “I remember in the mid-’90s when cellular technology was in its infancy and the emergency services were watching the gradual rollout of masts and handsets with interest. I was in the Emergency Medical Services when Vodacom handed us free handsets and free contracts, and the NSRI was a likewise recipient at about the same time.”Hospital staff and others involved in emergency medical and rescue services relied on pagers and radios in those days, Dr Robertson says. “No-one could have imagined how life would change, and that in the 21st century, we’d be carrying our ‘office in a handset’.” But, he adds, “Not only did it change the way we worked but it revolutionised rescue. For the first time, someone trapped or injured in an incident could call directly from the scene, give an accurate location, negate a costly search operation and massively speed up the rescue! It’s been incredible, and Vodacom has been with us on that journey, right from the start.”In the spirit of thingsVodacom’s support of Sea Rescue also included part sponsorship of a number of vessels. In the early 2000s, the then CEOs of Vodacom and the NSRI, Alan Knott-Craig and Ian Wienburg respectively, began negotiating Vodacom’s involvement in the acquisition of a number of assets for Sea Rescue bases around the country. As is customary, vessels are named after their sponsors, and gradually Vodacom SurfJet, Vodacom Rescuer I, II, III and IV were deployed at various stations. In 2008, Vodacom sponsored the 13m Spirit of Vodacom that is still in service at Station 3 (Table Bay) at the V&A Waterfront in Cape Town.Then, from 2006 to 2008, a joint venture between the NSRI, Vodacom, Netcare 911 and SA Lifesaving saw a surf rescue helicopter solution deployed along the coastline.To date, Vodacom’s name is carried with considerable pride by the NSRI on seven Vodacom Rescuers, as well as the Spirit of Vodacom and Vodacom SurfJet, the latter housed at Station 9 (Gordon’s Bay).Helping us to save lives, changes lives and create futuresIt’s been more than two decades of support and, in 2020, the NSRI formally welcomed Vodacom onboard as a Platinum Partner in recognition of everything the company has done, and continues to do to enable Sea Rescue to do what we need to – save lives, change lives and create futures.“Vodacom continues to support us over a network of almost 50 stations across the country,” Dr Robertson emphasises. “Of course, communications have changed from just telephony to a much broader range of services to fulfil a range of communication needs within emergency services. The result is massive advances in the accessibility and availability of emergency services in the maritime rescue field.”“The latest addition to our suite of services is the SafeTRX rescue app, delivered, of course, through Vodacom, free to users from the iStore or Google Play Store.” 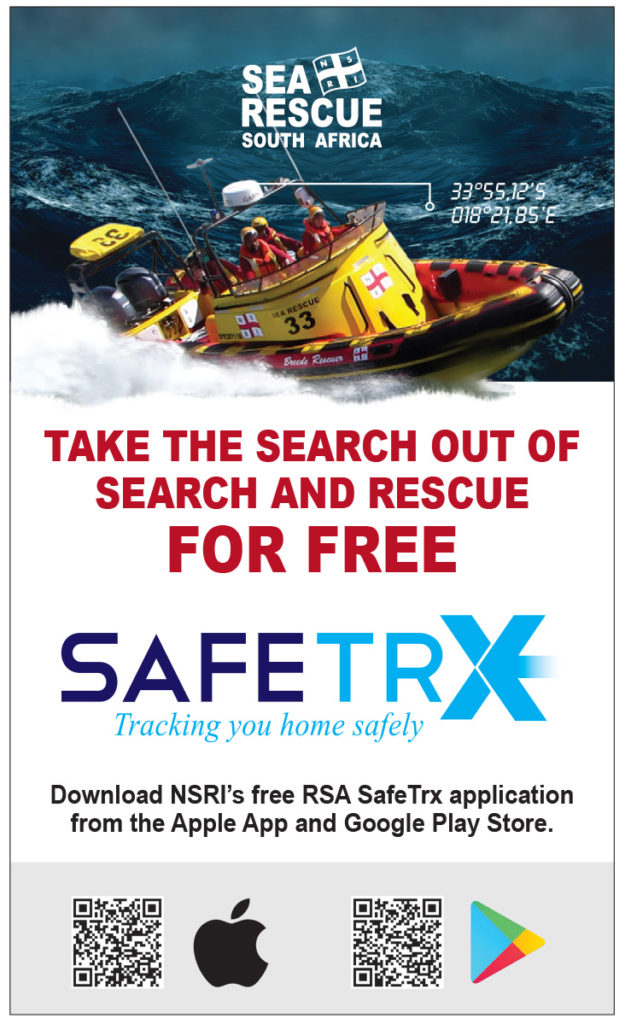 “Vodacom has been a wonderful partner, loyal donor and a friend to all the people we rescue! Salute!”
Share