Sunday, 6 December. Incidents on the weekend

TABLE BAY:On Sunday, 06 December, NSRI Table Bay duty crew launched the sea rescue craft Spirit of Vodacom to assist a local man, Zirk Botha, who had embarked on a row to Rio De Janeiro (Row to Rio 2020) on a modified rowing craft.It appears that he had initiated his voyage on Saturday, hoping to make best of a brief weather window to allow him the opportunity to get to deep sea, but the weather turned preventing this effort and North of Robben Island on Sunday he aborted the voyage choosing instead to turn around and head back to Cape Town.NSRI were tracking his progress at the time and on noticing that he had turned around NSRI EOC (Emergency Operations Centre) investigated and although Zirk was in no imminent danger NSRI Table Bay went to assist him and towed his rowing craft into the Port of Table Bay without incident.Zirk will monitor the weather to decide on a new launch date. 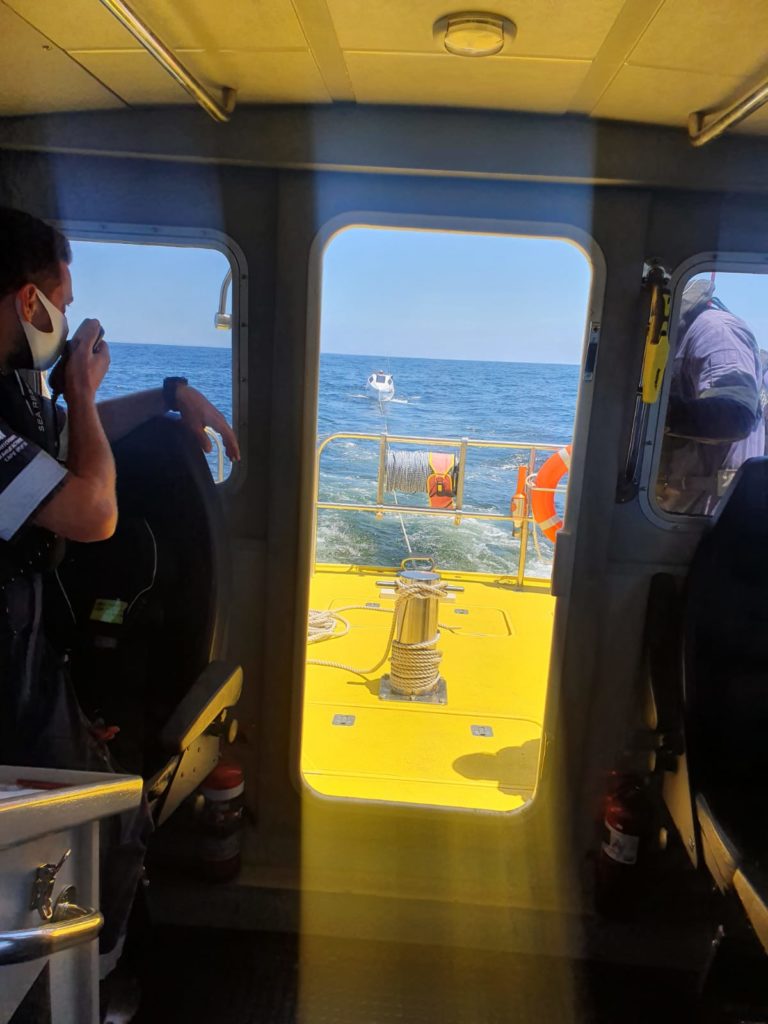 On Saturday evening NSRI Bakoven and NSRI Table Bay were alerted by the SA Police Services of a man believed to be aged in his early 20's suspected to be missing in the surf at Camps Bay Beach.Police had searched the area after friends reported the man missing and they told Police that they had suspected that he may be missing in the surf after he had gone for a swim which was the last time his friends had seen him.On Sunday morning a search by both NSRI Bakoven and NSRI Table Bay was getting underway when it was confirmed that Police had found the man safe at home and it appears that he had come out the water on Saturday evening after going for a swim and he left to go home without informing his friends.On Sunday morning, at 08h46, NSRI Table Bay duty crew launched the sea rescue craft Spirit of Day after a man on the shoreline activated his NSRI RSA SafeTrx emergency sequence in an effort to alert NSRI of a paddler appearing to be in difficulty off-shore of Sea Point.The paddler had fallen out of his craft and appeared to be unable to re-board the craft.NSRI Table Bay crew responded to the shore side to investigate.It appears that a fellow paddler had helped the casualty to re-board his craft off-shore and the local casualty man paddled to Three Anchor Bay slip-way arriving on the shore at the same time that NSRI craft arrived on the scene and he required no further assistance.KNYSNAAt 13h15, Sunday, 06 December, NSRI Knysna duty crew were activated to assist a mother and her daughter, from Pretoria, who had launched on a canoe to paddle up the Goukamma River.It appears that when they turned around to paddle back down the river their progress was hampered by strong winds and they requested assistance.NSRI Knysna duty crew towed the NSRI rescue craft Katharine which was launched on the river at the Goukamma Nature Camp and NSRI rendezvoused with the mother and daughter about 2 kilometers upstream of the camp.They were taken onboard the rescue craft and their canoe was towed and they were brought to the site they had launched from and they required no further assistance.PORT ELIZABETH:At 05h47, Saturday, 5 December, NSRI Port Elizabeth duty crew launched the sea rescue craft Spirit of Toft and JLT Rescuer following a request for assistance from the crew of a Catamaran yacht reporting engine and rudder failure South of Port Elizabeth.On arrival on the scene the yacht was initially taken under tow by the sea rescue craft JLT Rescuer and they were towed towards the Port of Port Elizabeth and at Cape Recife the towline was transferred to the sea rescue craft Spirit of Toft the yacht was towed into Port without incident and berthed and no further assistance was required.NSRI and MRCC (Maritime Rescue Coordination Centre), assisted by Telkom Maritime Radio Services, had been tracking the progress of the solo sailor since Thursday after he reported rudder failure deep sea off the Eastern Cape coastline.The South African solo sailor, sailing from Uruguay to Richards Bay, drifted Eastwards after suffering rudder failure and on reaching 25 nautical miles South of Cape Recife NSRI Port Elizabeth duty crew were activated to go to his assistance.JEFFREYS BAY:On Saturday, 05 December, at 13h13, NSRI Jeffreys Bay duty crew responded to Gamtoos River Mouth following reports of 3 men rescued by a Good Samaritan fisherman after their boat capsized.It appears that 3 local men on a 5 meter ski-boat capsized at around 09h00 but they were stranded on the Western Bank of the Gamtoos River Mouth with no means of communication.They swam across the river to seek help, stopping along the way to rest on a sand bank, where they were noticed by a fisherman who diverted his fishing craft to the men on the sandbank and he rescued them and brought them to shore safely and raised the alarm.On NSRI's arrival on the scene the 3 local men were found safe on the beach and they were transported in the NSRI Jeffreys Bay rescue vehicle to Kabeljous Beach.Their boat was recovered and they required no further assistance.NSRI commend the Good Samaritan fisherman who went to their aid.
Share

Strand – Thursday, 10 December. A child remains in a critical condition and a teenager is missing: