Pink Rescue Buoy used to save a life

NSRI’s Pink Rescue Buoy initiative has grown exponentially since its introduction in November 2017. To date more than 750 Pink Rescue Buoys have been installed around South Africa and 59 lives have been saved by their use. The buoys have proved to be effective flotation devices for people in difficulty in the water, until professional help arrives. Here, we share a recent good-news story, and urge members of the public to take care of these buoys as essential lifesaving devices.In the afternoon of 25 August, Station 23 (Wilderness) was alerted to a teenager being swept out to sea at Herolds Bay. Wilderness crew and rescue swimmers, along with the SAPS, and ambulance services responded to the call-out. On arrival, they found a local life guard, Tristin de Swardt, assisting the youngster onto the beach. After being assessed by medics and a doctor who happened to be on the beach at the time, he was taken to hospital for observation for non-fatal drowning symptoms.The story that unfolded around the rescue is worth telling, because it illustrates that bystander help, when performed correctly, can save lives. Too often in situations when people get into difficult in the water, bystanders will go in after them to help. It’s human nature, but unless those people are trained lifeguards with flotation devices and swimming aids on hand, multiple drownings can occur.Pink Rescue Buoy to the rescueTristin told the NSRI crew that after he arrived on the beach, he noticed a group of six teenagers getting ready to jump off the rocks into the sea on the eastern side of Herolds Bay. He approached the youngsters and asked if they were competent swimmers as high swells and rip currents were evident. The answered that they were. The first teenager jumped in and was immediately caught in a rip current and swept out to sea.Tristin attempted to swim to the teenager but the currents were too strong and the life guard realised he needed his swimming rescue flippers if he was going to be able to reach the youngster. He swam back to shore to retrieve them from his car, while bystanders raised the alarm with rescue services. When he arrived back at the rocks, he saw that bystanders had taken the Pink Rescue Buoy, housed on a pole nearby, and thrown it out to the distressed youngster who was holding onto it but still caught in the rip.Tristin jumped off the rocks and swam towards him. Once he reached the youngster he was able to calm him down and using the Pink Rescue Buoy and aided by his rescue flippers, was able to swim with the teenager to the middle of the bay until they were free of the rip current. From there, still using the buoy for flotation, Tristin was able to swim the teenager safely to shore. 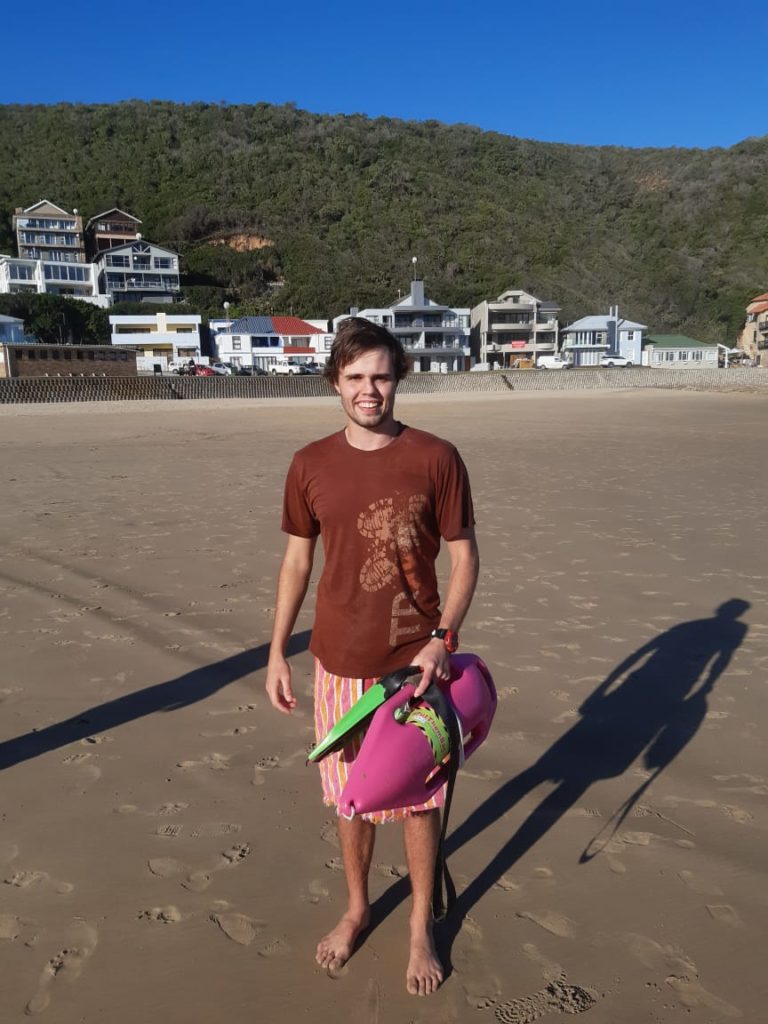 Lifeguard Tristin de Swardt with the NSRI Pink Rescue BuoyPlease take care of these buoys!The NSRI Pink Rescue Buoys are placed at selected inland dams rivers, and beaches along the coastline where there is a danger of people drowning or needing rescue. The project is made possible by corporate and public donations and is part of an extensive National Drowning Prevention Campaign started by Sea Rescue in 2017. The deployment of the Pink Rescue Buoys is done with the cooperation of city councils, municipalities and communities in a rapidly growing effort to make our waters safer and to prevent drowning incidents. Part of the initiative follows the World Health Organisation’s principals of empowering community members with peer rescue and CPR skills. When we put Pink Rescue Buoys up in an area, we target this education at the communities through traditional and social media channels.They are bright pink so that they can be easily spotted on the water by responding rescuers. The pink colour is also unique to NSRI. So if you see a Pink Rescue Buoy anywhere other than on its pole you can be sure that it belongs to Sea Rescue and should be returned to its sign. On each Pink Buoy there is a location number and Sea Rescue’s head office number.#aStolenBuoyIsAstolenLifeThe cost of the Pink Rescue Buoy and the sign is R1 500 and can be purchased here.For more information on this project, you are welcome to contact us on pinkrescuebuoys@searescue.org.za
Share