[video width='848' height='480' mp4='https://www.nsri.org.za/wp-content/uploads/2020/06/VID-20200621-WA0028.mp4'][/video]Garth Dominy, NSRI Wilderness station commander, said:At 10h48, Sunday, 21 June, NSRI Wilderness duty crew were activated following a request for assistance from a group of local hikers reporting one of their hiking party who had gotten himself stuck on a cliff and he needed help.They were on a Herolds Bay shoreline hike East of the Malgas River and West of Herolds Bay.A large crevasse and boulders separated them from the man who had climbed to where they could not reach him and he was unable to go any further and he was unable to return to them from where he was on a cliff.One of their hiking party hiked out of the area to reach a cell phone signal and called NSRI Wilderness to raise the alarm.The sea rescue craft Spirit of Rotary was launched and our NSRI sea rescue vehicle towed the sea rescue craft Clemengold Rescuer which was launched at Herolds Bay.WC Government Health EMS rescue were activated and the EMS/AMS Skymed rescue helicopter was placed on alert.On our sea rescue craft arriving on the scene, in an incoming tide, an NSRI rescue swimmer was deployed into the surf from our sea rescue craft and he swam ashore and he was able to hike and climb to the man and on reaching the casualty found him to be cold, tired and anxious.An EMS rescue commander was transported to the scene onboard one of our sea rescue craft to evaluate rescue extrication options and with the incoming high tide, with sea conditions and swells rising, EMS made the decision to extricate the man by helicopter.The EMS/AMS Skymed rescue helicopter was activated and NSRI dispatched a second NSRI rescue swimmer who swam through the surf to the shore carrying blankets and supplies.Our second rescue swimmer reached the scene and the supplies and equipment were used to make the man more comfortable and warm him up until he could be extricated.On the Skymed helicopter arriving on the scene an EMS rescue technician was hoisted from the helicopter to join the 2 NSRI rescue swimmers who were with the casualty.The casualty, a local 65 year old man, was secured into a harness and he was hoisted with the EMS rescue technician into the helicopter and airlifted to a landing zone that we had established at the nearby old George shooting range.Once he was safe and out of danger and reunited with his fellow hikers no further assistance was required.The helicopter returned to the scene to collect the 2 NSRI rescue swimmers who were hoisted into the helicopter and they were airlifted to the landing zone.The operation completed at 14h34.NSRI commend the cooperation between the emergency services that contributed to the successful outcome in this rescue operation. 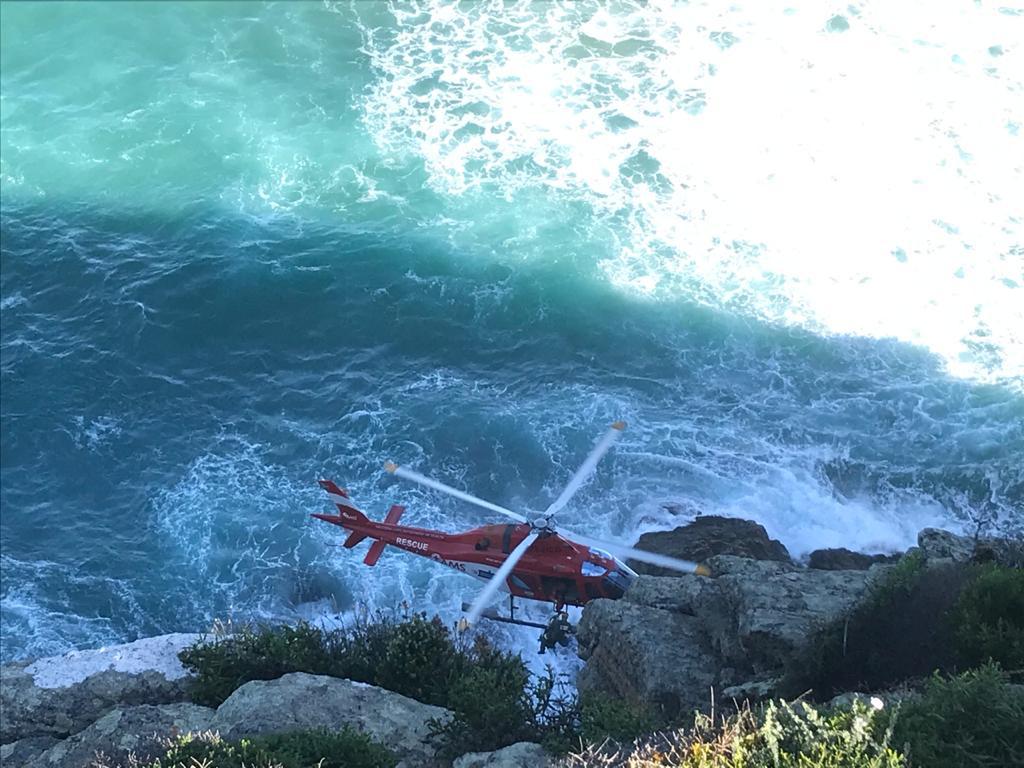