At 10h17, Tuesday, 18th February, SA Whale Disentanglement Network (SAWDN) volunteers were activated to reports from fishermen of a whale entangled in fishing rope lines and floatation buoys in the vicinity of Dassen Island on the West Coast.An NSRI Yzerfontein sea rescue craft, Rotary Onwards, was launched carrying SAWDN volunteers and on arriving in the vicinity following an extensive search an 11 meter Humpback whale was located and found to have a wrap of fishing rope around the right flipper and that rope ran over the tail, and 4 wraps of fishing rope around the caudal peduncle and 4 wraps of fishing rope around the flukesThe wraps of fishing rope were attached to multiple floatation buoys and 2 fishing lines anchored the whale to the seabed.The whale appeared to be stressed and was very active and diving beneath the sea surface regularly in what appeared to be an effort to avoid the rescuers.A kegging buoy was attached to the fishing rope on the whale to slow down movement of the whale.Additional SAWDN volunteers responded from Cape Town and Melkbosstrand and the NSRI Yzerfontein sea rescue craft Sonja was launched carrying the additional SAWDN volunteers to join the operation.On arrival on the scene the kegging buoy was shifted to the tail of the whale to aid in keeping the whale above water. The whale continued to dive under water but the kegging buoy assisted to reduce the time the whale remained under water aiding the SAWDN crew to have greater opportunities and more time to cut fishing line off the whale.Cutting of the fishing line commenced, using the SAWDN specialised cutting equipment, and the flipper rope lines on each side were cut and the wraps of rope on the 4 ropes on the caudal peduncle and 4 ropes on the flukes were released in a total of 10 cuts despite the whale remaining very active throughout.SAWDN borrowed a grappling iron from a nearby fishing boat and the grappling iron was used to prevent the loss of the bulk of line holding the buoys at the Caudal Peduncle and flukes and those wraps of fishing rope and floatation buoys were recovered for disposal with the help of the grappling iron.The cutting operation lasted 1 and a half hours and the Sea Rescue craft were recovered at NSRI Yzerfontein rescue base at 16h45.Once freed from the entanglement the whale appeared to be healthy with strong movement and SAWDN are confident of the whales survival.The South African Whale Disentanglement Network (SAWDN) was established in 2006 in order to manage entangled whales using specialized equipment and is comprised of trained volunteers from the - National Sea Rescue Institute, Telkom Maritime Radio Services, KwaZulu-Natal Sharks Board, Department of Environment Forestry and Fisheries, Centre for Sustainable Oceans at the Cape Peninsula University of Technology, Cape Nature, Mammal Research Institute, South African National Parks, South African Police Service, Cape Nature, Bayworld, various Boat Based Whale Watching and Shark Cage Diving Operators, the Rock Lobster Industry and the Octopus Industry and fully supported by the Dolphin Action and Protection Group.SAWDN COVERS THE ENTIRE SA COASTLINEWhales assisted to date: 198 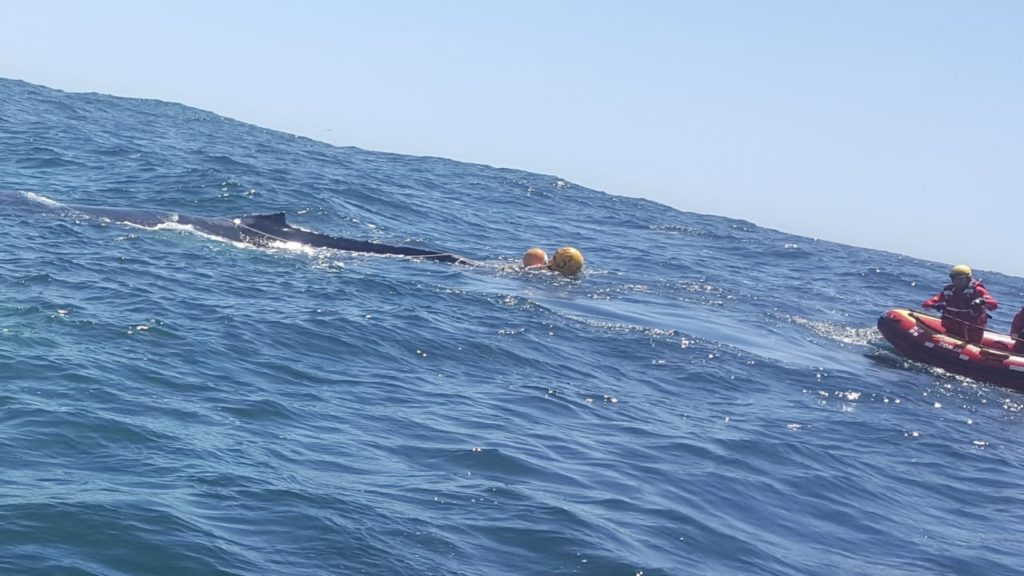