HEROLDS BAY:Garth Dominy, NSRI Wilderness station commander, said:At 16h03, Friday, 14th February, NSRI Wilderness duty crew were activated following eye-witness reports of a drowning in progress at Herolds Bay near to George.A male family member of a female who was being swept out to sea had taken the NSRI Pink Rescue Buoy off its stand at the beach and instructed other bystanders to call NSRI and raise the alarm from the emergency information provided on the NSRI Pink Rescue Buoy pole and signage while the man, armed with the pink rescue buoy, ran along rocks to attempt to reach his family member, a 21 year old female, who while swimming was caught in rip currents and was being swept out to sea.The man had earlier swum out into the surf to attempt to assist her but turned around and swam back to shore after he was not able to help because of rough sea conditions that threatened his own life.NSRI rescue swimmers responded to the scene while our NSRI duty crew responded in our sea rescue vehicle and our sea rescue craft Oscars Rescuer was towed to the scene to be launched on scene. WC Government Health EMS and ER24 ambulance services responded.An unidentified surfer reached the female and placed the casualty female on his surfboard in the surfline and an NSRI rescue swimmer who had entered the water to assist reached them in the surfline and together the surfer and the NSRI rescue swimmer were able to get her to the shore safely.The female was treated on the scene for hypothermia and non-fatal drowning symptoms by ER24 paramedics and required no further assistance following treatment.The unidentified surfer who assisted is highly commended for his actions that contributed to saving the life of the 21 year old female and bystanders who raised the alarm are commended for their contribution.Follow-up: Gwaing River Mouth:NSRI can confirm that in a joint operation on Friday morning NSRI Wilderness, Police divers, Fire and Rescue Services rescue divers and the EMS/AMS Skymed rescue helicopter recovered, pending formal identification, the body of a 58 year old man who had gone missing on Thursday at the Gwaing River Mouth after falling from rocks into the sea while fishing with a friend.Police have opened an inquest docket and the body of the man was taken into the care of Government Health Forensic Pathology Services.Condolences are conveyed to family and friends of the deceased man. 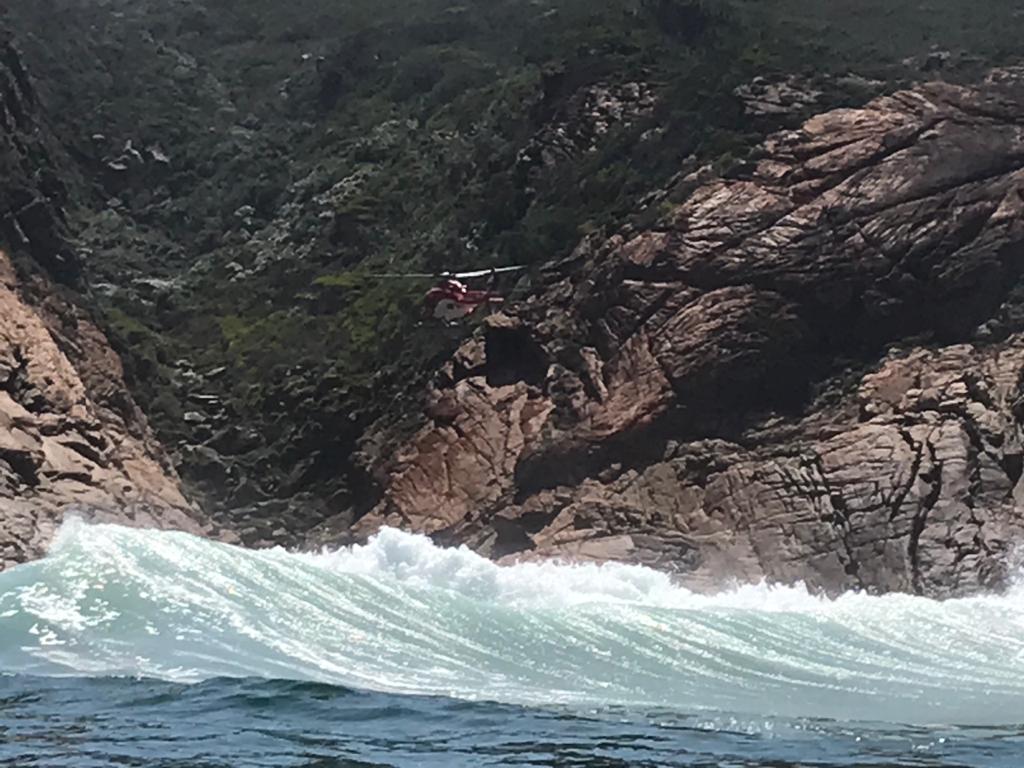 EMS/AMS SKYMED RESCUE HELICOPTER assisting NSRI WILDERNESS, POLICE DIVERS and FIRE AND RESCUE SERVICES RESCUE DIVERS on Friday morning in the recovery of the body of a 58 year old Pacaltsdorp man who went missing in the surf on Thursday after falling off rocks into the sea at Gwaing River Mouth. Condolences are conveyed to family and friends of the deceased man.
TO REPORT A SEA RESCUE EMERGENCY DIAL 112 FROM A CELLPHONE
Share