Lodewyk van Rensburg, NSRI Oyster Bay station commander, said:At 13h20, Monday, 13th January, NSRI Oyster Bay duty crew were activated to investigate eye-witness reports, from an NSRI coast watcher, of children launching into the surf with the NSRI Pink Rescue Buoy that is stationed at that beach and the reasons for them launching into the surf with the pink rescue buoy were unknown.I was already nearby to the scene at the time and on arriving at Oyster Bay Main Beach I established that a group of 7 local males (3 teenagers, 3 children, and an adult, their uncle) had been caught in rip currents while swimming.The uncle, the 3 children and 1 of the teenagers were not too deep when they were caught in the rip current and they managed to escape the rip current and get safely out the water but 2 of the teenagers, both aged 14, were swept out to sea.The uncle, Ricardo Kettledas, instructed the children to go and grab the pink buoy for him and he launched into the surf with the pink buoy and was able to rescue one of the teenagers to shore and that teenager was showing signs of non-fatal drowning symptoms and he was unconscious.When I arrived on the scene I placed that teenager in the recovery position and I was informed of one teenager still missing in the surf.Knowing that additional sea rescue crew were almost arriving I left the teenager in the recovery position in the care of the other boys while myself and Ricardo launched into the surf and at the backline we were able to reach the remaining teenager who was lifeless in the water, Ricardo still had the pink rescue buoy with him, and assisted by the pink rescue buoy we brought the teenager to shore and once on the shore I commenced CPR (Cardio Pulmonary Resuscitation) efforts on the boy who was not breathing and he had no pulse.Private Care ambulance services had already been activated and our NSRI duty crew were arriving on the scene.A pulse and spontaneous breathing was restored to the teenager during CPR efforts and the teenager was taken into the care of paramedics on their arrival and he was transported to hospital in a critical condition by Private Care ambulance.The first teenager who was rescued by Ricardo was also transported to hospital in a serious condition by ambulance and he is recovering.It has been confirmed that the second teenager remains in ICU and he remains in a serious condition in hospital after he was transferred to a Port Elizabeth hospital.NSRI commend Ricardo Kettledas, 29, for his assistance.NSRI:Two lives were saved today thanks to a local Oyster Bay man, Ricardo Kettledas, NSRI station commander Lodewyk van Rensburg and the NSRI pink rescue buoy number 36-2, sponsored by REEF.This brings the total to 56, the number of successful rescues that NSRI are aware of that have been assisted by the NSRI pink rescue buoys stationed at beaches around the South African coastline in cooperation with most Municipalities.TO REPORT A SEA RESCUE EMERGENCY DIAL 112 FROM A CELLPHONE 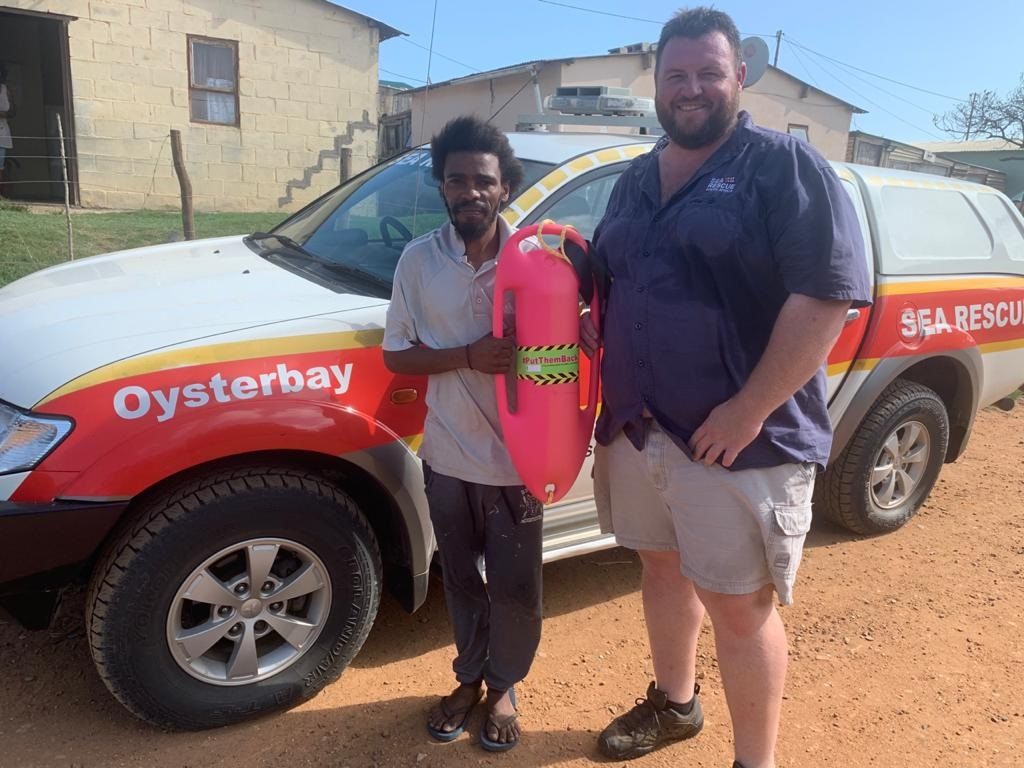 Ricardo Kettledas, a 29 year old local man from Oyster Bay that used our Pink Rescue Buoy, 36-2, Sponsored by Reef, to help save the two teenagers. Photographed here with Lodewyk van Rensburg, NSRI Oyster Bay station commander, who swam out to sea with Ricardo and assisted in the rescue of the second teenager.
Share