SEA RESCUE – Southern Cape – Sunday, 09 June. 2 British men caught in rip currents - Victoria Bay. Man injured on hiking trail assisted by NSRI - Robberg Nature Reserve: VICTORIA BAY:Mike Vonk, NSRI deputy station commander, said:At 16h45, Sunday, 09 June, 2 NSRI Wilderness off duty trainee crew members were swimming at Victoria Bay when they were alerted to 2 males aged in their early 20's caught in rip currents on the Eastern side of Victoria Bay, near to George.One had managed to reach rocks and was in relative safety but exhausted with minor injuries and his friend, who had gone into the water to try to assist him, was swept towards the rocks and exhausted and in distress.One of the NSRI trainee crewmen swam out to the man in distress and was able to swim him away from the rocks, keeping him afloat and he swam him to the beach.Local surfers and the second NSRI trainee crewman assisted them out of the water.The alarm was raised requesting medical assistance and an NSRI Wilderness duty medic and ER24 ambulance services responded to the scene where the young men, British and Irish citizens, were treated by the NSRI medic and ER24 paramedics, one for non-fatal drowning symptoms and one for scratches and bruises sustained from the rocks.The were both transported to hospital by ER24 ambulance in stable conditions and we can confirm that both men, on a sporting exchange program, have been released from hospital following treatment.We commend all who assisted in the incident.PLETTENBERG BAY:Marc Rodgers, NSRI Plettenberg Bay station commander, said:At 17h52, Sunday, 09 June, NSRI Plettenberg Bay duty crew were activated following a request for assistance from a family from Humansdorp hiking on the Robberg Nature Reserve trail reporting the father to be suffering exhaustion.Our sea rescue craft Leonard Smith and Ray Farnham were launched while Cape Nature rangers and an NSRI shore crew responded to the car park to hike to the location.On arrival on the scene the father, accompanied by his wife and his 2 daughters, was treated for exhaustion and he was secured to a Stokes basket stretcher and hiked to our sea rescue craft beached at The Island.The man and his wife were transported aboard our sea rescue craft to our sea rescue station and the 2 daughters were hiked out of the trail to the car park and they drove our sea rescuye base where they collected their parents and no further assistance was required. 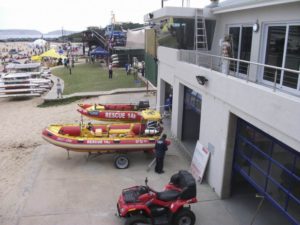