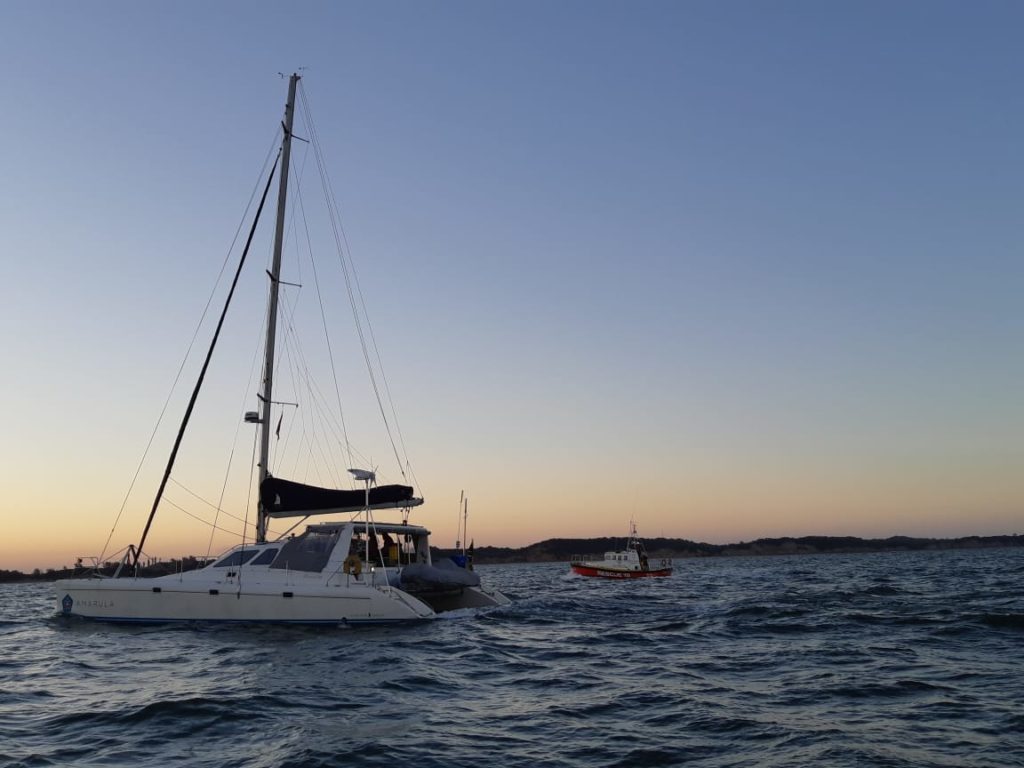 RICHARDS BAY:Jacques Kruger, NSRI Richards Bay duty coxswain, said:At 09h23, Friday, 10th May, NSRI Richards Bay duty crew were placed on alert following a distress call from a Catamaran yacht, with 5 crew onboard, 3 males and 2 females, sailing from Richards Bay to Madagascar, 150 nautical miles from Richards Bay, reporting to be taking water from unknown causes.They confirmed that they had turned around, heading back towards Richards Bay, they were under motor power and water pumps were maintaining against an ingress of water but they could not identify the cause of the water intake.Fearing that rough sea conditions may cause a sudden change for the worse NSRI Richards Bay duty crew prepared to launch our sea rescue craft Spirit of Richards Bay, NSRI St Lucia were placed on alert and NSRI Durban helicopter rescue swimmers were placed on alert and MRCC (Maritime Rescue Coordination Centre) confirmed that an 15 Squadron SA Air Force Oryx helicopter would be available from Durban if required.The situation was monitored and after it appeared that the Catamaran was maintaining under the circumstances NSRI instructed the yacht to send a VHF Marine Radio Pan-Pan urgency message to assist with communications. A ship at sea in the vicinity reacted to the Pan-Pan which was relayed to Telkom Maritime Radio Services and confirmed that the crew of the Catamaran would continue under motor power and provide a situation report every 3 hours by satellite phone and failing to give a situation report attempts would be made on VHF Marine Radio and if necessary by relay.Sea Rescue Richards Bay, St Lucia and Durban remained on high alert.At 01h26, Saturday, 11th May, it was confirmed that the Catamaran continued without any changes and by first light on Saturday morning, in improving sea conditions, the crew identified a hole in the hull and repairs were underway and although still taking water they were maintaining and had reduced water intake.Sea conditions during Saturday improved tremendously and the crew of the Catamaran confirmed the hole, the size of a R5 coin, may be suspected to have been caused by bumping into a solid object afloat, possibly during Thursday night. Temporary repairs continued to be conducted at sea reducing the intake of water and NSRI remained on alert and in contact with the casualty crew although at ease that they were out of any imminent danger or threat.TNPA (Transnet National Ports Authority) arranged a berth for them at Zululand Yacht Club.On Saturday afternoon our NSRI sea rescue craft Spirit of Rotary East London and Spirit of Richards Bay, on routine training with crew onboard from NSRI Ballito, rendezvoused with the casualty Catamaran 5 nautical miles off-shore and they motored to the Zululand Yacht Club escorted by NSRI and berthed and could finally get some well deserved rest.NSRI stood down.NSRI commend Telkom Maritime Radio Services for their assistance with communication and their liaison with NSRI throughout the operational stand-by.NSRI commend the skipper and crew of the casualty Catamaran for taking all necessary precautions and alerting rescue authorities immediately.CAPE POINT:Darren Zimmerman, NSRI Simon's Town station commander, said: 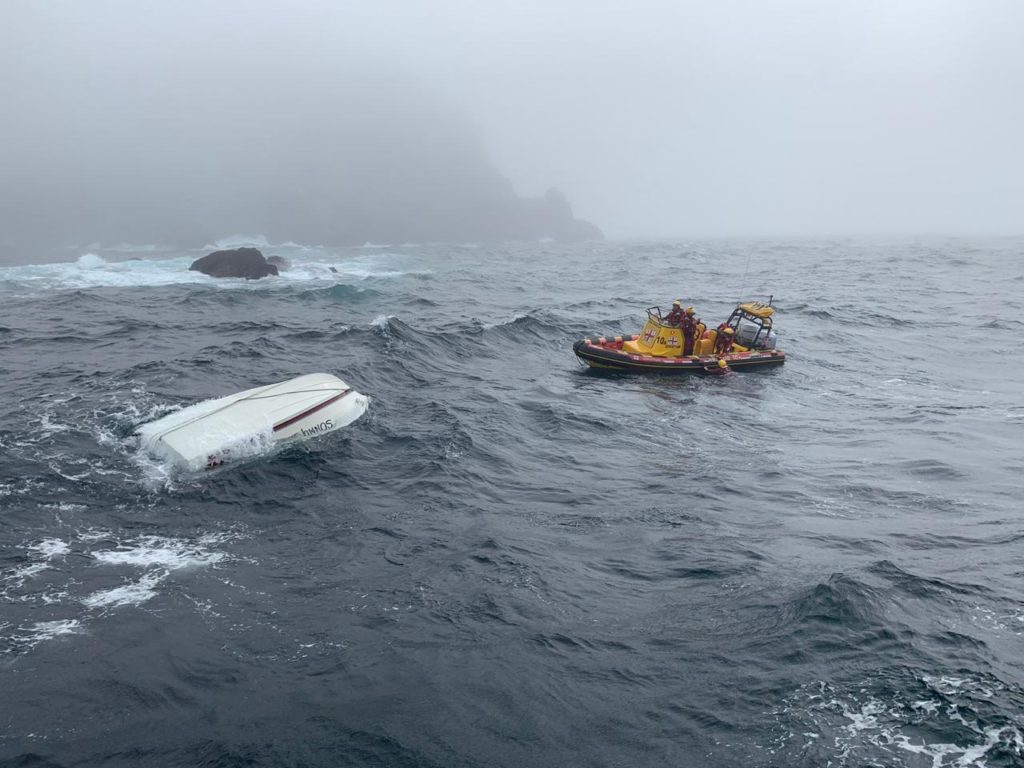 At 09h15, Saturday, 11th May, NSRI Simon's Town duty crew were activated following an urgent appeal for assistance from the private boat Ocean Life whose crew reported coming across 2 men clinging onto the upturned hull of a capsized ski-boat off-shore of Cape Point.Our sea rescue craft Spirit of Safmarine III and Spirit of Surfski II were launched and our NSRI rescue vehicle responded to Cape point. CMR (Cape Medical Response) were activated to respond to our sea rescue base to stand-by. WC Government Health EMS were placed on alert.Skiboat Mobile and Telkom Maritime Radio Services assisted with Marine VHF communications.The crew of Ocean Life confirmed that both casualties of the capsized craft were accounted for and rescued onto Ocean Life and crew of Ocean Life had initiated treatment to the 2 men for hypothermia and for shock.On NSRI arriving on the scene both patients were transferred onto a sea rescue craft and transported to shore where they were treated by NSRI and CMR (Cape Medical Response) paramedics and following treatment for hypothermia and shock no further assistance was required.Telkom Maritime Radio Services broadcast an all ships alert warning of the Navigational Hazard of the capsized ski-boat adrift in dense fog off-shore of Cape Point.Our sea rescue craft returned to the scene and we located the capsized boat which we took under tow and righted and towed the boat to Millers Point slipway where she was recovered.The navigational warning was cancelled by Telkom Maritime Radio Services.NSRI commend the crew of Ocean Life for the rescue effort and for raising the alarm.NSRI commend Skiboat Mobile and Telkom Maritime Radio Services for their assistance with communications.It appears that the casualty boat capsized after a rope may have fouled the boats motor propellors. The 2 casualties, local men, had been in the water for 10 minutes before being rescued by Ocean Life who just happened to come across them. 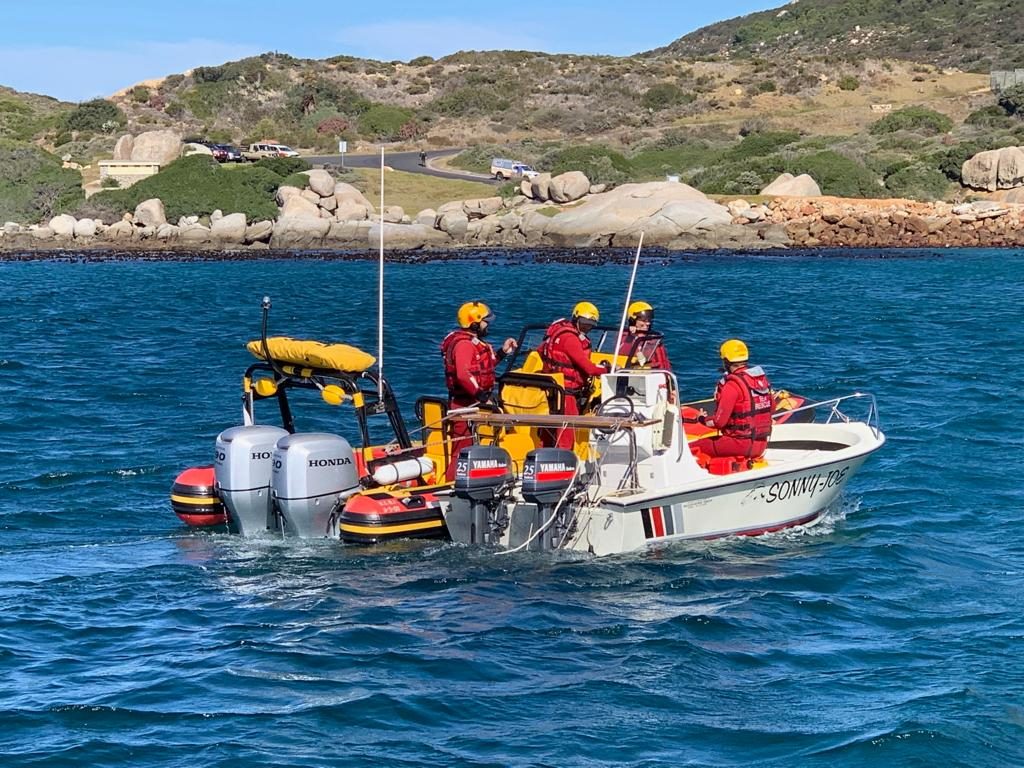 Casualty capsized boat righted being brought into millers point by NSRI Simon's TownJEFFREYS BAY:Ernie Schmidt, NSRI Jeffreys Bay duty controller, said:At 15h15, Saturday, 11th May, NSRI Jeffreys Bay duty crew were activated following reports of a female injured while dune riding at Aston Bay.Our sea rescue vehicle with NSRI medics responded to the scene and Private Care ambulance services were activated.On arrival on the scene we found the patient, a German tourist, age 22, suffering a blunt trauma head injury sustained when she fell off a body board while riding down a sand dune and bumping her head.Paramedics evaluated the patient medically and found her to be fit and not requiring hospital treatment.Advice was given to her to seek medical attention if she felt dizzy or developed headaches and no further assistance was required after we gave them details to call if required. 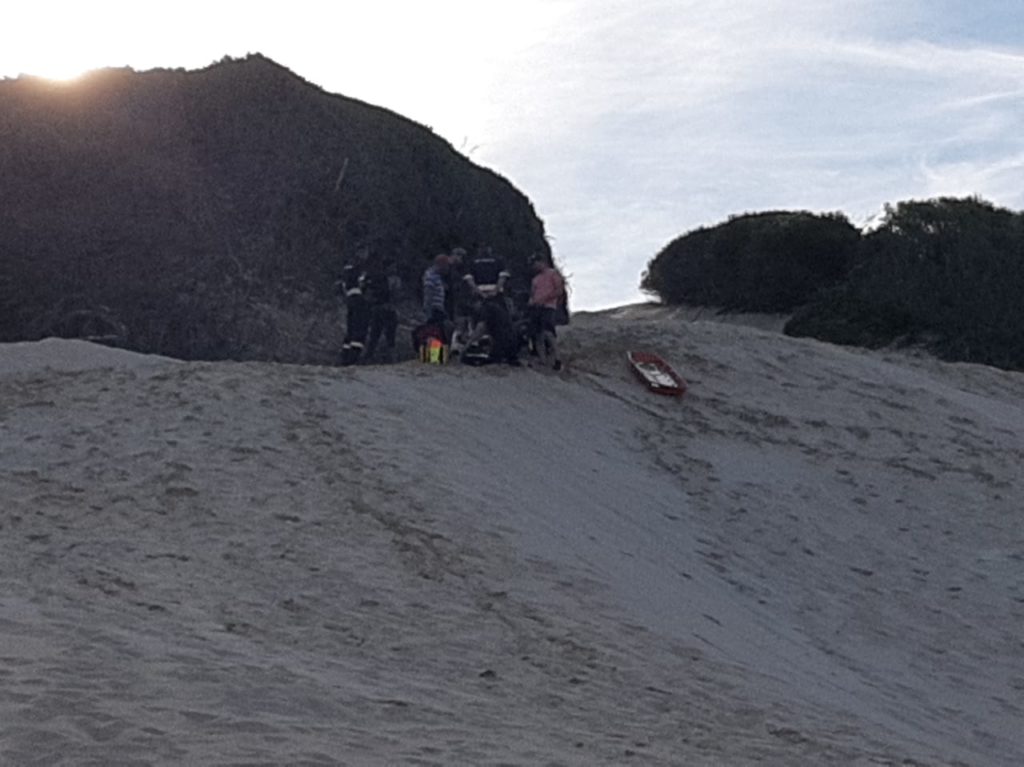 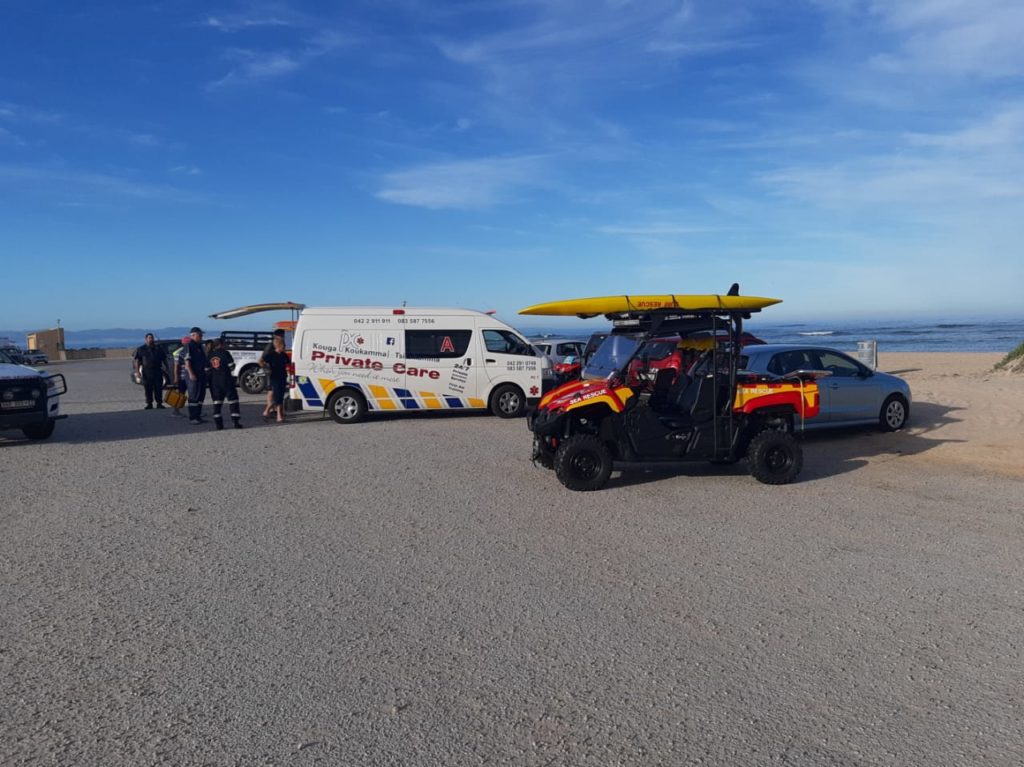 KOMMETJIE:Ian Klopper, NSRI Kommetjie station commander, said:At 13h39, Sunday, 12th May, NSRI Kommetjie duty crew and CMR (Cape Medical Response) were activated following reports of CPR (Cardio Pulmonary Resuscitation) efforts being conducted on a local 58 year old male surfer who had collapsed unconscious suffering a suspected heart attack while surfing and the time at the backline breakers at Long Beach, Kommetjie on his surfboard.He had been rescued by fellow surfers and brought to shore and the alarm was raised while bystanders and a surfer who is reportedly a paramedic had initiated CPR.Our sea rescue vehicle responded and on arrival on the scene we found good bystander CPR being conducted on the patient and our AED (Automated External Defibrillator) was used.WC Government Health EMS were placed on alert and both the AMS/EMS Skymed rescue helicopter and the Netcare 911 helicopter were placed on alert.NSRI medics were joined on the scene by CMR paramedics and advanced life support treatment was provided and extensive CPR efforts were successful.The patient has been transported to hospital by CMR ambulance in a critical condition.NSRI commend the surfers who rescued the man from the sea and the surfers and bystanders who assisted on the scene.TO REPORT A SEA RESCUE EMERGENCY DIAL 112 FROM A CELLPHONE
Share