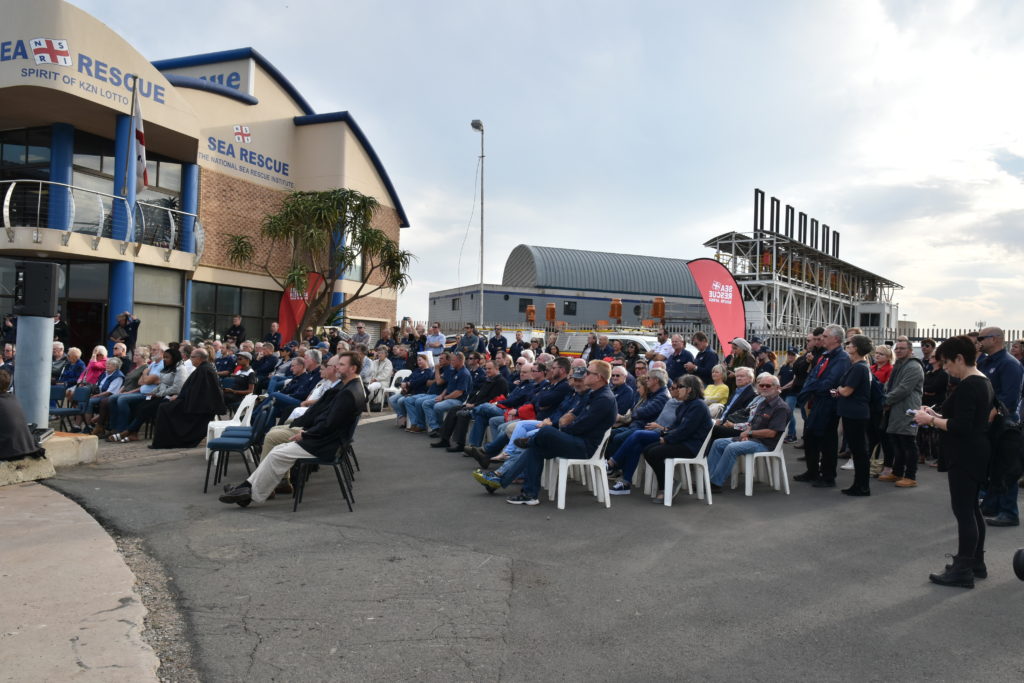 The celebrations started with NSRI Station 5 Durban Station Commander Andre Fletcher welcoming all the guests to this very special event. 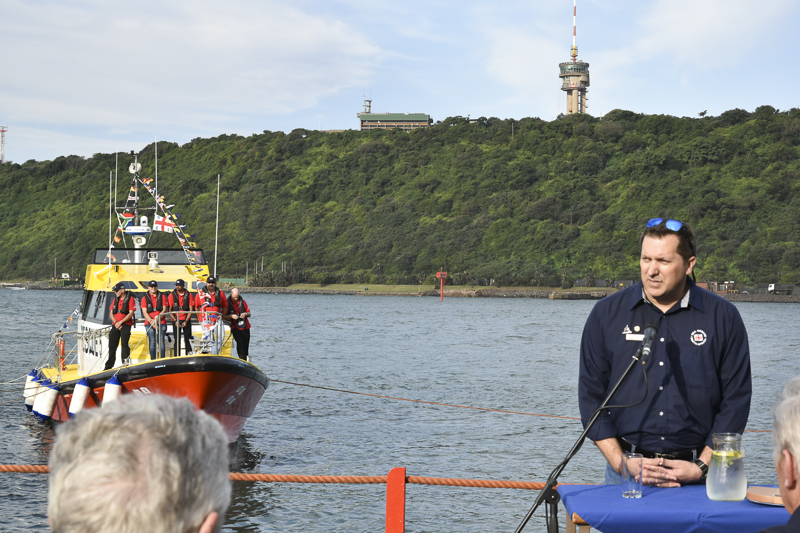 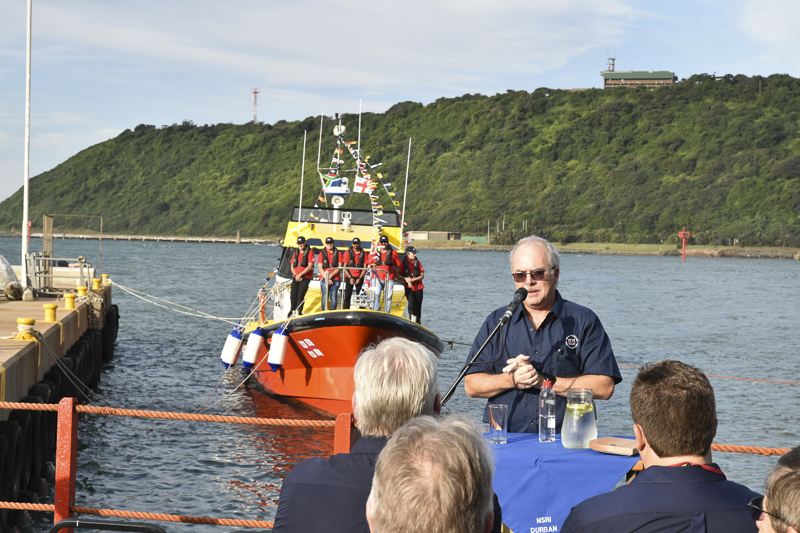 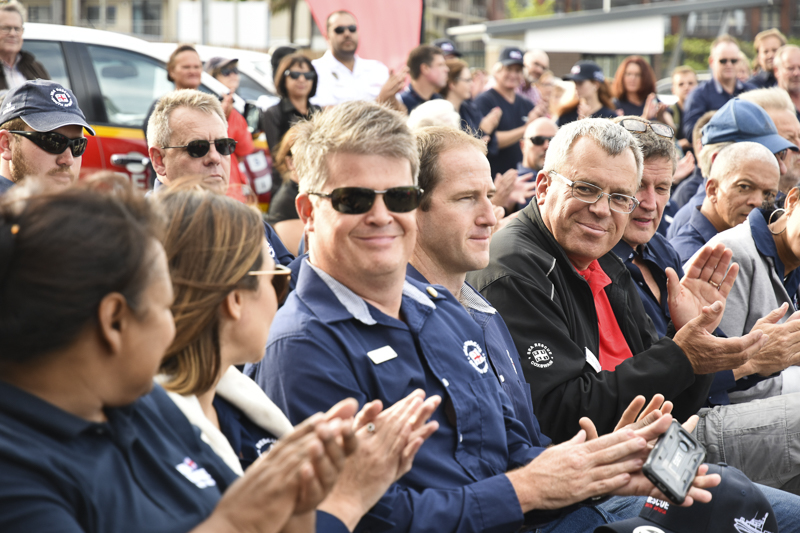 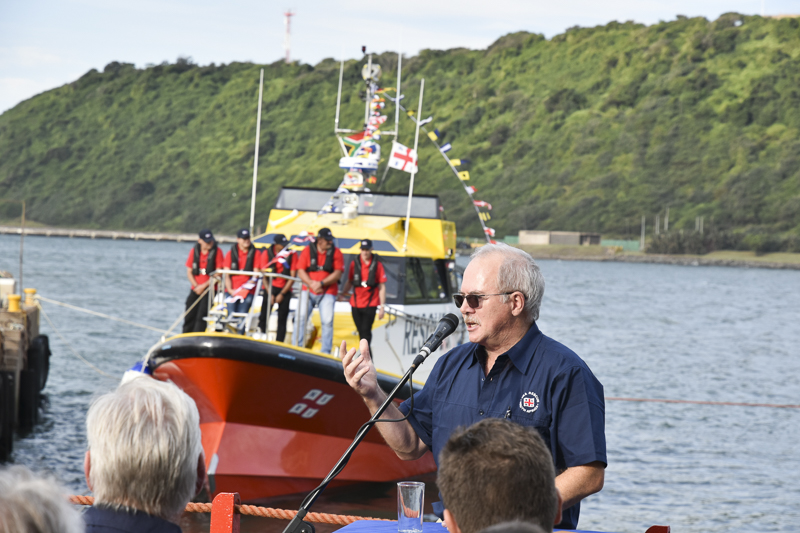 'The ORC 140 design by Pantocarene Naval architects, which is owned by Didier Marchand came up with the idea for this type of vessel some 20 years ago that would operate in rough sea conditions and over the years the design has been improved to produce the current ORC 140 for NSRI. Numerous Pilot vessels and SAR vessels have been built to this design and in operation.The French Sea Rescue Service the SNSM have 30 ORC 140’s in service with some 16m versions as well, the designs are from 8m to 26m and have been built in various countries in Europe and Australia.Chantiers Navals Bernard SA are the ship yards that have been building ORC’s for the SNSM and various Pilot operations in Europe. They have all the necessary experience in building this particular type of design and have an excellent track record. Based on this we contracted them to build the Alick Rennie for NSRI. The proof is that on her maiden voyage from Cape Town to Durban some 945 nautical miles the vessel performed exceptionally well in varied sea conditions and has for filled all our operational requirements.The Alick Rennie is a exceptional Search and Rescue (SAR) vessel that will meet NSRI’s operational needs for the next 40 years, that is her intended operational life span, says Mark Hughes - Operations Director' 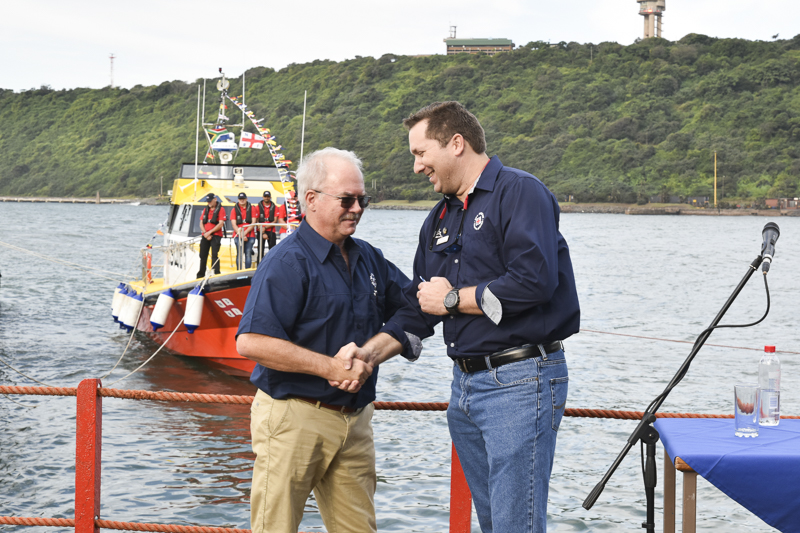 Mark Hughes hands over the key to the Alick Rennie to Station Commander, Andre Fletcher 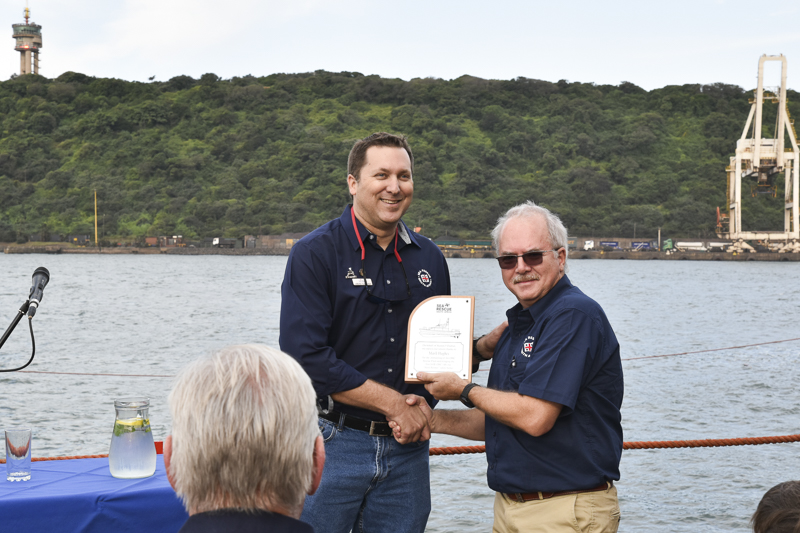 Mark Hughes receives an award by Station 5 Crew to say thank you for his involvement in the ORC projectDr Cleeve Robertson, CEO of NSRI welcomed the Rennie Family and thanked the Rennie Family Trust, principle sponsor of the Alick Rennie rescue craft and all our donors who are making it possible to fund these rescue boats.Dr Robertson emphasised the importance that NSRI undertakes to providing our 1261 volunteer sea rescue crew around the country with state-of-the-art assets, resources and equipment to fulfilling our mission to saving lives on South African waters and this state-of-the-art sea rescue craft is testament to the effort and a commitment by our management, our volunteers and our donors alike.Below is a short outline of the Rennie family history: 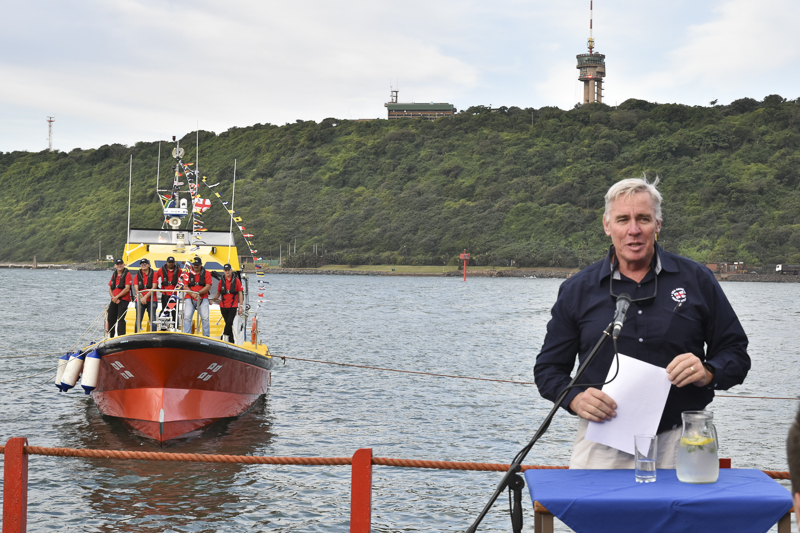 John Thomson Rennie (1824-1878) business called John T Rennie and sons.Business connection to Durban started with getting the Mail Contract for Cape Town to Durban for 5 years. 1857-1862 They went on to run Passenger Clippers from Durban to United Kingdom from 1858-1912 Ships were sold in 1912 and Rennie's became a Shipping Agency and popular travel agency. Rennie's directors sat on the Durban Harbour Board and were involved in the deepening of the harbour entry as well as the removal of the sand bar and establishment of a signal station. This improvement of the harbour brought life to Natal.Alexander John Rennie known as Alick or AJ. 1895-1959Alick was the son of David Rennie (6th son of John T Rennie and Isabella Abernethy) and Isabella née Ross. Alicks father David worked in the Rennie's London office and lived in Forest Hill. Alick attended Dulwich College for his schooling. 1914 - Alick joined the Gordon Highlander's and reached the rank of Captain. He fought in France and was severely injured in the assault of Y Ravine at Beaumont Hamel. After leaving the army Alick joined the family firm JT Rennie and sons. In 1926 he married Margaret Cecil King (Peggy Rennie). They had 2 children. Ian 1927 and Jennifer 1931 - Alick worked in both the London and Durban office. 1938 - The family settled in Devon England. Bought Old Mill Cottage and planned to send Ian to English Public school. 1939 - With the outbreak of WW2 Peggy and the children were evacuated to Durban. Alick remained in Britain and ran the London Office of JT Rennie and sons throughout the war. He lived in Chorleywood, Hertfordshire and served in the Home Guard as well as Fire Watch in London. His health was not good and Mrs Rennie returned to the U.K on a passage on a naval ship. The children remained in South Africa.After the war Alick and Peggy bought a house in Kloof (near Durban). Alick worked in the Durban Office as the Senior Family director until his health deteriorated. Alick interests were the family and the firm. He loved Scotland and had many family holidays there. His health was affected by 1914 war wounds.Alick his Grandfather, Uncles and cousins will be honored that their connection to The Port of Durban is remembered by the naming of the new Sea Rescue craft Alick Rennie. 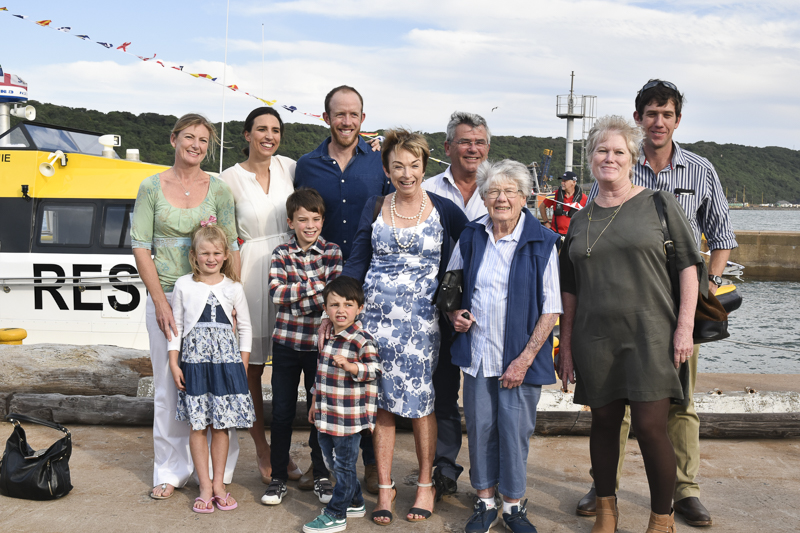 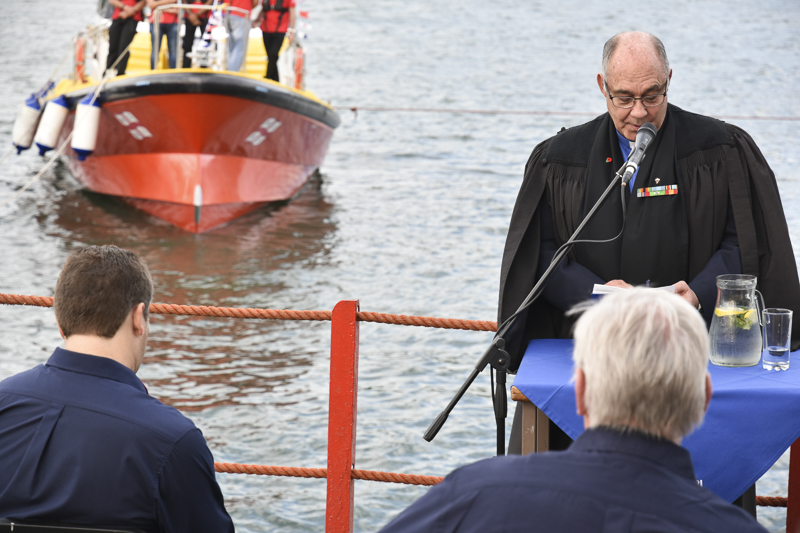 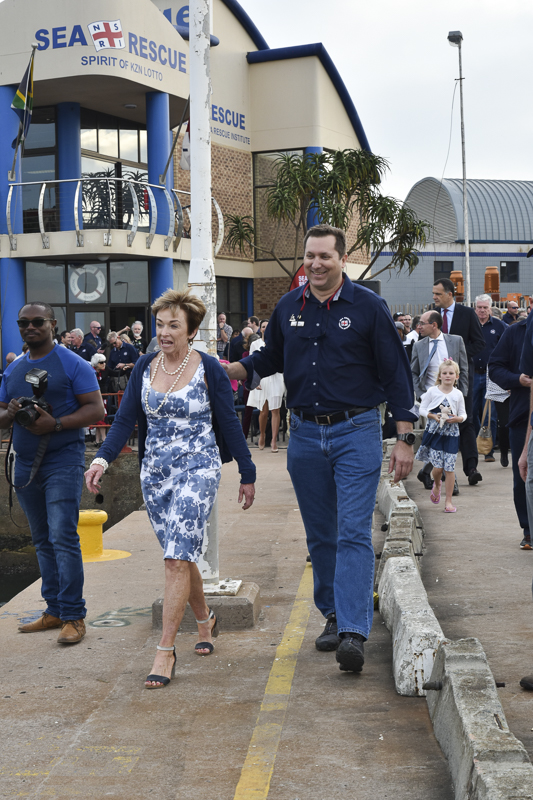 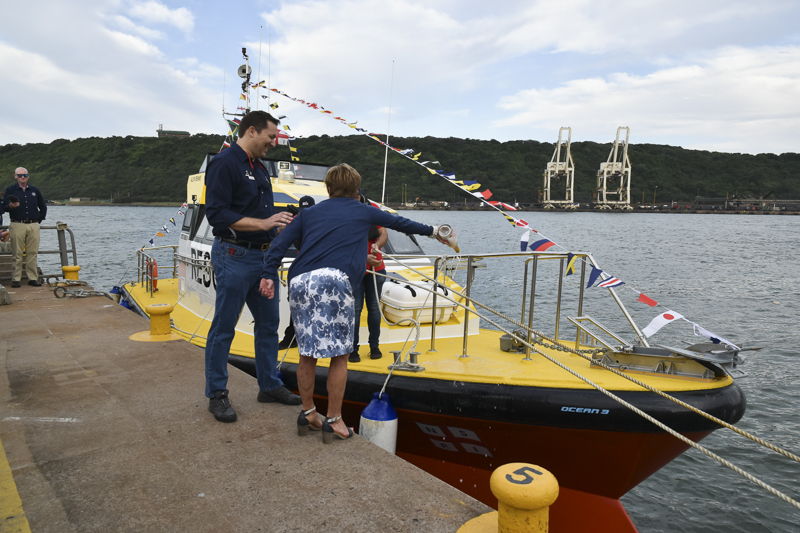 Margie Firth, representing the Rennie family, poured champagne over the bow and named her the Alick Rennie. “May God bless her and all who sail in her, said Margie.” 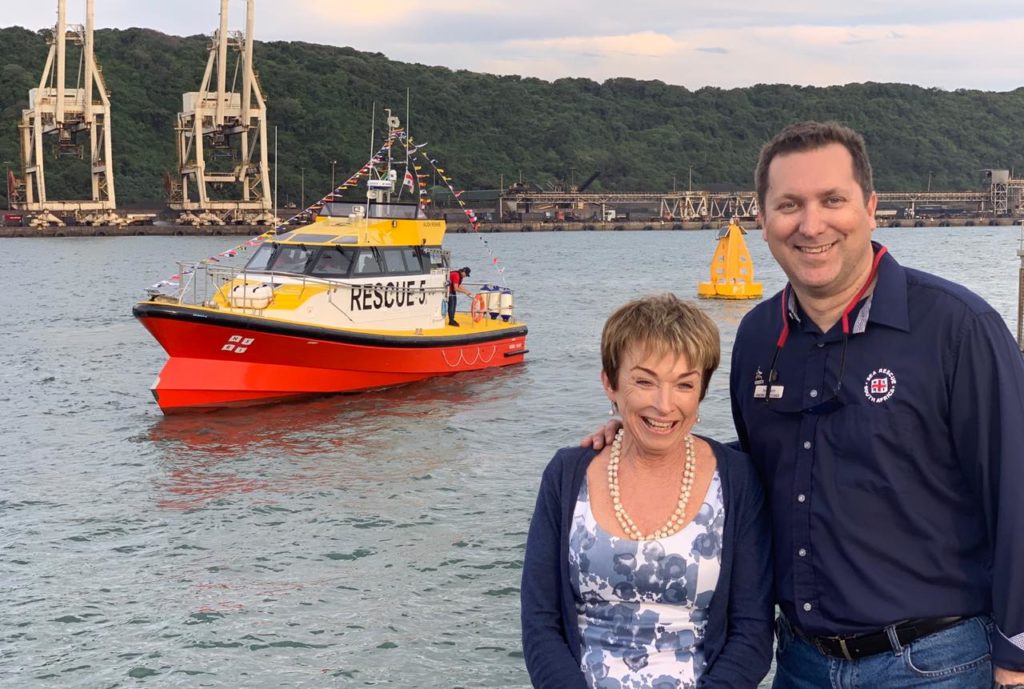 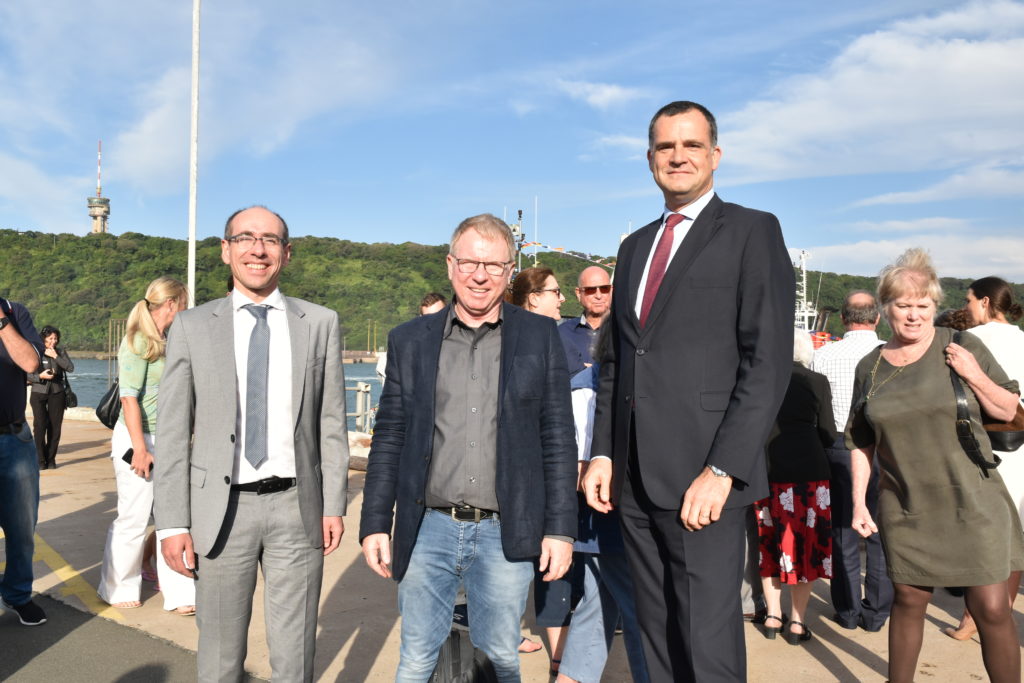