Thank you to Deon Govender,  DJ on East Coast Radio who was our MC for the evening. 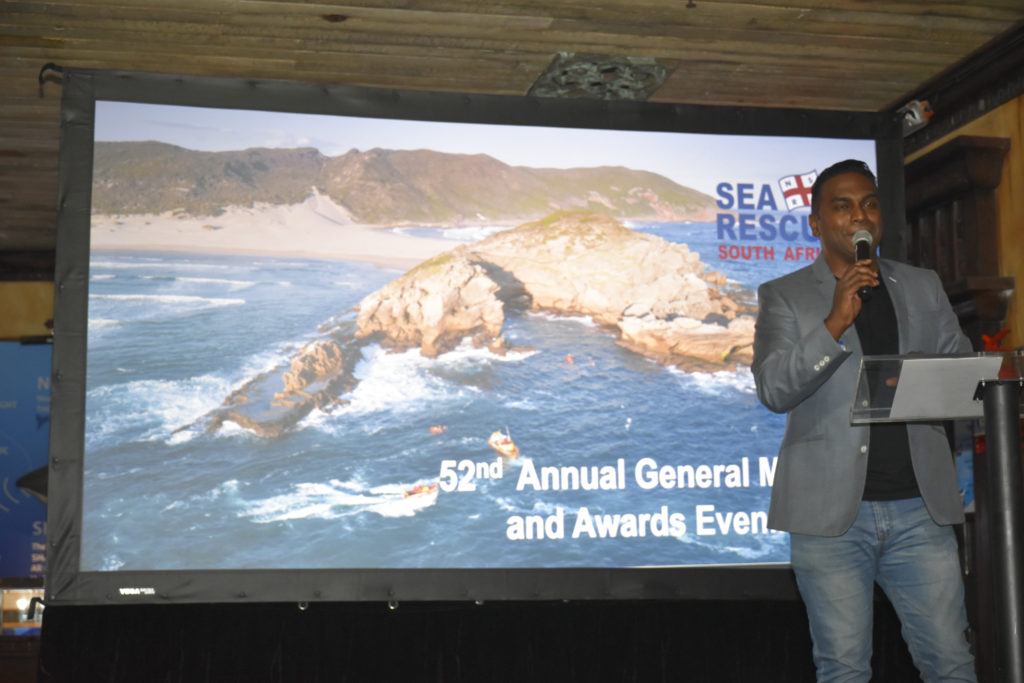 Water Safety Recognition Award:  Luc Lepront for his quick thinking, and willingness to help someone he did not know who was in grave danger of drowning. 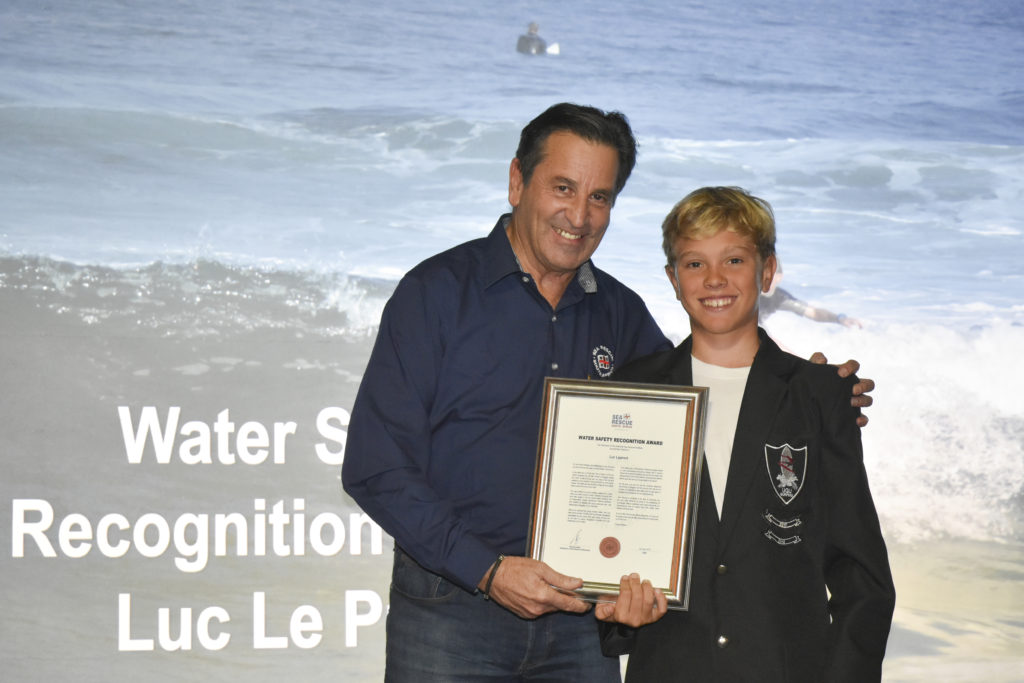 The Directors of The National Sea Rescue Institute
accord their thanks to Luc Lepront for your quick thinking, and willingness to help someone you did not know who was in grave danger of drowning.

In the afternoon of Friday the 15th of March 2019 your mother dropped you off after school at Baggies beach for a surf. It was not long and you were in the rip and paddling to the backline looking forward to some good waves. The swell was big and the promise of some great waves was at the top of your mind.

You were sitting out at the backline waiting for a wave when you heard shouts for help. Friends of a young man who was caught in the rip current were signalling that he desperately needed assistance. Without hesitation you paddled in towards the young swimmer who was desperately struggling in the midbreak.

When you reached the young holiday maker, who you later found out was 16 years old, he had been repeatedly submerged by the waves that were rolling through the rip. He was in a panic, struggling to breathe and had swallowed a lot of water.

Your training as a Warnadoone Lifesaving Nipper kicked in, and remembering the grave danger that a rescuer faces from a panicking patient, you got off your board and allowed him to climb onto it before moving around behind him to push him and your board back to the beach.

By the time you got him into the shallows lifeguards had arrived at Baggies and the young man was put on Oxygen. An ambulance was called and he was taken to hospital to be monitored for non-fatal drowning.
Sea Rescue is delighted to be able to recognise you for your quick thinking, for going to the assistance of a stranger without hesitation and most importantly for remembering how to protect your own safety when helping someone else.

It is not often that we are able to recognise a 12 year old for saving a life, and we take great pleasure in being able to do this now. Congratulations.

Directors’ Thanks Award to: Sage Khowa, Jon Caple, Everett Duarte and Marc Franz, for their bravery and determination when in the early evening of 18 February 2019, they went to the aid of three people caught in a rip current at Marina beach on the KZN South Coast. Using a Pink Rescue Buoy and a surfboard as emergency floatation, two international golfers were rescued and one of the rescuers was assisted from the water.

Sage Khowa, Jon Caple, Everett Duarte and Marc Franz, for their bravery and determination when in the early evening of 18 February 2019, they went to the aid of three people caught in a rip current at Marina beach on the KZN South Coast. Using a Pink Rescue Buoy and a surfboard as emergency floatation, two international golfers were rescued and one of the rescuers was assisted from the water.

Once everyone was out of the water it emerged that two international golfing women, Rachael Raastad and Charlotte Austwick, who were taking part in a local tournament, had gone for a late afternoon swim with their South African friend Werner Welgemoed. All three people had been caught in a rip current and as surf conditions were bad they were unable to get out of the current which pulled them out to sea. The time from when the trio first entered the water to when everybody had been rescued, and Werner managed to get himself out of the water, spanned almost two hours. If it had not been for an informal car guard known as Prince shining his light into the darkness, which allowed the rescuers to see the casualties, and for the bravery of Sage Khowa, Jon Caple, Everett Duarte and Marc Franz the outcome that evening might have been very different.

We are delighted to be able to recognise you all for your quick thinking and bravery, which helped to save three lives, with this vote of thanks.

The Most Improved Station of the year 2018 is awarded to: Station 35 Witbank Dam

The Best RIB Station of the year 2018 awarded to: Station 37 Jeffreys Bay

MARMION MARSH TROPHY 2018 awarded to: Clifford Ireland for his individual noteworthy service to the cause of Sea Rescue in South Africa and his tremendous contribution towards the ORC 140 Project.

Having served as a Crewman, Cox’n and Station Commander at Station 5 Durban, Clifford also immersed himself in various projects in NSRI to the benefit of both his Station and NSRI as a whole. Notably, the Station 5 Boathouse modification project to prepare the Station for their new ORC 140 Rescue Craft, which started in April 2017 and finished in February 2018, for which he received a NSRI CEO’s Letter of Appreciation in 2018.

Clifford then went on to significantly contribute to the new ORC 140 Rescue Craft building project which has culminated in the first 2 ORC 140’s being delivered to NSRI in May 2019.
Clifford has been an integral part of the project team from the day of his appointment, with his ability to look at all the different suppliers’ designs and from his mechanical engineer’s perspective ask different questions to those that the Operations Director, Mark Hughes, was asking, and understanding the sometimes complex answers, has been instrumental in the success of the project. Together they made a strong NSRI team in undertaking the challenge to find a design of off-shore all weather rescue vessel that would work for NSRI for the next 40 years or so.

The ORC project started in July 2014 and over almost 5 years, spending long hours consulting and reviewing designs and submissions from 8 suppliers, Clifford spent 42 days of his personal leave, made several overseas trips to shipyards, undertook countless boat trips, received some 921 emails and dispatched a further 654 in the process of evaluating the suppliers with Mark Hughes to be able to finally decide on our new Class I Rescue Craft design.

This dedication to the project continued with the preparation of all the technical specifications required to confirm NSRI’s requirements for the final selection and design, followed by numerous onsite and remote progress inspections during the building of the first vessel, and finally taking part in the acceptance sea trials in France resulting in the ORC 140 Rescue Craft now completed and delivered.

In recognition of his exemplary and unwavering support of NSRI and this vital project we are delighted this year to present Clifford Trevor Ireland with the Marmion Marsh Trophy, which is awarded annually to a person who or an organization which has rendered distinguished service to the NSRI. We would be hard pressed to think of a more deserving candidate for our 2019 award.

The Alric Simpson Floating Trophy is awarded annually to a person who, or an organisation which, has rendered dis-tinguished service to the NSRI. The Trophy is sponsored by Mrs Eleanor Simpson and her two sons, who wanted to make up an unusual award named in memory of her sea-loving husband Alric, resulting in the Alric Simpson knot board.

This year we honour Reef Wetsuits South Africa, a company started in 1969 as Wetsuits SA and purchased by David Stringer in 1987 to become a primary supplier of wetsuits to the South African water sport market under the brand “Reef”. Reef Wetsuits is a family-run business with a long history. They are fortunate and privileged to have a dedicated, proud and loyal workforce, many of whom have been with the company for more than
20 years.

NSRI sea-going Crew need Personal Protective Equipment which includes wetsuits to be able to endure the fiercely wet and cold sea conditions into which they venture to complete their mission of saving lives at sea. We at NSRI endeavour to provide them with the best equipment that we can afford so our Crews are always able to confidently wear their wetsuits knowing they have the best we can supply.

Since 2005, Reef Wetsuits have become NSRI’s supplier of choice, making hundreds of bespoke wetsuits, booties, gloves, masks, rescue swim fins and UV protection tops for our over 1 261 Crew and Lifeguards at our 41 Bases around South Africa. Reef was chosen because of their quality, cost effectiveness and excellent service. Quality wetsuits can only come from the use of quality materials and in this regard Reef Wetsuits SA is uncompromising. Use of neoprene from the world’s leading supplier and manufacturer, YKK zips and the best of imported inks are the starting point for products that compare favourably with the best brands in the world.

The same inflexible approach applies to their use of the latest technology available, machinery, computer and printing equipment which are constantly upgraded to stay abreast of international developments, enabling Reef Wetsuits SA to compete against the international opposition brands and keep NSRI Crew warm and safe when out at sea. Reef is also one of our suppliers who unstintingly provide us with a costing model unsurpassed and last year saved us in excess of R420 000,00.

It is for this important contribution to the ongoing safety of the NSRI family that we award Reef Wetsuits South Africa this year’s Alric Simpson Trophy, with our particular thanks to the Stringer Family, CEO Barry Stringer, Director Grant Stringer and their father David Stringer, the owner of Reef.

We owe Reef Wetsuits SA a great debt of gratitude for the role they play in ensuring we have cost effective, safe, hard wearing and comfortable wetsuits and associated gear so that our Sea Rescue Crews can go to sea and perform their tasks protected by the best Personal Protective Equipment we can provide.

Directors’ Thanks Award to: Kantey & Templer Consulting Engineers who have through their generous sponsorship and excellent professional services, provided NSRI and Station 5 Durban with free engineering design services since 2004.

The Directors of The National Sea Rescue Institute accord their thanks to:
Kantey & Templer Consulting Engineers
who have through their generous sponsorship and excellent professional services, provided NSRI and Station 5 Durban with free engineering design services since 2004. Kantey & Templer is a leading service driven South African company providing and managing professional, quality engineering expertise to Africa. Through staff excellence and sound corporate governance they convert engineering concepts into reality.

The company was formed by Basil Kantey in 1953. Since then they have built up a long history of successful projects across Africa; serving their clients from the major centres in South Africa.
The projects that have been completed for NSRI since 2004 are:

The total saving to NSRI to date has been approximately R1.2 million in man-hours donated to the projects calculated at the cost rate and excluding any profit mark-up that would have been charged for normal clients.
These sponsored projects have greatly assisted NSRI and Station 5 making the engineering design changes essential to meeting the technical advances required by new equipment and craft to be employed in NSRI’s ongoing commitment to saving lives at sea. Without Kantey & Templer’s generosity and superb professional services, NSRI and Station 5 would not have been able to meet these demands in the cost effective and timely manner achieved.

We once again thank Andrew Smith, Director: Civils and Structures (Durban & Pietermaritzburg Offices), his management and staff for their generous sponsorship and professional services to the benefit of NSRI. 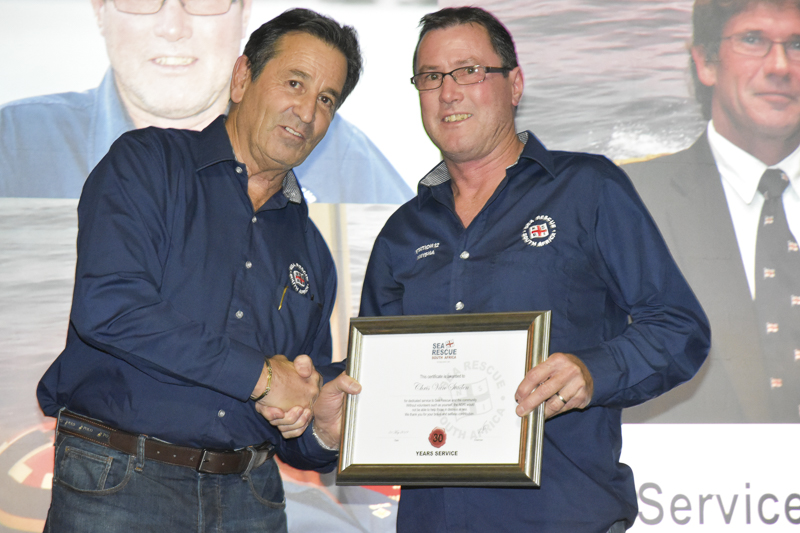 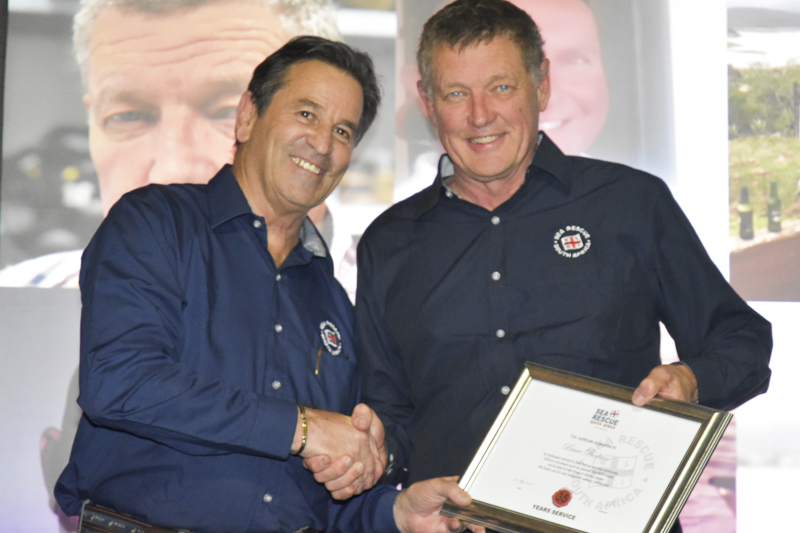 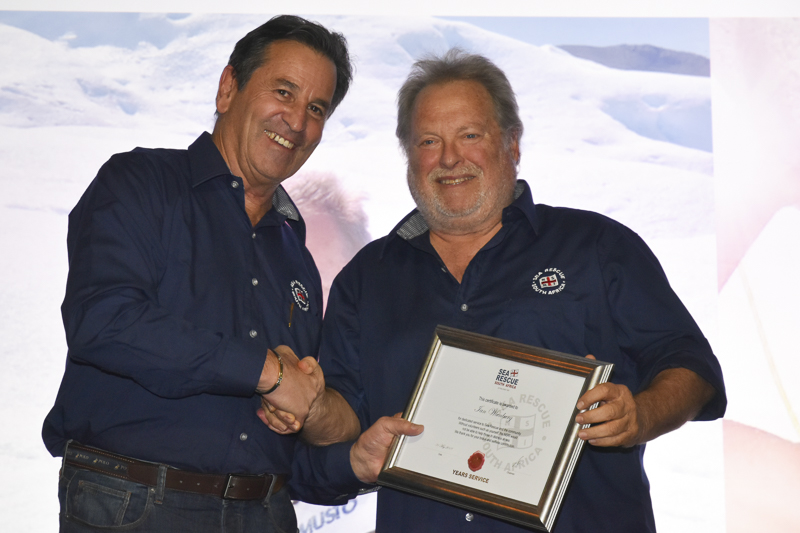