Andre Fletcher, NSRI Durban station commander, said:At 01h49, Thursday, 04 April, NSRI Durban duty crew were activated by the Transnet National Ports Authority (TNPA) following reports of a yacht running aground on the South Breakwater at the Port of Durban with 5 crew onboard, 3 females and 2 males.The sea rescue craft Eikos Rescuer II and Megan II were launched, Police Sea Borderline dispatched a Police Boat and TNPA officials, TNPA Fire and Rescue Services and TNPA Security were dispatched and a TNPA tug boat and a TNPA pilot boat responded.Netcare 911 ambulance services were dispatched to stand-by at the NSRI Durban rescue base.On arrival on the scene we found all 5 crew had managed to abandon the yacht and get onto the dolosse.2 NSRI rescue swimmers were sent ashore and they assisted 1 female who had been trapped in amongst the dolosse and she was freed from her entrapment and the remaining 4 crew were accounted for and safe, they suffered only minor injuries. 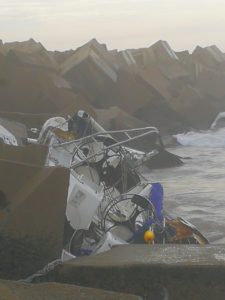 The crew are all locals and we initially believed they had been enroute to Richards Bay and turned around but updated reports have determined that they had reached Richards Bay and were returning to Durban.They were taken away by a TNPA vehicle and we believe family collected them at the TNPA tower in the Port of Durban.The yacht remains wrecked on the South breakwater and salvage options will be investigated.
Share