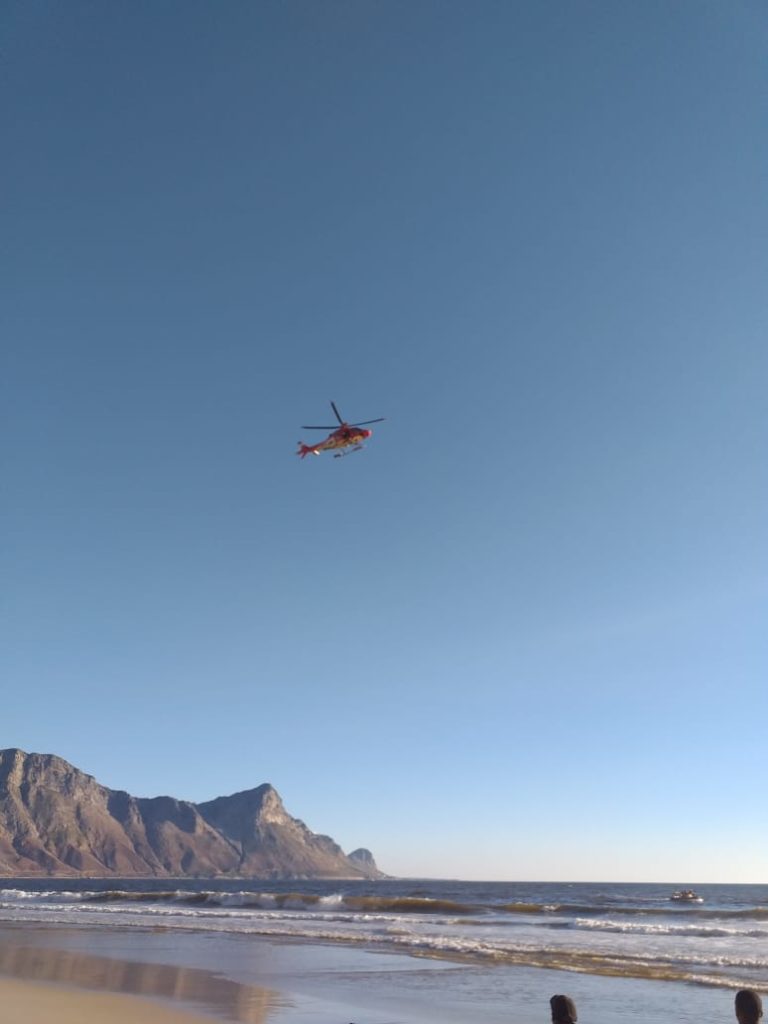 Skymed Rescue helicopter on the scene at Dappat se gat assisting in asearch for a missing teenager.Pic: NSRI Gordon's BayDAPPAT SE GAT:Alan Meiklejohn, NSRI Gordon's Bay station commander, said:At 17h16, Sunday, 03 March, NSRI Gordon's Bay duty crew were activated by the Transnet National Ports Authority (TNPA) following reports of a drowning in progress at Dappat Se Gat, between Gordon's Bay and Koegelbaai.The sea rescue craft Spirit of Surfski was launched and an NSRI rescue vehicle, the SA Police Services, GB Med ambulance and rescue, CoCT (City of Cape Town) Fire and Rescue Services Dive Unit, CoCT Lifesaving lifeguards, WC Government Health EMS rescue squad and the EMS/AMS Skymed rescue helicopter responded.On arrival on the scene a search commenced for a 19 year old male from Kuils River missing in the surf.A 17 year old male who had been swimming with his friend, the missing teenager, was found safe ashore and he was treated by paramedics for hypothermia and he required no further assistance.During a day out with friends the 2 teenagers had been swimming together when they were caught in rip currents, the 17 year old was able to get ashore but his 19 year old friend had disappeared beneath the surf.Despite an extensive sea, air and shoreline search no sign of the missing teenager has been found and a Police Dive Unit are continuing in an ongoing search operation.Police have opened an investigation and family of the missing teenager are being supported by Police trauma counsellors.WITSAND:Thys Carstens, NSRI Witsand duty coxswain, said:At 11h05, Saturday, 02 March, NSRI Witsand duty crew were activated by the Transnet National Ports Authority (TNPA) following reports of a fishing kayak capsized at Hen en Kuikens, just inside of The Bar, Breede River Mouth.The sea rescue craft Falcon Rescuer was launched and it was determined that a private boat had assisted the single fisherman after his fishing kayak capsized and they had taken him onboard their craft.We rendezvoused with the private boat and the fisherman was transferred onto our sea rescue craft and brought to shore, he was attended to by our NSRI medics and following treatment he required no further assistance.We re-launched Falcon Rescuer and following a brief search we found and recovered his sea kayak which we returned to the fisherman and no further assistance was required.TO REPORT A SEA RESCUE EMERGENCY DIAL 112 FROM A CELLPHONE
Share