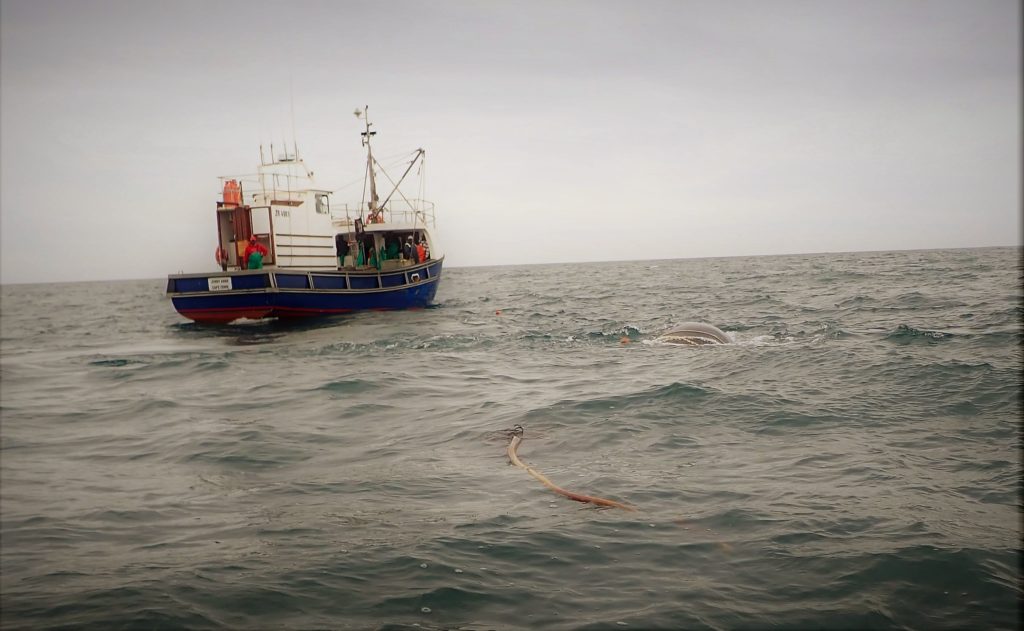 SAWDN - Dassen Island - Thursday, 06th December. Humpback whale rescued in a disentanglement operation:Mike Meyer, Director of Operations, SA Whale Disentanglement Network (SAWDN) said:At 08h45, Thursday, 06th December, SA Whale Disentanglement Network (SAWDN) volunteers were activated following reports from a fishing boat of a whale entangled in fishing line and rope off-shore of Dassen Island on the West Coast.SAWDN launched from Yzerfontein harbour aboard two NSRI Yzerfontein sea rescue craft, the Rotary Onwards and Sonja,On arrival on the scene, 3.5 nautical miles South West of Dassen Island, the 9 meter Humpback whale was located in rough sea conditions.Locating the whale was made easier by the fishing boat who discovered the whale entangled, they had stayed with the whale that was found to be trapped in fishing line anchored to the sea bed.The whale had 3 rope entanglements around the back, one rope through the mouth, and 3 lines anchored to the sea bed which held the whales tail deep beneath water surface. A clump of rope was found tangled amongst the 3 ropes around the back of the whale.To get proper visuals the SAWDN rescuers were required to hang over the sea rescue craft using goggles to see under water, in poor water visibility, to get accurate estimations of where to cut.In a difficult disentanglement operation, one of the most difficult operations we have encountered to date, in a disentanglement operation lasting over an hour, using the SAWDN disentanglement equipment, a rope line through the mouth was cut first in two places, releasing that rope, and then the rope lines around the back of the whale were cut, and the whale was freed from the entrapment and all fishing rope was released from the whale and recovered.The fishing boat remained on-site throughout the operation assisting and advising and they are commended for their contribution to the successful outcome.Once all rope was cut free and recovered the whale appeared to be healthy and swam off strongly and SAWDN are confident of the whales survival.The South African Whale Disentanglement Network (SAWDN) was established in 2006 in order to manage entangled whales using specialized equipment and is comprised of trained volunteers from the - National Sea Rescue Institute, KwaZulu-Natal Sharks Board, Department of Environmental Affairs, Centre for Sustainable Oceans at the Cape Peninsula University of Technology, Cape Nature, Mammal Research Institute, South African National Parks, South African Police Service, Department of Agriculture Forestry and Fisheries, Cape Nature, Bayworld, Telkom Maritime Radio Services, various Boat Based Whale Watching and Shark Cage Diving Operators, the Rock Lobster Industry and the Octopus Industry and fully supported by the Dolphin Action and Protection Group.SAWDN COVERS THE ENTIRE SA COASTLINEWhales assisted to date: 173
Share