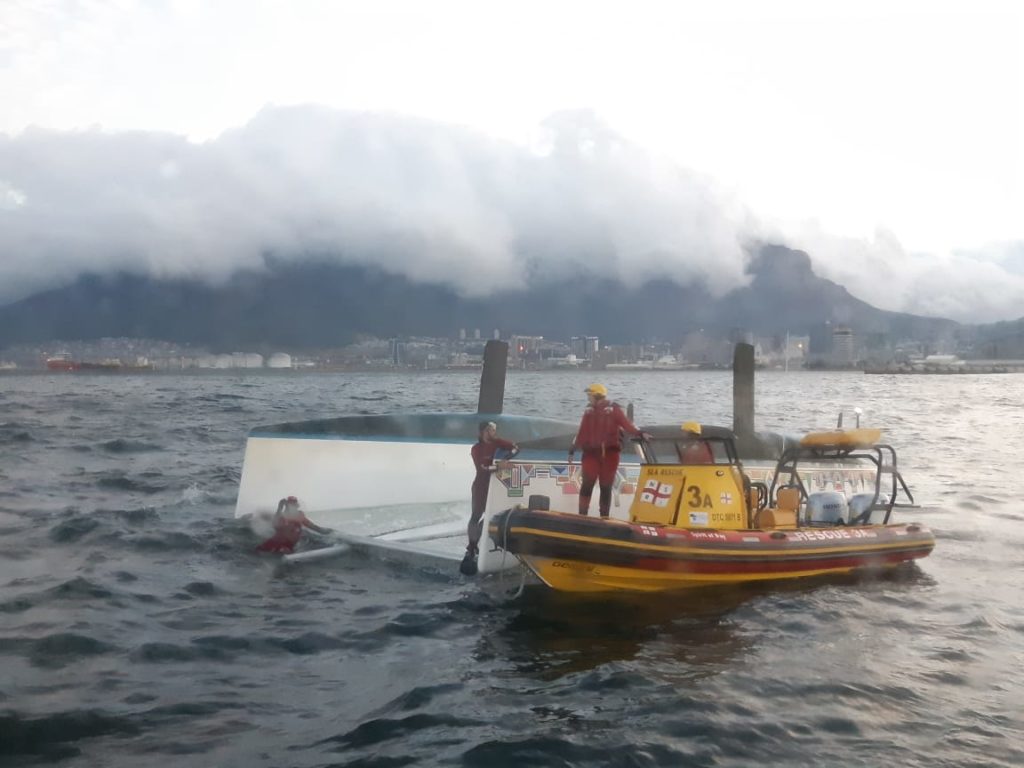 Tuesday, 27th November. Update - Catamaran capsizing, Port of Table Bay:Following the rescue operation that saw all 8 survivors safely rescued from the capsized Catamaran, NSRI Table Bay, using the 2 sea rescue craft Spirit of Vodacom and Spirit of Day, towed the casualty capsized Catamaran to Granger Bay outside the Port harbour entrance and secured her using an NSRI spare anchor and an anchor provided by the Catamaran charter company. Lights were secured to the casualty Catamaran to mark the navigational hazard preventing ships and sea traffic from colliding with the casualty Catamaran.NSRI rescue swimmers were deployed into the surf to secure towing ropes, the effort was made difficult by the draft of the mast and sail rigging below water.We believe Salvage efforts, in conjunction with SAMSA (South African Maritime Safety Authority) and the owners, will be made for the Catamaran to be righted and moved today.This morning, Tuesday, 27th November, the Catamaran remains secure where she was anchored last night and the change in winds to a North Westerly have not shifted her position.During the night, after securing the casualty Catamaran, NSRI Table Bay duty crew followed up with the casualties, the British tourists, who were still being cared for at the hospital.The owner of the guest lodge, where they are staying, had taken a taxi to the hospital, to check on her guests. Following their care in hospital they needed transport to get home to the guest lodge. NSRI Table Bay coxswain Pat van Eyssen and NSRI Table Bay station commander Quentin Botha, after completing the securing of the capsized Catamaran, they drove to the hospital at 23h55 and transported the 5 casualties and guest lodge owner to the guest lodge.One female has suffered a fractured shoulder in the ordeal and she is being treated for the fracture. They were bruised and shaken up by the ordeal but full of praise for NSRI and the emergency services rapid response and after care, said Quentin Botha, NSRI Table Bay station commander, and we remain at their disposal should they require any assistance further, said Quentin.It has emerged that the one female had been below decks when the Catamaran capsized and she was trapped in the galley where water was rising as the cabin filled with water causing a fast diminishing air pocket that had provided some relief. From what we understand we believe that the skipper of the Catamaran had free dived under the Catamaran after she capsized and he was able to bring the mom out from below decks.The skipper of the Catamaran is commended for this effort.NSRI Table Bay crew volunteers were at the Table Bay sea rescue station at the V&A Waterfront when the initial call came from Port Control at 18h49.We were able to launch 2 sea rescue craft immediately, said Pat van Eyssen, NSRI Table Bay duty coxswain, and we are confident that the quick response made a significant contribution to the success of the rescue operation.A Police Dive Unit, WC Government Health EMS rescue squad and Cape Town Fire and Rescue Services dive unit responded to our sea rescue base to kit up in case a scuba dive rescue operation was required but after all casualties were accounted for and safe they were able to turn their attention to caring for the casualties, said Quentin.The Police Dive Unit stood down prior to their arrival on the scene after it was confirmed no persons were trapped below decks.ER24 ambulance services dispatched response paramedics and ambulances to the ER24 mobile medical clinic station at Nelson Mandela Gateway to stand-by to receive any critically injured patients and after it was confirmed that all survivors were only moderately injured and hypothermic they responded to our sea rescue base to assist EMS paramedics, NSRI medics and the Fire and Rescue Services paramedics with treatment of the patients at our sea rescue station, said Pat.SAMSA (South African Maritime Safety Authority) are tasked to investigate the capsizing of the Catamaran.See original media statement below...
Pat van Eyssen, NSRI Table Bay duty coxswain, said:
At 18h49, Monday, 26th November, NSRI Table Bay duty crew were activated by the Transnet National Ports Authority (TNPA) following reports of a sunset cruise Catamaran capsized in the Port of Table Bay, at the breakwater entrance to Table Bay Port, and casualties reported to be in the water.
The sea rescue craft Spirit of Day and Spirit of Vodacom were launched and WC Government Health EMS rescue and EMS ambulance, Cape Town Fire and Rescue Services Dive Unit, ER24 ambulance services, a Police Dive Unit and the SA Police Services responded.On the sea rescue craft arriving at the capsized casualty boat 8 persons - 3 local male crew members, and 5 tourist passengers from the United Kingdom, 2 males and 3 females, were found on the upturned hull of the boat, all were wearing life jackets, they were rescued off the upturned hull and taken onboard the sea rescue craft and brought to the NSRI rescue base at the V&A Waterfront where all were treated by paramedics for mild hypothermia and 2 of the local crewmen were treated for non-life threatening injuries.It was confirmed that all crew and passengers were accounted for and the Police Dive Unit stood down on confirmation that no persons were trapped in the hull of the boat.The 3 local male crew, including the skipper and his 2 crewmen, were treated for hypothermia and 2 were treated for non-life threatening injuries, they have been transported to hospital by ER24 ambulance.The 5 passengers, 3 females and 2 males, were transported by ER24 ambulance and by EMS ambulance to hospital as a precaution.Tourism officials are assisting the tourists and the British Consulate are alerted to render assistance to their countrymen.V&A Waterfront Security assisted at the NSRI Table Bay rescue base.SAMSA (South African Maritime Safety Authority) are alerted and an investigation into the cause of the Catamaran capsizing will be conducted.The Catamaran has been towed to a Pier in the Port of Table Bay in the capsized position and efforts to secure the yacht are being made.