We will soon be releasing the new SafeTrx 2018r2 release to the following markets: Australian Volunteer Coast Guard and the NSRI (National Sea Rescue Institute) in South Africa.On the request of many in the SafeTrx community, the upcoming release includes a new 5-minute tracking interval in Track Only mode.The SafeTrx 2018r2 release also includes new features, improvements and bug fixes to the app as a result of feedback from end users. The SafeTrx team want to make sure that its users feel safe from the moment they start a trip until they arrive at their destination.Improvements have been made to the Sail Plan mode allowing users keep their friends and family up to date with any changes they have made to their trip. In the 2018r2 release, any adjustments to the ETA, people on board, waypoint and destination will be texted to their emergency contacts.A new safety feature has been added to Flotilla Event. Rescue boats will now be visible to race organisers on the SafeTrx Flotilla map. This feature allows race organisers to track the safety boats and differentiate between participants and safety vessels. Improvements have also been made to Flotilla Event; the Flotilla event code entry is now clearer and displays in bold so that it stands out to the end user.The SafeTrx team is interested in any feedback users of the app may have, so users now have the ability to rate their experience with the app via Google Play and the Apple App Store review stars. 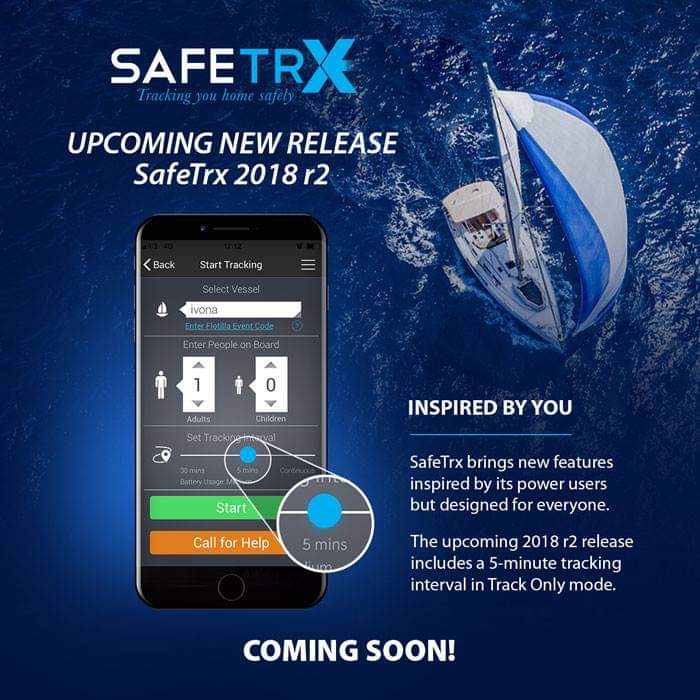