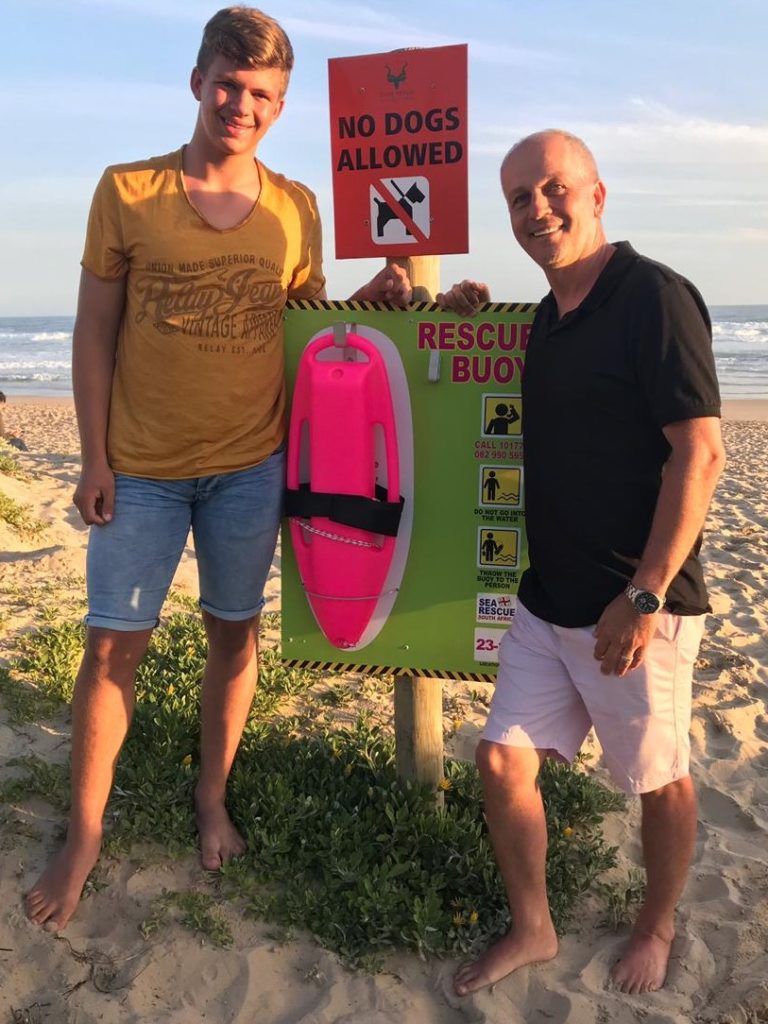 Jaden Delport, 16, and his dad Henrico, 51, from Centurion, are on holiday with family in Wilderness - today they saved the life of a teenage girl. They used the NSRI Pink Rescue Buoy as flotation.WILDERNESS:Mike Vonk, NSRI Wilderness deputy station commander, said:At 14h10, Friday, 05th October, NSRI Wilderness duty crew were activated following reports of a drowning in progress at Wilderness Beach.While dispatching crew, we were informed that the casualty was safely ashore and a sea rescue response was stood down.The following has been recounted :Jaden Delport, 16, and his dad Henrico, 51, from Centurion, are on holiday with family in Wilderness. They were at the beach on Friday afternoon when Jaden noticed someone being swept out to sea by a rip current. Jaden immediately responded by rushing into surf and swimming towards a teenage girl who was being pulled out to sea by rip currents while she had been swimming in the surf.His dad, concerned for the safety of both his son and the girl, grabbed an NSRI Pink Rescue Buoy, which is positioned at the entrance of the beach, and he ran into the water after the two of them.By that stage Jaden had reached the casualty who had been pulled out some distance half way towards the backline. Jaden found her to be exhausted from fighting against the current and she was struggling to swim and struggling to stay afloat. He tried pulling her back towards the shore but the rip current that they were in was too strong and he couldn’t swim against it. He then tried to just push her towards the beach in the breaking surf.Henrico arrived and passed her the Pink Rescue Buoy and, holding onto the strap, he helped to pull her towards the shore. They reached a sand bank and once on the sandbank the breaking surf, breaking over the sandbank, pushed them onto the beach.The girl was exhausted and reunited with her family. After onlookers gathered she was whisked away and she left the beach with her family.NSRI have not been able to get the details of the girl but interviewed eye-witnesses, Jaden and Henrico.As this rescue started to unfold, a member of public, Casey, 27, from Cape Town, and a regular visitor to Wilderness called the emergency telephone number on the Pink Rescue Buoy sign board.NSRI commend Jaden, Henrico, and Casey for this tremendous effort to save this girl's life.NSRI are aware of 13 lives saved directly from this Pink Rescue Buoy campaign.Pictures are available on our Flickr page https://www.flickr.com/photos/searescue/
Share